Beautiful, traditional production which neither skimps on pageantry nor fails to find the humour in the tragedy.

The production which will close the Globe’s 2015 summer season balanced pomp and pageantry with honest humanity to create a consistently engaging, multifaceted, surprisingly funny take on the Shakespeare’s history. It began unorthodoxly, with an added scene of Richard II ascending the throne at the tender age of ten. Then, in a fanfare of horns and a shower of gold confetti, the child king was replaced by the adult king and the play continued as usual. This opening, combined with Charles Edwards’s masterful portrayal, highlighted the reality of Richard’s reign: this was a child who came to absolute power, and a man who learned the ways of the world through it. However callous and self-centred his actions, they were not driven by malice but by confusion in a world which he never really understood. His actions were not excusable but neither deserving of his fate. 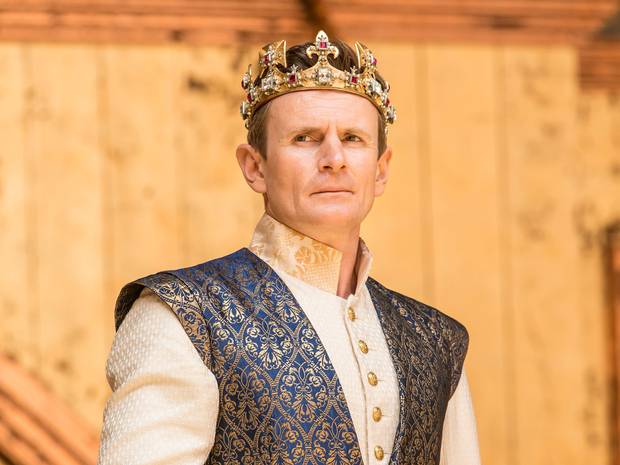 The cast – many of whom were double or triple cast in widely disparate roles – were perhaps the strongest element of the production. Every member approached their roles with honesty and high energy, carrying the 2h 45min run time with ease. Edwards conveyed a flippant self-confidence at the start, but as Richard’s fortunes faded his façade cracked, revealing a scared child who nonetheless tried to act like a king. As his rival Bolingbroke, David Sturzaker gave us not England’s saviour but another man out for his own interests; while he had the moral high ground, he was just as flawed as every other character.

The staging was bright and bold. Upon entering the auditorium, the audience was overwhelmed with gold. Gold confetti covered the stage and yard – even raining down from the balcony at certain points, as mentioned previously – the backdrop and protruding stage were dazzlingly painted. The pageantry was heightened by the horn music, playing as fanfares as well as powerful accompaniments to certain speeches, such as Richard’s supremely poignant one at Flint Castle. Despite the high luxury and pathos, the humour was not overlooked in this production, notably in the gauge-flinging sequence and the gardener’s scene. These refreshing laughs ironically highlighted the tragedy, making the next punch which fell even more painful.

On the whole, this was a superb, nearly-faultless production of a classic tragedy which steered away from moralising or social commentary to look closely at one man’s downfall.