Running the gauntlet of the free fringe, Hanna Winter knows how to face a tough audience; in front of a room full of pub goers, who freely walk in and out of her performance, she never once falters in her comedic retelling of the early life of a famous Hungarian rock musician, using his experiences as an entry point to explore the cruelties and hardships of life under Communist rule in post-1945 Eastern Europe.

Running the gauntlet of the free fringe, Hanna Winter knows how to face a tough audience; in front of a room full of pub goers, who freely walk in and out of her performance, she never once falters in her comedic retelling of the early life of a famous Hungarian rock musician, using his experiences as an entry point to explore the cruelties and hardships of life under Communist rule in post-1945 Eastern Europe. 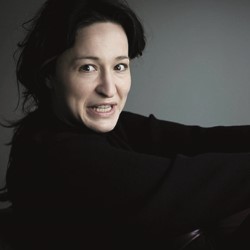 Under Winter’s careful guidance, a cast of characters in brought to life during the course of this one woman show; her firm sense of differentiation for each, from hand gestures to voice and stage placement, doesn’t allow the audience to falter between character switches and allows her to revisit her cast throughout the 50 minute performance with ease – no easy task at the end of a long Edinburgh day. Her script shows a skillful balance between moments of comedic reflection and stark portrayals of the reality of life under Soviet rule, bringing the audience along with her on a narrative roller coaster that stretches from a child’s separation from politically vocal parents to coming of age himself in the restrictive society, eventually finding his path as a rock musician.

Music forms the heartbeat and structure of this show, with Hanna’s cardboard guitar and her confident voice illustrating the importance of music to her principle character. Potentially these interludes last a little to long, and risk letting the audience lose the thread of the story. More defined cuts with her technician could improve the already slick feel of the show, and bring more urgency to the development of the story line.

The performance also seemed to falter slightly about three quarters of the way through, where the story’s sense of direction and purpose, as well as a few audience members, were lost. It is hard to tell which loss precipitated the other but in general Winter faced the ebb and flow of her audience, which is a natural challenge of free fringe theatre, without a falter. In fact, her astonishing ability to keep a room of rowdy men in their seats, who perhaps don’t fit the stereotype of a typical physical theatre, character-based one woman show audience, is testament to her magical draw onstage.

I think this piece will develop an incredible amount over its Edinburgh run; in particular, it would be interesting to see how the ending might land with more impact, as currently it could stand to hit a higher climax, and be brought to a firmer conclusion. Yet this debut piece for Hanna Winter is an incredibly strong start for a talented physical and comedic performer.