Conceived as a True Crime documentary retelling of Jack and the Beanstalk, Citizen Puppet delights and amuses, and is definitely one for the puppet sceptic and expert alike.

Conceived as a True Crime documentary retelling of Jack and the Beanstalk, Citizen Puppet delights and amuses, without falling into the all too common mistake of simply adding in some dirty jokes to break the story’s innocence. This is by no means a simple adult take on a fairy tale, but a complex exploration of small town politics, as well as an accurate satire of the suburban reaction to crises. Expect to be financially schooled in Golden Egg ISAs and recognise the features of a post 9/11 society where mass traumas are endlessly discussed and analysed, but above all, expect to leave with huge admiration for the work of the cast and crew. 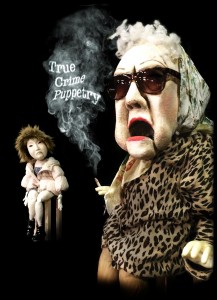 After a initial introduction to the puppets, a fast-paced and punchy scene allows the characters to find their voices and establish themselves on stage. This was some of the most skilled puppeteering I’ve ever seen; the puppeteers disappear to leave your focus solely on the puppets themselves, as chairs and benches are lifted around with an ease and synchronicity that can only be achieved by a truly dedicated and practiced team.

The play is part-narrated by central character ‘Daz’, a drug addicted but kind-at-heart citizen of Massiville who is bringing the community together after the tragic Beanstalk Incident by staging a play within a play. This leads to some hilariously entertaining ‘direction’ scenes, and allows a structured narrative to develop around a story that would otherwise be in danger of dividing into a multitude of sub-plots.

Puppeteers Fiona Clift and Laura Caldow deserve a special mention; their female characters’ nuances and movements were so polished and life-like, and their scenes were a particular pleasure to watch. Jake Waring’s character development of ‘DI Clive’ showed a real sensitivity to the story arc of the show, bringing an initially gruff character slowly into the audience’s heart through his portrayal of a policeman helpless before a previously unimaginable crime.

Rachel Good and Mark Down’s design add some magical touches that will bring a smile to your face, most notably the tiny cigarette brandished by ‘Dinah’, the pub landlady, and Samuel Dutton’s easily missed but skillful use of wheelchair wheels to propel ‘Howard’ across the stage.

Whilst the conclusion reached a poignant and sensitive comment on small town communities, I feel that its resolution may have been a little too rushed, with big jumps in the story risking a loss of impact on the audience. I hope with more performances, Citizen Puppet will find a way to land the story’s conclusion a little more firmly. That being said, I left with a strong sense of the underlying messages of the play, and would urge you to see this rightfully lauded and expertly executed piece. It sneaks up on you with surprising seriousness, for a play that aims to retell a fairy tale, and is definitely one for the puppet sceptic and expert alike.

Citizen Puppet will be continuing its run at the Pleasance Courtyard at 17.00 until the 30th August (please note there is no show on the 17th August. Tickets cost between £9.50 and £12 (£7.50 – £10 conc) depending on the date, and can be purchased from the Pleasance Box Office – Buy Tickets

Design: Rachel Good and Mark Down

Assistant to the Director: Alejandra Prieto