Review of: Aaand Now For Something Completely Improvised

They manage to both give the impression they have no idea where the show is going, whilst simultaneously weaving threads that you didn't even know existed until the big finish. Once again, they have proven themselves to be the charmingly intimidating kings of the improvisational scene.

At the Edinburgh Fringe you always get a good feeling when you overhear someone at the box office buying the last tickets for a performance you are about to see. After several sell-out seasons at Edinburgh, this all-male company are old hands at negotiating the festival and certainly haven’t given themselves an easy year, with every member also involved in at least one other show. Having grown up out of the Oxford Imps university comedy troupe, they are almost a graduate incarnation, having taken subsequent imps leavers with them into a professional performance career. 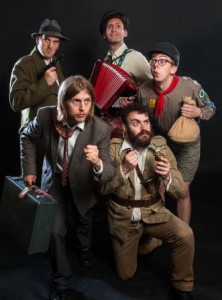 Aaand Now For Something Completely Different starts as soon as you get through the door – no chance to silently slide into your seat, you’re enthusiastically greeted by the cast roaming the auditorium, bedding themselves in with their audience with a range of charming upper class personalities and setting an intuitive precedent of rapport that negotiates any feelings of victimizing or pressure when relying on audience participation. It’s not often I get to issue this warning, but beware of flying sweets.

Racing Minds takes a handful of audience suggestions at the beginning of the show, and then weaves an entirely improvised narrative around these few story markers, inventing a range of characters and sub plots. Much use is made of the traditional ‘box of hats’ to mark character changes, but some especially inventive use marked some real high points of the play, with a cobbled together American flag made of various scarves and a walking stick the best use of ‘raiding the costume box’ I have ever seen.

Despite a promising beginning,  a couple of scenes had a slight tendency to drag, and by the halfway point it seemed that they had committed the improvisational cardinal sin: not know how to progress the story to its pre-agreed conclusion. I worried that the overall story arc had been compromised for incidental inter-character challenges and the pursuit of one-liners. I had clearly forgotten who I was watching: in the final scenes, Racing Minds effortlessly revealed that everything down to character names, seemingly dreamed up in the first scene, and other inconsequential details, wrapped up into a complex and clear conclusion. They manage to both give the impression they have no idea where the show is going, whilst simultaneously weaving threads that you didn’t even know existed until the big finish. Once again, they have proven themselves to be the charmingly intimidating kings of the improvisational scene.

Every member of this tight cast has their own set of typical roles, although I have seen them all take on some challenging characters over the years; Douglas Walker is an effortlessly affable and eccentric authoritarian, with a flawless talent for accents. Tom Skelton plays the hapless and naive with a particularly nice line in damsel-in-distress face clutching. In this particular day’s show, Daniel Nils Robert manipulated his imposing stature into playing a 6 year old boy, and in general his female characters are amazingly comedic, with more than a nod to Terry Jones in drag for Monty Python. Chris Turner is a mesmerisingly physical actor to watch, who brings his characters alive with some wonderful facial expressions, and Dylan Townley adds an improvised musical score (as well as the occasional chicken impression, Hungarian proverb and politicized rant about immigration and the policies of Labour candidate Jeremy Corbyn) from his musical corner, complete with piano and accordion.

They are all very willing to pull each other up on narrative inconsistencies whilst on stage, which gives a lovely non-deferential nod to the challenges of performing without know what you are going to say. However, this had a slight tendency to spill over into intellectual arguments (on topics as diverse at native American populations, pre-digital reprinting techniques, David Foster Wallace and chocolate), and whilst the players are clearly extremely knowledgeable, sometimes the show could benefit from being ‘less accurate and more funny’, as the Mr Cooper character himself implored in Thursday’s show.

I started with an incredibly high opinion of Racing Minds, and they have once again exceeded my expectations with some of the finest improvisation of the UK scene. They continue to develop and challenge themselves, and have truly earned their reputation as one of the must-see shows of the Fringe.

Racing Minds will be continuing their run at the Pleasance Dome at 12 noon until the 31st August. Tickets cost between £7 and £9 (£6-£8 concession) depending on the date, and can be purchased from the Pleasance Box Office – Buy Tickets