An enthralling trip down the rabbit hole.

Sitting in the bar at Theatre Delicatessen waiting to enter the theatre there was an excited hum amongst the assembled audience members. When a company member entered the room and informed us that there would be a cloakroom for our bags because ‘we would definitely be needing our hands’ the hum began to buzz. 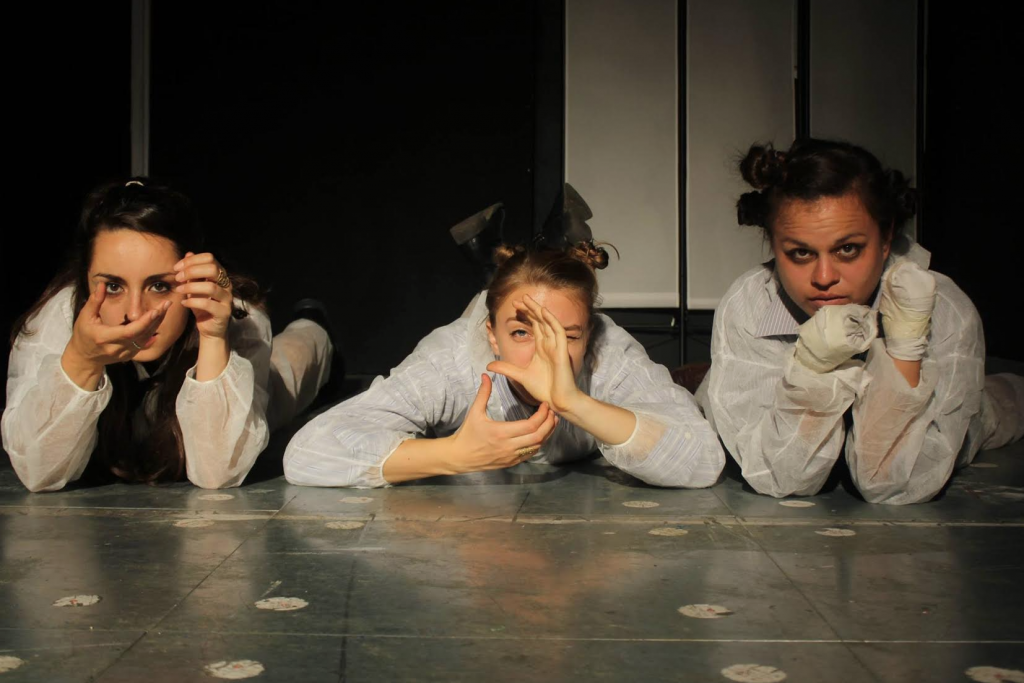 Bags dropped and hands free we waited in the entryway to the space. We were greeted by a spoken word poet who recited a brief yet moving summary of the concept of the show – that we exist in a society that has become disconnected from the self and society, and have essentially become ‘slaves to the system’. Very exciting. Very Matrix-esque.

With his departing mantra ‘don’t get lost’ ringing in our ears, we entered the rabbit hole. Anyone familiar with the work of companies such as Punchdrunk could draw parallels with Infinite Experience’s interactive staging of ‘Welcome Home’. The space was divided into multiple intricately decorated worlds, each representing a facet of this dystopian reality. There was the world of wall- building where audience members were encouraged to help construct a wall of plastic packing crates in order earn tokens. These tokens were used to interact with the other areas and purchase an oxygen substitute that the workers of this world relied upon to breathe.

Guided by the ‘citizens’ we were led into hidden enclaves where workers subtly whispered that things were not as they seemed – a malevolent undertone to this totalitarian state fast became apparent. This was highlighted at one point by the death of a worker who was suffocated by the ever increasing price of the oxygen stand-in. No money no air.

The show began to peak after this public death as the workers united in rebellious force against the powers that be. As the lights dimmed surrealism took over and audience members were invited to close their eyes … what happens next I will let you discover for yourself.

Infinite Experience describes itself as ‘a new company who came together due to a shared drive to want to do something about the financial crisis, the environmental crisis, and the general disconnect that we have with each other at the moment’. Through their interactive art experiences they aim to challenge audience understanding of their connection to each other and the planet.

This is no mean feat. And whilst I thought the experience was entertaining, the costumes and set fantastically detailed, and the actors committed and engaging, I’m not convinced my perception of identity and freedom was totally challenged. The main problem in tackling these ‘big’ issues and ideas is that comparisons to what has come before – 1984, Brave New World, even The Hunger Games – are too easily drawn. The notion that we live in an autocratic system that needs to be challenged and subverted may be true and noble but is certainly not novel and perhaps a little naive.

Where I thought this company was truly successful was in its styling, direction and theatricality. It undoubtedly nudged the boundaries of what is comfortable audience interaction. Whilst engaging with actors may not be everybody’s cup of tea, I found it to be exciting and at times euphoric. The use of poetry and heightened style were well integrated and the immersion was incredibly well done. Laura Reeves’ direction was cohesive and impressive and the actors’ development of their characters and dedication to the style of this world was marvellous.

To anyone wondering whether they should go and get lost in Infinite Experience’s ‘Welcome Home’ world, I would strongly suggest that you do.