Review of: The Trial

Richard Jones’ The Trial is a conveyor belt of madness and Rory Kinnear’s body an expressionistic, warped, tortured frame on a stage that contrasts the ordinary with the unreal. 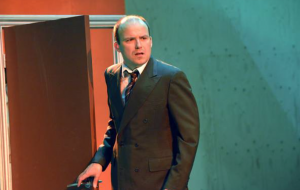 The story of The Trial is famed: a civil servant (here an Associate Vice President of a Bank) Josef K is arrested one morning whilst in bed, his crime is a mystery. He spends the rest of the time trying to understand the machinations of his court case, and his crime, until his eventual execution. But this production’s opening scene does not begin like the book (why should it?). Instead of Josef K being rudely awakened from his sleep, we have Rory Kinnear, legs splayed, gazing at the slightly over the top antics of a female dancer, as if in some brothel or cabaret bar.  We are perhaps meant to think of Kafka and his complicated, distant relationships with the fairer sex, whilst reminding us of, in an image that keeps recurring, the observations of 19th Century psychiatrist Charcot, who introduced the world to the hysterical woman. Ideas that Kafka, who “would rather be a bug or skeleton than an object of female desire” would have been familiar with.

And all of the younger female characters, including a toilet cleaner and his neighbour, all played by an energetic Kate O’Flynn, display the same levels of hysteria, with varying degrees of sexual desire and within varying forms of entrapment. Yet, in Joseph K’s mind and perhaps in Kafka’s too, they are all the same woman. And Rory Kinnear’s Josef K always reacts with the same kind of passive aggressiveness: he doesn’t want to offend, he doesn’t quite want to acquiesce, or not always. They, the women, are almost always too much. Even the scene where he throws himself, with a little enticing, at his lawyer’s niece, seems to be more reluctant, rather than active, engagement.

What we seem to have then, rather than a religious or a political allegory, is a sexual one, and concerning Kafka’s own relationship trial with one woman in particular, Felice Bauer. The two were engaged to be married, before Kafka was summoned by his prospective bride and those with a vested interest in opposing the conjoining, to be told, inexplicably, it was off.

And the thrust of the production seems towards spectacle rather than fashioning an atmosphere of fear, or absurdity. Miriam Buether’s conveyor belt is as much a moving catafalque as it is a corridor of political power, and the seats the audience occupies are as much pews in a modern crematorium, as they are benches in a courtroom. The courtly figures are humorous, Steven Beard in particular excels. And other “criminals”, all arrested in the same manner, are petty and boringly submissive, as if steamrolled by the invisible force that binds them. Director Richard Jones is always preoccupied with kitsch, with trinkets and ornaments, emblems of middle class materialism and values. Sian Thomas’ lawyer Mrs Grace, looks like she’s just stepped off a Mary Berry cooking program, her living room cluttered with china German Shepherds or Bassett Hounds (Josef K felt like a dog, as did Kafka) Cruft’s, or something like it, plays on the TV. You think of David Lynch’s Eraserhead, the scene where the young man stares bewildered at the father over the kitchen table. It has the same suffocating essence you might find in a Martin Parr documentary. But it perhaps  relates directly back to the seance’s Kafka used to attend: stuffy claustrophobic affairs, here transposed into stuffy English affairs.

In the end, Rory Kinnear  is part Kafka and part Josef K. Nick Gill’s new version has him speaking his internal thoughts out loud in almost Pidgin English meets a Beckett kind of poetical gibberish. Which is appropriate because for Kafka, writing  (and expressing his inner thoughts and feelings) became a substitute for speech and action, for life itself. Whenever you hear Rory Kinnear mesmerisingly utter those fragmented speeches, it is like listening to the voice of Kafka himself. It is also when we know Josef K best.

And the branding and the binding, carried out by Titorelli at first (an exuberant Richard Cant dressed like a German Goth) as a stamping on Josef K’s flesh and then the final binding, which Josef K willingly submits to, is the most pertinent symbol and the most eerie.

Michael Coveney brilliantly observes that ‘Josef K is being victimised for his potential to love.’

It’s the fact that it’s not returned, or how Josef K would like it to be, that is the tragedy. Yet Josef K cannot do anything else, he cannot be anything but reasonable in an unreasonable world. He watches, he ums and ahs with bewilderment, with incredulousness at the world around him. And when he finally feels he might be understanding it, it’s too late.

If ‘being victimised for his potential to love’ is Josef K’s tragedy, his fate is this binding to that which does not, cannot, ever love him, a binding that will ask all and will kill. Kafka had a difficult and emotionally violent and abusive relationship with a father who was domineering and controlling and yet, did not care for his son. Kafka was, therefore, forever attached to that which did not love him. It’s the same here. Josef K starts to get attached to ‘it’ (his court case, the people, the world) but the ‘it’ is not attached back. But there is nothing Josef K can do, like Kafka, bound both to his father and Felice Bauer,  he also is bound and is carried away by it. It’s a different ending from Kafka’s splintered novel, but it mirrors more Kafka’s internal fate.