Review of: The Pyramid Texts

The atmosphere is rather like an anticlimax after  winning a bout. There’s a sort of emptiness, as though he has lost something, in the way Christopher Fairbank walks on the stage as boxing champ Ray in Geoff Thompson’s 60 minute monologue- although he owns the stage with a quietness. But there’s something else too. It’s fear. It’s there in the way he bandages up his hands and forearms, as if preparing to limber up. It’s even there in the calm, almost ritualistic way he takes the old weathered boxing gloves out of his bag and holds them like a baby: the prayer beads, the way he runs them sadly through his fingers as if they are the precious Pyramid Texts themselves. 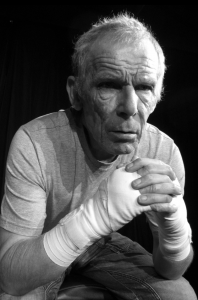 Much of Ray’s journey, of which he speaks to a small camera positioned in front of him and from which he eyes never stray, is thematically linked to The Pyramid Texts and their ancient Egyptian spells to help travel, fly, animate and protect. Potently, this language is used by Thompson as a continual metaphor to describe Ray’s own relationship with his son, to whom his sad monologue is addressed. Fear is at the heart of everything. Not fear of violence to the physical body we understand: the play shows us how easy it is to ‘wrap’ up the body, glove it and protect it. No, it’s fear of something else: of the soul, identity, existence, these intangible things that no corkscrew punch can touch. We realise it is so easy to win a fight and keep on winning, but that it is so much harder to actually live.  There’s a sense that the silhouette of the punch bag hung above Ray’s head is the continual chip on his shoulder in Michael Vale’s production.

At times, Fairbank pauses, as if accentuating breaks between actual rounds, as though that is what his monologue has turned out to be for him- a fight for survival. Gradually we start to understand. Why is Ray talking into a camera and recording it as a keepsake? Why are his most treasured possessions gathered around him? We are not given an answer.

Geoff Thompson’s writing is pared back and to the point. It has an aching sadness to it. Christopher Fairbank slowly works himself up to a cacophonous climax that is Ray’s helplessness and frustration. It’s workman like. But this could be the point. The whole thing is a continual limbering up to its sad climax.