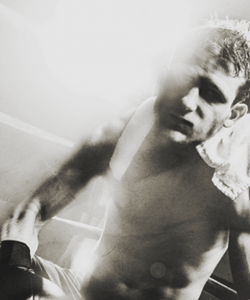 Tennessee Williams wrote his short story One Arm in 1944 shortly before writing The Glass Menagerie. Describing the writing of it as a torment to friends, it never made it as a film as Williams wished, despite many screen play drafts. But it has made it to stage, adapted by playwright and director Moisés Kaufman, and it is set to make its UK premiere at Southwark Playhouse this month, directed by Josh Seymour. Here we catch up with actor Tom Varey, well known as Bert in the BBC’s The Village, as he prepares to play the lead role.

Tennessee Williams is such a big draw for actors?

I played Tom in The Glass Menagerie way back when I was 18 for a local amateur society and found his work very interesting, each character is so strong and full, and the combination of that with his poetic, lyrical language, makes for a great play.  Ollie is a great part to play because deep down he is an ordinary boy who finds himself caught up in a whirlwind of extraordinary events.

At the beginning of the play we find Ollie on death row, what follows is the story of how he got there as we fly through Ollie’s memories – from becoming a light heavy-weight champion, to working in a call house for boys in New York.

You played Bert, another young man coming of age in the BBC’s series The Village….

Bert and Ollie both have a limited knowledge of girls, and a passion or talent for boxing.  I think both characters are proud people who don’t like their emotions to get the better of them.

Ollie definitely fits into that bracket, the tragic thing is that throughout this story you get a feeling of the times where things could have worked out so differently for him, he is a passenger for most of the play and these things just ‘happen’ around him. He always wants to do the right thing but looks condemned from day one.

One Arm was written in 1944  about a man who was a male hustler. Can it still have relevance today?

The play is more about people trapped in their own circumstances, I think everyone can relate to a sense of loneliness and longing for something.

Is Ollie close to Tennessee Williams himself do you think?

There may be aspects on Tennessee Williams’ character in Ollie, but I think the overall themes of the play tell us a lot about his life.  Every one of the characters seems repressed and in search of something or someone.

Ollie only has one arm….

I have been asking John Ross (Movement Director) about the physicality and ways in which the missing arm can be used in a different way – perhaps to convey Ollie’s mood, rather than just not moving it for the whole play.

How else are you preparing?

I’ve been having some boxing training and fitness training out side of rehearsals and have been watching a lot of boxing videos.  I have also been researching US in the 1940s to get an idea of what it was like to live in that time.

The people who will come and see One Arm are…

… the people who enjoy Tennessee Williams’ work and people who want to be taken on a complex story through time and the memories of Ollie’s life.

Working with the cast and  director Josh Seymour has been like…

…a heck of a lot of fun! Josh is a very intelligent and thoughtful director and the cast are all versatile and fun to work and explore the text with.

What’s next for you?

A big holiday! And then, I’ll just see what comes along!