Review of: One Arm

Firstly let me preface this by saying that I am ill. Really ill. The kind of hot and cold, shivery, feverish terror of a flu that begs that you turn off your phone, lie still in a dark room, feel sorry for yourself and live on a diet of Lemsip and Netflix. But instead of whimpering into the darkness I am sat waiting for the opening moments of One Arm at The Southwark Playhouse, cursing my aching bones and trying not to sneeze on my fellow audience members. The one thing running through my head; This. Better. Be. Good. 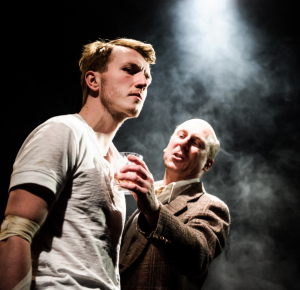 And the first thing to say is, it is. Moisés Kaufman’s adaptation of the Tennessee Williams short story and screen play interrupts the linear story of Ollie Olsen’s life and death, reordering the work in a clever and fast paced manner that unfolds the plot tantalisingly in front of you. Taking inspiration from the screen play, the whole piece is filmic; smoke screens, slow motion, snappy scene changes and a beautiful sound track, the production is the perfect collision of film and theatre.

Josh Seymour’s direction is beautiful and multifaceted. Each actor bar the enigmatic Ollie Olsen, played by Tom Varey, plays many roles and is involved in various beautifully choreographed and well executed movement sections, as well as being involved in scene changes that pull us through Ollie’s life during his wrestling career, tragic accident, life in Chicago and his time in prison.

The cast are brilliant. Well matched and slip seamlessly from part to part, they portray the era well, leaving you adoring these men forcibly closeted by the time and society, men dreaming of affection with the handsome mutilated stranger. Tom Varey is heart breaking as Ollie, torn apart by the direction his life has taken, the world he finds himself in, and the sentence that faces him. The portrayal of his missing arm is cleverly and simply done and Varey’s physicality is beautifully executed and painful to watch, after a while you see his arm as almost completely gone, as he hangs it, unmoving, invisible by his side. It is clear throughout how much the potential of the life he could have had haunts him terribly.

This is a lovely adaptation brimming with talent, gripping in its pacey 75 minutes and brought to life by the wonderful and vibrant cast of Peter Hannah, Joe Jameson, James Tucker, Tom Varey and Georgia Kerr, playing each of their roles with sensitivity and humour.

The play closes with Tennessee Williams’ beautiful and poetic words, “But death has never been much in the way of completion”, language that haunts you long after the play has ended, much as Ollie’s tragedy haunts him. And a good play should haunt you after, make you rethink and reconsider and mull it over. One Arm does just that, engaging and enthralling it really is worth battling the worst of flus for.

Lover and maker of theatre.Founder of Whistlestop Theatre Company, director and creator of things.