Review of: Now This Is Not The End

Set in Berlin and London, this is a play as much about migrating energies as it is about the Jewish people. It might be a homage to My Mother Said I Never Should, also about generations of mothers, daughters and granddaughters, haunting memories and quietly kept, even unpalatable  secrets. Unlike Charlotte Keatley’s GCSE set text, which takes place in Manchester and London, Rose Lewenstein’s new play, deftly directed by Katie Lewis, crosses the channel and back again charting the legacy of the traumas of WW2, how the heimat (untranslatable to a certain extent, but meaning a person’s non spatial connection to a place) draws Rosie, a British university student played with the right degree of complacency and seriousness by Jasmine Blackborow, to study in Berlin and fall in love, returning to the city where her half Jewish Grandmother Eva lost her parents to the SS. We jump in time as we meet Rosie’s mother and Eva’s daughter, Susan, living in England and struggling to understand her own relationship with Germany. Eventually Susan tracks down a tape recording adult Eva made of her childhood experiences in Berlin, providing some unexpected and not usually documented revelations and proving cataclysmic for some of the other relationships in the play, the relationships with men. 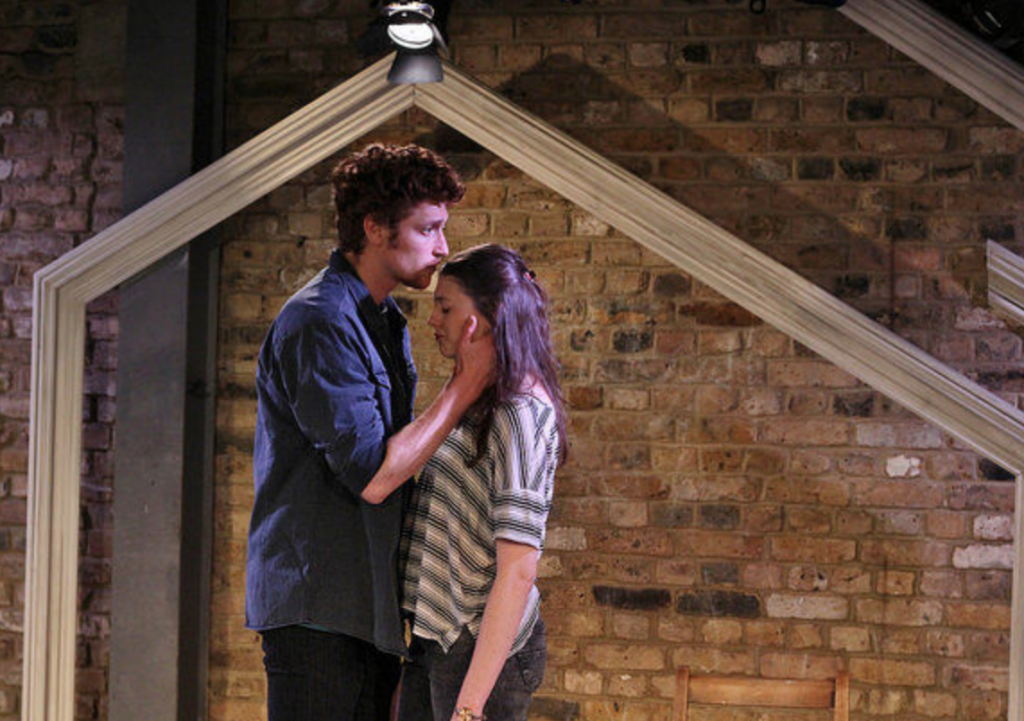 It’s hard not to think that the play’s title takes itself from Churchill’s 1942 speech at London’s Mansion House just after the British defeated Rommel’s forces in Alamein. In fact the play invites us to look at wars and migration in a timely new light and asks us to consider that the effects on relationships, memories, pain, love and procreation, continue long after any war has ended. Things  that are not always translatable into words.

This play goes against the usual route of Jewish victimhood- it is even a celebration of the strengthening of ties across borders- Dan Jeffries’ score reminds us of this. Holly Piggott’s Chuppah like structure hung on the Arcola’s back wall is a continual reminder of  a ‘home’ which the couples: Rosie and her German boyfriend Sebastian, played sympathetically by Daniel Donskoy, Susan and Andrew Whipp’s slightly powerless Paul and even Eva and intense Arnold, eventually come together under. At times the structures light up with Prema Mehta’s neon like empty photograph frames, a symbol for Eva’s missing tape, her emptiness which we would now recognise as PTSD and in time, her dementia. Alternatively, like the contradictory emotions the play throws up, the frameworks are also the outlines of the crematoriums in the concentration camps.

Who has the right to own which memory, its interpretation and decide its authenticity? Susan, whose franticness Wendy Nottingham turns up by volumes as her need becomes more desperate, wants that tape, but for Bernard Lloyd’s Arnold, who is also frantic, the consequences are traumatic, even if based on what could be seen as a throw away comment (here an example of what a character says contradicting how she acts). Love misses a generation, Eva whom Brigit Forsyth imbibes with a horrifying vacuity which negates responsibility, finds more in common with Rosie and can love her, through degrees of separation, much more than she can her own daughter. All women explore the themes of thoughts and feelings being ingested, even a country, through Kaffee und Kuchen and German biscuits and a broken bottle of clothes soaking Schnapps. This ingestion Susan cannot bear, as if Rosie and Eva reaffirm their relationship with Germany by literally eating and drinking it. But the feeling of displacement, seen most in Susan, takes three generations of women to work through, all three copies each others mistakes like a variation on a theme until they eventually get it right through Rosie.

In a play where the structure is built around the frameworks of matriarchy, the men are pushed to one side slightly: but they are mirrors to the strong bonds the women form and the cruelty they impose on them and one another, almost as if bearing witness.

Rosie Lewenstein’s writing allows for the opposite of what is suggested in the text to happen on stage. Occasionally it feels that moments are reached with some beats missing, which hints that the play could probably be longer. But an audience will find itself pulled irresistibly into the vortex of the relationships the women have with each other.

A quiet but deeply complex play, Now This Is Not The End not only illustrates intergenerational mistakes and inherited traumas, it attempts to solve them with some form of redemption, even if that redemption can only be experienced by proxy: i.e by the experiences of someone else.

An eloquent, but harrowing alternative account of the Jewish experience during the Nazi Genocide.