brutal and cruel, yet leaning towards the magic and sentiment of a Tennessee Williams’ play

A modern romance may be, but this play is drawing on some pretty fine classics for its inspiration: not only does the 70 minute piece make passing references to A Streetcar Named Desire, it also pans out like a memory play, with melancholy song and sometimes direct address at the audience to enhance the dreamlike affect. 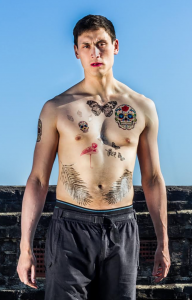 The story, though, is far from classical: Tom Powell’s rather saint like dreamy Adam falls in love with butch but insecure Isaac (Nathaniel Fairnington) when he sees him play Stanley in Tennessee William’s great work. Stanley is the atypical heterosexual male (who is it Adam falls in love with?) and Isaac is everything but, although, throughout the course of the play, as he realises he is losing Adam to the mother and child he helped create through sperm donation, he seems to take on all of Stanley’s neuroses and some of his character traits in a bid to become God, Adam’s God.

Though the thru line of the plot is Isaac’s jealousy at what he sees as Adam’s betrayal and Adam’s need to prove himself, it isn’t really all about test tube babies and how children should be produced at all- it’s a conversation and at times, violent argument, about what it means to be gay and what love actually is.

Interesting narrative juxtapositions and fractures in time, give this piece a dreamy erotic sense: its style is comparable with Tennessee William’s One Arm. But it also has a longing in the writing that’s redolent of Arne Lygre or, in particular, Jon Fosse’s I am the Wind.  Tom Powell as Adam has an undefined strangeness and a presence that contrasts and conflicts well with Nathaniel Fairnington’s macho brutality as Isaac. Singer Paris Richards acts almost like a Greek Chorus- perhaps she is the mother of Adam’s child, we don’t know. She is haunting with her melancholic “It’s only a Paper Moon.” Although some scenes drop in energy and sometimes we feel we are given too much, Eve Carson gently and patiently teases out the conflicts between the two men.

At times brutal and cruel, yet leaning towards the magic and sentiment of a Tennessee Williams’ play.