Review of: d(ARE)/ Here be Lions

maddening and compulsive at the same time

d(ARE)/ Here be Lions, two pieces by The Print Room in association with Theatre of Europe, on the experiences of children with severe and multiple neurological difficulties at the Hopital de la Roche-Guyon, are inextricably linked. 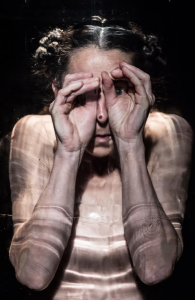 d(ARE) seems to focus on our obsession with spectacle and taking inspiration from the 17th Century invention of rotational therapy, which involved suspending patients on swings for hours on end, in a bid to cure them of their supposed ills.

Here, Sandrine Buring’s version is a more modern variation on that theme. An oversized specimen jar hangs and swings from the ceiling, which Buring enters, naked to the waist. Suspended in it for 25 minutes,  her body and its movements tell little stories in Luc Jenny’s light. Sometimes it seems like she is in formaldehyde, or she is a foetus, or echoes the artwork of Bill Viola, Bosch or Sarah Lucas. But Sandrine Buring, time and time again, crawls like a snail up the jar to the top, only to fall back down again: and an audience’s attention is rapt. And therein lies the point. It is as if Sandrine Buring is part of a human zoo. It is possible to stop thinking about her as a human being, and instead analyse her in terms of light and bone and flesh. It is painful. The question is asked, how can a person communicate with someone who cannot communicate in the ordinary way? How can making them into an object, then be avoided?

Here Be Lions or Hic sunt leones, provides some answers, although it certainly does not give the audience any sign posts as to how to read it: we are in uncharted territories.

In a sensory room filled with fog where the audience sits in deck chairs, so being encouraged to experience a form of synesthesia, Hayley Carmichael’s voice, somewhere in all the mist, describes a children’s hospital, the patients, carers and the artists Sandrine Buring and writer/director, Stéphane Olry themselves, taking inspiration from their residency at the Hopital de la Roche-Guyon. Almost contrapuntally, vocalist Phil Minton describes the feelings the children cannot perhaps put into words. The effect is disjointed, stultifying, yet the narrative, translated from the French by Neil Bartlett, also pushes towards joy. The assumption that there is only one way to experience the world by those without neurological differences, is demystified and shown as arrogant. Touch becomes the most important way to communicate. What we get does not allow us to make narrative sense, rather like the disjointedness in 4.48 Psychosis, Craved or Cleansed. The ontological fracturing is horrifying. Numbing. But it encourages audiences to focus on the present and to quieten their inner internal dialogues.

The two pieces may on the surface seem to suffer from a lack of cohesion. But context is everything. And there’s a sort of religious wonder of it all, a playing on our need for objectifying spectacle on the one hand (as a defence mechanism against something we do not understand), the horror at not being able to communicate on the other (once we see through the spectacle) and joy in the embrace of finding new ways to experience, interact and make sense.  Somehow the experience of watching d(ARE)/ Here be Lions is both maddening and compulsive at the same time. Hayley Carmichael and Phil Minton’s vocals are alternatively muted and then abrasive with frustration and tremulous with feeling. The sense is that these two pieces will never be self contained works of art, but constantly changing and mutating. If anything, I wanted more and not less.