Review of: A Single Act

For such a new company, Duelling Productions, with such young performers and crew, Jane Bodie’s A Single Act is a daring choice.  It is a ninety minute tour de force, requiring a complete lack of inhibition on the part of the actors and relentless pacing and focus on the part of the entire team.  Consequently, the company’s youth makes the impeccable production even more impressive; everything from the design to the performances is nearly flawless in its visceral truth. 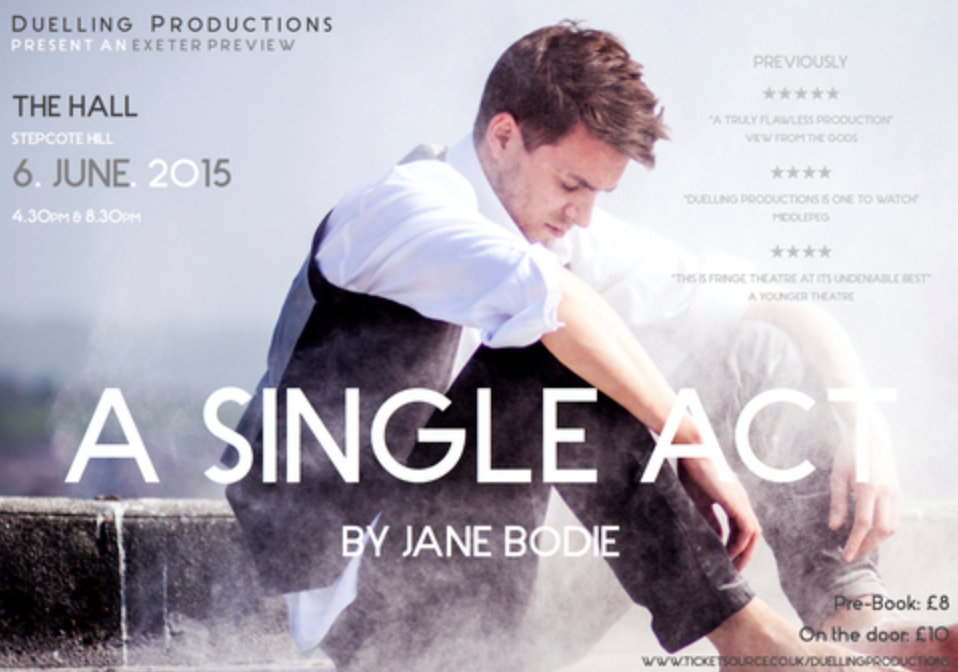 The one-act play follows four people: two couples, in the aftermath of an unspecified terrorist attack.  Scenes are presented in chronological order from the point of the attack onwards with Neil and Clea, yet they trace back in reverse chronological order to the point of the attack with Michelle and Scott.  While the individuals and their situations are different, one thing is certain: both lives sink into despair and alienation in the wake of an anonymous tragedy, despite the fact that it does not directly hurt any of them.  The complex structure – as well as the subtle link between the two couples – is nonetheless illustrated by small but significant tie-ins from scene to scene.  In Duelling Productions’ vision, these scenes are further linked by short, poignant physical theatre sequences showing what words can not convey.

The staging is in the round, and everything – floor, furniture, and actors – is covered with a fine white dust reminiscent of plaster debris.  The seating seems to let the audience into the most intimate of moments, and the dust lends a sombre, washed-out, almost post-apocalyptic aesthetic – well fitting the shattered buildings, relationships, and dreams.  The cast is perhaps the most impressive element of the show.  Without exception, they portray the complexity and maturity of relationships well beyond their years.  Neil, played by Philipe Edwards, attempts normality in the aftermath but only heightens his existential crisis by doing so.  Katherine Stevens’s Clea moves from numb disbelief to an almost-desperate plea for life.  Lucy Hirst heartbreakingly captures Michelle’s fragility and deterioration.  Lastly, Tom Myles makes Scott’s abusive and tender sides equally believable – no easy task.

Duelling Production’s A Single Act is another incredibly strong offering from a promising new company – going from strength to strength in their formative years (following The Norman Conquest in 2014) is no easy feat.  This is not a show to miss during its London run.