Review of: My Children! My Africa!

burns a hole in your heart and your head

Cage up hope on Nancy Surman’s stage for My Children! My Africa! at Tristan Bates Theatre and see what happens.

Athol Fugard’s play set in the later years of apartheid asks, perhaps now the most fundamental question of the 21st Century, what is the best means to overcome oppression? And what is love? Friendship? Betrayal? Forgiveness?  The play has not been revived in London for 25 years but it’s happening now at Tristan Bates Theatre and everyone should go and see it. 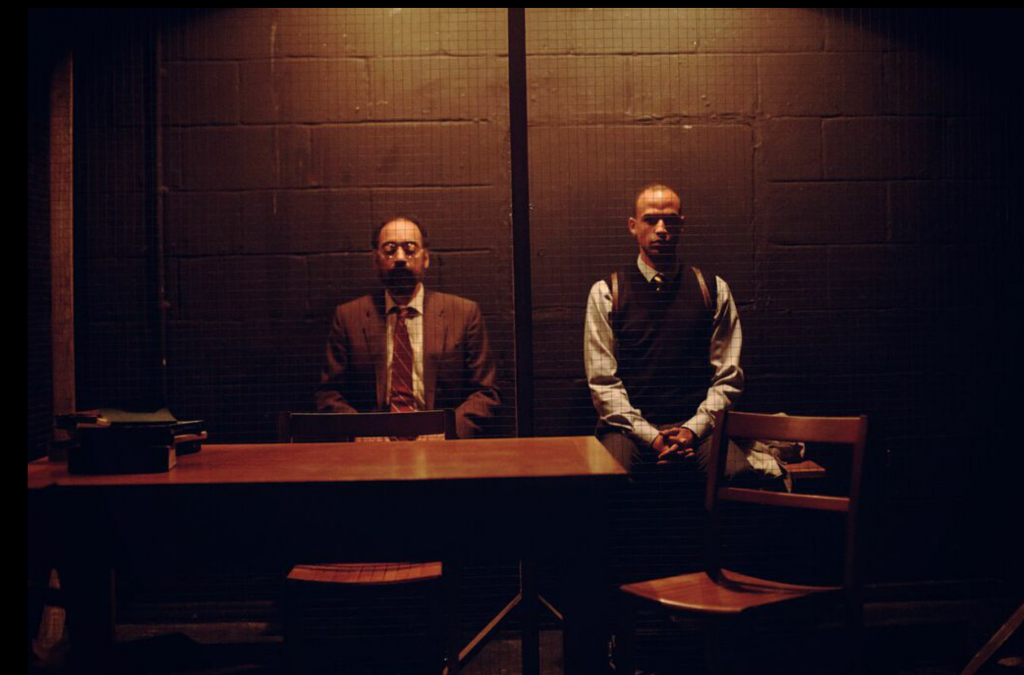 Why? Apartheid ended in 1994 and though South Africa is still racked with poverty, inequality, corruption and xenophobia, it is trying to turn its back on a dark painful past and racial segregation that was a part of its legislative fabric since 1948. But, as given voice by Mr M, the kindly Bantu teacher who acts as an idealistic pivot between would be friends high achieving black student Thami and middle class white girl Isabel, it is a reader on how us human beings are more– more than we ever realised, more capable of things than we thought we or each other can be- that we can dare to have hope but yet, how destructive that hope can be, as much as the forces that bring it into being.

Set circa 1985, much of its dramatic structure is made up of scenes where Thami and Isabel, representing their very different schools and experiences, engage in debate: the opening contest sets up hope for South Africa’s modernising as a whole when it puts gender equality at its core. As Thami and Isabel draw intellectually close, Mr M has a chance to put into practise his core ideology- education first, liberation (from apartheid) second. But Athol Fugard fully explores his belief that out of desperate times comes desperate but perhaps emancipating acts (even as designer Nancy Surman’s stage separates the audience with a wall of barbed wire and encourages us to see the characters as actors and that no one is emancipated here, either physically or finally, ideologically- they are, perhaps, only emancipated from themselves into something new). Mr M cannot see that he becomes representative of a regime that must be overthrown (his own and the ruling government). He (Anthony Ofoegbu) as the teacher prances the stage like a caged lion for whom freedom- from the restraints of a humiliating Bantu education system (designed to prevent its black township students from doing anything but the most  menial of jobs) in the form of star pupil Thami, whom he wishes to send to university- comes too late. Thami’s ‘moveness’ away from his mentor and reason and towards the emotional rebelling youthful comrades against apartheid (Nathan Ives-Moiba develops from a gangly boy out growing his school uniform to a hooded street wise youth) Mr M’s betrayal to the authorities out of an inverted spite against himself and others (tragic in its childishness) and Isabel’s inability to understand what it is like to ‘live in a black skin’ destroys- or nearly destroys their friendships. It also sets up the polemic- do we overcome oppression with forces motivated by passion- i.e violence- or do we take the longer path, the one called reason?

But friendship and how it can be destroyed by colder barbaric anti human forces is also at the play’s heart here. Athol Fugard is really writing domestic dramas as well. Mr M is a follower of Confucius and the three characters illustrate how one may learn from wisdom according to that man: ‘first by reflection, which is the noblest; by imitation, which is the easiest; and third by experience, which is the bitterest.’ Mr M might well be no.1, Isabel no.2 and Thami no.3. As much as we might be asked by directors Roger Mortimer and Deborah Edgington and the designer to reflect upon ourselves (to feel also what segregation does to us as the audience) and as much as Athol Fugard can be seen as a polemical writer (Los Angeles Times writes ‘flawed Fugard can still be powerful Fugard’) I wonder if we worry much about its perhaps simple story dynamics, messages and roles the characters imbue. We are asked to see the present political degrading system from all points of view and the passion all three actors exhibit- the faith in the text, the belief in their characters and the ardency with which they perform, leaves one at a loss for words.

What’s at stake? It is a picture of how an oppressive society divides humans and tries to destroy and can destroy love. Thami rejects Mr M and all that he has taught him and it breaks that man’s heart. Isabel’s love for Mr M is not allowed- Rose Reynold’s Isabel is innocent, frustrated and, in her attempted hugs of Mr M, seemingly struggling against that regime which supports her but not him.

Athol Fugard believes in genuine confessions, genuine forgiveness. Confessions come all too quickly from these three, so do judgements- Isabel’s notion of Mr M is challenged and found wanting. So too her idealistic vision of Thami- a sort of western romanticism of him (the influence of the West which he so fears at the beginning of the play) and the conditions under which he lives.

Thami wants action to lift the oppression. Mr M wants more peaceful means. Isabel is more provincial, outside the struggle until she is forced to understand South Africa with new eyes.

My Children! My Africa! is one man’s lament for his country’s children (perhaps also Fugard’s). It looks at how society affects our closest relationships, and, more importantly, the potential of those still to be formed. It reframes idealism (if you think Mr M is idealistic) through a realistic lens- and we see, painfully, that Mr M’s notion of achieving peace and equality through the steady, prolonged, lengthy sustenance of education (words are magic: Mr M holds up a dictionary and a rock and says that they both weigh about the same but the dictionary is words and power and the rock is just a rock) is not enough for those who confront the realities of violence as brilliant young men and women who are robbed of their future. The young no longer want to suffer in the same way for the generations to come and Thami must leave the classroom-  all Mr M can do is ring the school bell in defiance.  The theme of hope- for Mr M as destructive as hate or despair- is a double edged sword in African literature- it can alienate and frustrate as well as give one a reason to live. Hope mustn’t be let out of the cage- the cage we have on stage- must it? Fugard seems to be saying- or must it? This is what leads to desperate acts that can emancipate- or not.

In the end, do words speak louder than actions? Is it best to let hope out of the cage and move like a raging animal?  It was a question for South Africa then and it seems to me, a question that seems just as relevant now and for us all.

But don’t forget that Athol Fugard also keeps hold of the idea of love, friendship and reasoned hope at the play’s core. Isabel can at last be close to Mr M though not in the way she imagined. And herself and Thami can still carry the hopes of South Africa on their shoulders and push that country forward, though again, perhaps not in the way they had imagined. And with, tragically, clearer vision.

Deserving to be packed to the doors with critics and audiences alike, this production burns a hole in your heart and your head, but carries you out into the night with careful hope and love. Two Sheds Theatre production of My Children! My Africa! is at Tristan Bates Theatre until 16th May.

Athol Fugard on aging and apartheid

Athol Fugard on the art of theatre

Roger Mortimer on directing My Children! My Africa!