NOW ’15 features work in progress: the following are notes and/or ideas and not reviews. 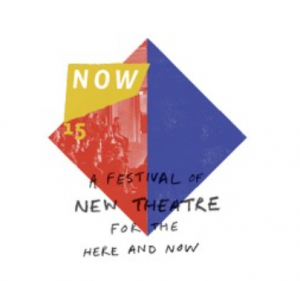 Nicola Weston’s Located in Transit is surprisingly innovative for the very fact that it isn’t innovative at all. The performer sits on a ladder and narrates moving stories from her childhood and in between paints the shadows of a female mannequin with a police hooter for a head. At the end she throws feathers over this authorial ‘masculinised’ thing and walks off stage. I’m not sure what we are meant to think but there are some touching stories in between,  linked by the presence and voice of the narrator. Nicola Weston herself is a coy performer, slightly tongue in cheek, pretending she is less intelligent than she is. The writing is surprised at itself, Weston acts as if she is taken aback by her own revelations (particularly about mental health). There’s an earthiness, good humour, intelligence and basic decency here verging on stand up comedy that’s like a gentler more poetical Miranda Hart crossed with Alan Bennett’s Talking Heads.

Ponyboy Curtis (Chris Goode) is something else.. a gang of boys, taking their name from the iconic character in the Outsiders film, starting with their premise that ‘ they are sick of everything and want to start again’ (I paraphrase) move around the stage which is mapped out for them by rows of their clothes, which at different times they put on and take off. All 6 spend a lot of time naked, running and dancing to crazy house music mimicking scenes from projected American films on the Yard’s back wall ( one an iconic film I cannot name I’m afraid, another, Rebel without a Cause). They go round and round as if stuck in a terrible loop.   The end credits, after an hour of running, kissing and fondling each other’s body parts  mentions Brecht as a source and how, as a reaction against capitalism, we should or could be more promiscuous with ourselves.

I couldn’t help thinking a lot about Derek Jarman & Will You Dance With Me? and Blue, especially when the projections became squares of colour sliding into each other. But with Jarman we are always viewing what he wants to talk about through the viewfinder of something else- Shakespeare’s sonnets for example, or other artists. Here, although the boys are caught as if in a bad 1980s art video, there is no soft barrier. Or invitation to view what’s being presented in a certain way or have that view skewered. But if theatre’s going to be a social and collective act, I was wondering when we the audience were going to get to join in all this sort of promiscuity. There’s also the question of boundaries.. what’s permitted, what’s not? What are the performers inviting of me? How do they want me to react when they stare at me completely starkers? It felt like a reaction was needed, against all the rush, all the testosterone, all these relationships happening onstage between the men, but not with the audience. Where and how could that fit in? There’s a large amount of uncertainty, a large amount of non narrative. The men put themselves- physically at least, and therefore perhaps a little psychologically- in vulnerable positions. But where is the vulnerability coming from and what kind is it? There’s charm and sadness in their bodies, there’s sensitivity when the boys collapse like dying swans. They handle each other delicately, like touching ivory.  There is no context we can put to their ever increasing complex relationships and pairings off with each other. We also just watch- made into voyeurs because there is nothing else we can engage with. The boys are brave as well as nervous. Trusting as well as courageous. For what though? I kept asking myself.  When characters speak, the lines are thrown away, we cannot hear them, we are not allowed to.

Theatrical notions may be being challenged, in terms of its development, it remains to be seen where it will lead this piece.