Review of: Beyond Caring

‘There is much pain’

It’s hard, as stone cold as its floors. The hardness is not the cleaning work though, the real hardness- is the oblique indifference of the culture that surrounds such menial work where attitudes are an updated version of those in Zola’s Germinal- an updated version that should seem familiar from the culture of the last few years and will be apparent, perhaps much more, for the next five. 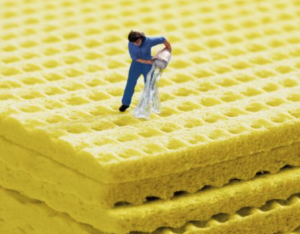 The work- cleaning a meat factory- in Alexander Zeldin and the cast’s devised piece- should be straight forward though. The politics of the place is not. It’s the disease of our subcontracted work cultures that people surrender themselves to in a bureaucratic haze just to stop themselves from thinking further.  In such places the walls will be covered in endless charts, venn diagrams, lists, goals, outcomes, team member of the month etc, all to heighten a false sense of importance and chain people in this illusion. This falsity allows for rights to be slowly eroded.  For example, Ian doesn’t care when or if his agency cleaners get paid. It is not his problem, nor should he make it his. He can’t even be emphatic. It’s an irony that such work can dampen the ego or blow it into outrageous proportions, as it does with supervisor Ian. Hence his need to carry a clip board, swank around and dispense with social niceties. It’s the politics of agencies versus contracted workers, zero hours versus rights, the desire to earn more money versus self care. Jumped up supervisors who pass idle bureaucratic pressures onto their work force with arrogant sneery relish. Or the rush to get hours- and, even if you can’t afford it, you’d better have that latest smartphone– they are the virtual frontiers of the war where the battle to get work like this is fought.

Hedy Weiss once said that you can’t separate a show’s content from its production, you can’t be asked as a critic therefore, not to respond politically to a piece of work. Beyond Caring is a good example of this. It’s political content (following 4 cleaners and their supervisor)- the restrictions enacted by the agencies and Ian’s boss, the DWP who have renegaded on Grace’s benefits- has a direct effect on how they- Susan, Grace, Becky, Phil and even supervisor Ian, move onstage. It affects how they dress. For the initial interview Grace is massively over costumed. Such is her desperation. Full timer stalwart Phil is baggy, weighed down, apathetic. Ian’s attitude is of someone who expects to be usurped at anytime and therefore his aggression premeditates anticipated challenge and immobilises all opposition. The three newbies, Grace, who has rheumatoid arthritis, Susan who is so short of food she steals Grace’s biscuits, and Becky, alienated from her young daughter, don’t know what they are letting themselves in for. It’s not that they don’t want to work. It’s not the work that’s degrading. It is how they are treated that is.

But nothing much happens in the play- we just see them clean and get to know each other- and this is its triumph and its slight downfall. Talk about content affecting style. The atmosphere is so submissive, depressing and bland that this transfers itself like a disease to the workers. They are robots to be used with only one end in sight, and that end cares neither for mind nor soul. Therefore nothing much is said onstage unless it is to talk about the work. All are pervaded with a sense of despair and with little hope of reward. We see them clean again and again. Sometimes, in the short breaks they all choose to take in order to earn more money, we see more of them. The book Phil reads, the music Susan listens to, Becky seconding herself away alone somewhere. Grace’s animated interest in others. In these moments, humanity threatens to break out like the sun from behind a huge storm cloud. We see they are not quite broken. But  it only threatens.

In part, this is the show’s downfall too. It is enough just to show us the intricacies of social injustice, the erosion of rights in the workplace and demonisation for at least 15 minutes. But what we want is a way out. For a time, one hopes, thinks, that that way out might come through Phil and Becky- their physical alliance, the fumbled fucking by a rubbish trolley- could become something stronger in its desperation for human comfort and contact. But, instead of realising and cherishing the need and allowing it to change and help them, they throw it away, ashamed. They carry on as if it hasn’t happened. Thus instead of it becoming a protest fuck, it becomes a degrading one. Phil’s care over Grace too, allays some of the evil with its warmth. But neither character has the skill- or perhaps has lost it- to move it forward.

I first saw this play just short of year ago when it opened at the Yard. It felt raw then- perhaps because it is a site specific piece and needed the rough industrial feel that makes the Yard so edgy. It’s different from other theatres because its ghosts are not made up of thousands of actors and productions and audiences but of sweaty workers in mostly menial jobs. I believed the show then. It felt like, and the characters did too, that it came from the Yard itself and was somehow indelibly tied up in its history. Therefore I could accept its death eaters atmosphere more readily, I believed in the story’s inevitability and felt all the anger and frustration that comes with the disempowerment such corporate dictatorships bring.

Here, at the NT, in the former Shed, that feeling is lost. I am always aware that just outside the door, is a wine bar and plush, albeit welcoming, surroundings. The play’s naturalism seems out of place with the NT’s capacity for theatrical illusion. I couldn’t help thinking the show would have been better in Theatre Delicatessen’s The Black Box, although the audience capacity would have been much less.

However, in times like these, the fact that such a show is on at the NT should be applauded. For how much longer such new shows can be on, is another matter entirely. And for the uninitiated, the show is worth seeing. Because there is potential for it to get much much worse (read about TTIP and especially its relationship to corporate companies). Performances are as seamless and as painful as they were first time around.

‘There is much pain’ said Jon Snow on Have I got News for You and of the general election. That statement applies to this show. It might also be a taste of things to come too, if we don’t watch out.

Venue: National Theatre Until: 23rd May