Review of: As Good a Time As Any 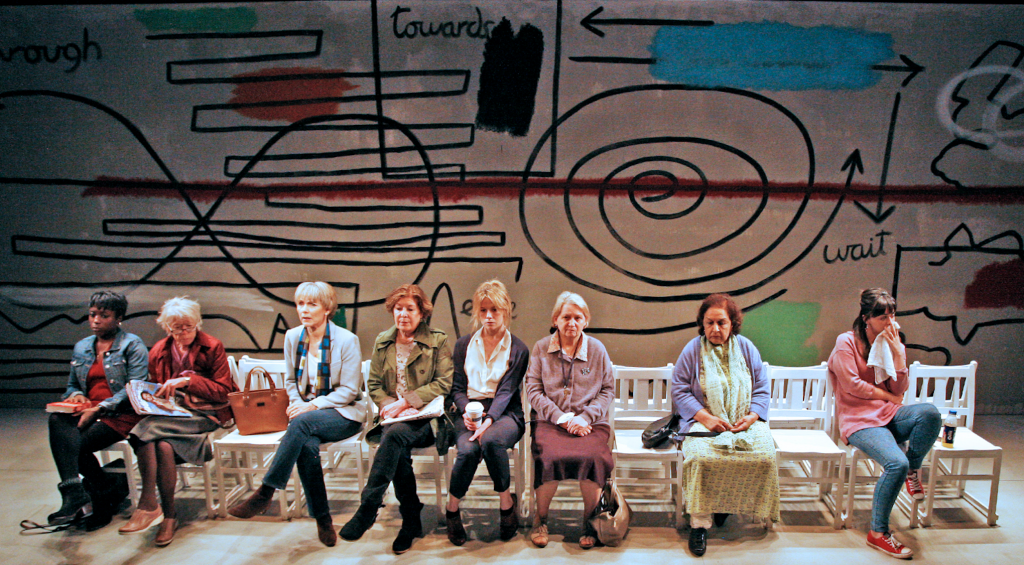 To the background of sculptor and performance artist Bruce McLean’s huge Miro like painting, which accosts us with its rush of movement, figure 8s and Fibonacci like spirals, in itself feeling female, the women enter as if from the paradoi and congregate as if possessed on two rows of chairs. Themselves like ashified  (neologism) statues, they sit rigid, preoccupied, staring and confronting us? or gazing into space, or at the floor until, one by one, they erupt with volcanic like  columns of inner monologues that at first seem separatist and individual. Writer and director Peter Gill takes the Greek Chorus Form and almost inverts it- not only do the women, who are like living portraits of some of Lucian Freud’s best studies, actually gasp collectively, almost replacing the traditional song that would alternate with scenes of dialogue or episodes, now the audience themselves are the observers of these women (are we the hypokrites?) now we get to see them as sometimes silent isolated protagonists at the centre of their own stories.. gnarled, hunched, spirited, beaten down, uplifted…

But the Greek Chorus like structure is also confounded. Divided into 5 chorusing laments, led seemingly by a leader, a coryphaeus, in this case Sylvia (Lucy Fleming) we assume the characters occupying leading roles in the women’s stories are some other, off stage as it were- yet like the interconnectedness of McLean’s iconic work, the little lines and veins of analogies between the women- an illusion perhaps? – like the tiny cracks in a unit of ice- gradually splinter and reveal themselves. The monologue conventions are broken, individual narratives are overheard by the others who are either irritated or angry and then woman finally confronts woman, daughter confronts mother. The interludes from the main action this Greek Chorus is meant to represent finally converge into the main of the story by its end.

But though the women ‘sing’ of their individual troubles it is also that   “silence, like darkness, can be kind; it, too, is a language” (Hanif Kureishi). There is a lot of silence here- even as the women talk. For each is sunk in her own thoughts, as if excavating and retrieving lost things existing only on the outer extremities of her mind. The difficulty each woman has with language, with conveying feeling not just through narrative but through dissemination, is analysed here-  Shirley (Olivia Llewellyn) struggles to give linguistic sense to the pain of her existence like a character out of Clarice Lispector’s The Hour of the Star, though lacking the authorial objectivity. Lily (Tessa Bell-Briggs) is her opposite, her pain is illustrated through event, through the sinking of her head onto her chest.  And it is perhaps in the gaps between the words where we also find meaning and kindness. When Irish Migrant Bridget’s (Eileen Pollock) monologues peter away from their energetic beginnings, that is where we find sadness or reflection. With Joy (Sharlene Whyte)  and Amy’s (Hayley Squires) punched out expostulations we feel smacked in the face.  Marion (Roberta Taylor) leaves us sad and Gita (Indira Joshi) spiritually uplifted (at least at the end).

Nothing much happens except that we get told stories. So there is nowhere to hide. Not the audience, not the actors.. we go on an imaginative journey with them and are forever linked. Our sense of community with each other  (the audience) and the characters onstage is enhanced. McLean’s set harks back to the rudimentary drawings scratched on the walls of caves in our ancient cultures.  The theatre alternative works in two ways- firstly, the oral story telling allows our imaginations to be effectively enfolded into the theatrical fictional worlds of the characters. Secondly, and because of this, Peter Gill invites us to empathise with and love these characters. Which we do.

George Devine once said a playwright should choose their theatre carefully. Writer/ director Peter Gill has done so- As Good A Time as Any is perfect for the Print Room.

Visonary, a poetic theatre of kindness As Good a Time as Any is at the Print Room until 23rd May