Review of: The Velveteen Rabbit

Sometimes, if you cry real tears, even if it is just one tear, something wonderful can happen. Like it does in The Velveteen Rabbit at the end of the Unicorn’s revival, back in time for Easter and by popular demand. 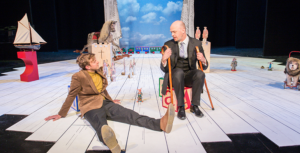 Real is the undeniably significant term here in a show that is all about magic. Magic of play. Magic of theatre. The magic created between friends. And that most transformative of magics- love- that thing that can sometimes happen to us.

Purni Morell’s stage version of this 1922 parable by Margery Williams throws us into the world of The Velveteen Rabbit, hidden in a huge Christmas stocking and suit, set to become the Boy’s next best thing.  Except we see, as he emerges from this gargantuan sock, that he is not a toy rabbit at all, but a man in a brown jacket observed silently by other men- all wearing grey suits and carrying brief cases. For the tiniest of moments we think we are in for some Beckettian gallows humour and indeed there is something of the Theatre of the Absurd about these characters, something puppet like and hopeless… But the adult moment is quickly dispelled by the swishing across of James Button’s curtains, the swooping down of a blue sky and Tarek Merchant dashing to the piano to play out Jason Carr’s mesmerising silent film like score as we watch the Rabbit, whose fame with the Boy lasts for a small amount of time, lie lifeless and forgotten on the Nursery’s hard floor. To soothe his sense of worthlessness, an Elder, the Skin Horse, gives the Rabbit this bit of advice: ‘Real isn’t how you are made. It’s a thing that happens to you’. And subsequently we see just this as Boy and the Rabbit, reunited in childish games, explore what play is, how it wordlessly unfolds between two who are close in a kind of dance, how anything can happen if it can be imagined.

Surrounded by enthralled children I was thinking, this show is about so many other things than just its main preoccupation. We see life from the perspective of a supposedly inanimate object for one thing. We are asked to consider the nature of visibility and invisibility and how one can form one’s identity built solely on the expectations of others. It is about metamorphosis. Perhaps resurrection. About beauty being in the eye of the soul, not the beholder. And of course it is about being real and what the Rabbit can find, and how he can face his dark night of the soul, when he is torn apart from the Boy for the second time.

And it is about crying. And when the Rabbit sheds a tear, something can grow. It is a magical moment. How many times do we see this in adult theatre, where at best, we view someone crying with a sense of shame, as if we are voyeurs intruding on a moment that is seen as painful, private  and even failing? Whereas the beauty of this production teaches us that it is natural, beautiful and healing, paving the way for something new, though a new that is not unrelated to the past.

The play is seamless, it has its own rhythm and regular pulse, like a long visual poem. It combines physical theatre, synchronised movement. There are hardly any words, except from Anthony Weigh’s ever changing rather authorial and slightly absurdist narrator- reminding us of that grey dull world that awaits for lack of imagination, lack of growth, lack of love. Christian Roe’s Rabbit and Ashley Byam’s Boy  are in perfect harmony with each other.

All the way through too, one little boy got it and could not refrain from shouting out that Christian Roe’s Rabbit was actually a man. Thankfully, not the same kind of man we see at the beginning of the show though.

Compelling and crucial, The Velveteen Rabbit continues at the Unicorn until 26th April