Review of: The Seagull

seeks to revolutionise but ends up being a little confusing

This reimagining of Chekhov’s The Seagull flings us into the chaotic dark world of WW1. It’s prevailing theme, on top of Chekov’s multitudinous complex ones, is flashback, in tune with the legacy of lunacy WW1 left us with: shell shock. Some of the cast in this new reworking seem in shell shock themselves though, perhaps as a stylistic device.  Constantine and Dorn both see active service in the interval years between Act Three and Act Four, although there is no sense that Constantine has been shaped by his experiences or that it lingers even in the background of his consciousness, except that he needs to find new ways of writing. Sorin is an ex- member of the foreign office who is just realising that ‘his life’s work has been to start the greatest war the world has ever seen’. It’s a good idea, but it’s not there onstage. And the malaise and terror of the war, which is hinted at at the very edges of this production through sometimes powerful movement sequences, comes at the cost of forcing Chekhov’s thematic concerns- existentialism, generation conflict, the role of the artist in life and in love- into the background to roam in the shadows like unwanted ghosts. Nor is the conflict between militarist and pacifist literature, which is hinted at and could have  provided for some explosive dramatics between Constantine and Trigorin, explored in any great parallel to the role of the artist and his moral responsibilities in some of the reworked and improvised passages… 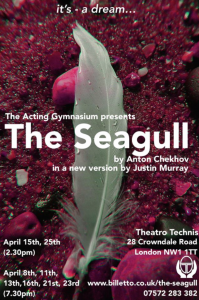 Trigorin, played here at the last moment by the director stepping in for an ill cast member, is meant to be one of the main four protagonists but he seems to be the focus in this uneven production. Nina is like wild Mr Rochester’s wife locked up in the attic and her attraction to Trigorin is not one born out of romantic idealism but a similar propensity to manipulate and control- she knows what she wants and how to get it with a breathtaking cruelty that never ceases. And while the actor’s use of her body reveals that her character has really embodied the spirit of a seagull, the tone is more Hitchcock’s The Birds and less Richard Bach. The interpretation seems much more narrow in focus for it. There is still an undercurrent of youth trying to uproot the old and being constantly repressed- but the conflicts between Constantine and Arkadina are smothered out by games of lotto, to which the characters continually return ( the link between this and their poverty is not really shored up).  Trigorin wins at the end of Act Four- the reason why seems partially obvious but surely we get it enough with the stuffed seagull Shamrayev keeps trying to hand him?

The production is trying to physicalise the play through movement, possibility of shape and integrated acts onstage with as little reliance on the text as possible- a text that is cut up and which the cast gasp and mutter as if suffering psychogenic non-epileptic seizures, reinforced by a continually flashing blue overhead spotlight. The fact we can’t hear what they say does not really help. And the audience are continually bashed around on the head with the movement idea at the expense of  breadth of character, rigour, self examination and story arc. It muffles the actors’ ability to pace and the scripted scenes rock along at a terrific rate, missing the chance for characters to engage with each other.  We don’t care what happens to them. Whilst it is quite extraordinary in its aim and ambition, and there are some well directed scenes where bourgeois indulgence and indifference contrasts sharply with sometimes raw emotion (but not the dogged determination Medvedenko is supposed to bring) it is hard to understand what this interpretation of The Seagull gains from being set in WW1- like Chekhov, it seeks to find a new language and tries to revolutionise what this play could  be-  all it does though is create a little confusion.