Review of: The Lady's Not For Walking Like an Egyptian

“She’s dead and its still not over”. Apparently it was New Labour that Margaret Thatcher considered her greatest legacy; that she had shaped the political landscape of the UK to the extent that even the opposition (mostly) reflected her brand of aggressive neoliberalism. As Mandelson said, “we’re all Thatcherites now”. 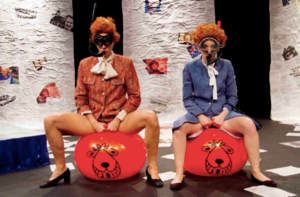 As long as Thatcher’s legacy is felt throughout the country, then work about her remains relevant and important – and particularly urgent in the run up to May 7th. The Lady’s Not For Walking Like An Egyptian is an often hilarious, yet deeply sad show about Thatcher’s 80s. Using physical comedy, a contemporary meta narrative and a characteristically upbeat 80s soundtrack, Mars.tarrab lead the audience through the decade via their own experiences of Thatcher’s government. Its an unabashedly critical piece for, as the performers declare early in the piece, “we can’t do the fun 80s and leave out all the shit”.

Rachel Mars and nat tarrab, who have both written and performed the piece, deliver many of the regular criticisms of Thatcher – her unwavering belief in the moral rightness of the free market, her order to sink the Belgrano and her support of the despicable Section 28 – with both humour and fury. Mars performs a caricature of the Prime Minister standing on a table in nothing but Union Flag underwear, raving about a homosexual agenda promoted by public services and castigating a female audience member for glancing at her thighs – “have you become a homosexual by reading about it in the libraries, Madam?” It’s a hilarious, if troubling take on Thatcher’s beliefs that is carefully juxtaposed with a sobering monologue from tarrab, who talks about growing up as a queer kid under a law that essentially sanctioned homophobia.

Juxtaposition is a key device in the show, with tarrab providing much of the anger and fury, often, presumably, genuine, and Mars alternating between a comically clueless contemporary woman and a fire and brimstone impression of Thatcher. This creates an innate sense of competition between the performers, which is a clever subtextual nod to the neoliberal demand for individualism.

Criticisms emerge too for Thatcher’s resolute anti-feminism (tarrab: “she betrayed her vagina”), and of her reshaping of arts funding – drawing money away from the radical and experimental and towards the profitable and safe (tarrab: “I fucking hate Cats”). The Arts Council supports The Lady’s Not For Walking, so clearly there’s still some money for the kind of work tarrab would prefer, and it’s a slightly under-articulated criticism, as the question of whether the commercial West End is good or bad for theatre is a complex one. Nevertheless, it’s a criticism that has some truth, and it’s easy to see why a Tory government would want to silence experimental left wing protest.

Similarly, the pair draws a link between the shifts from the exciting gender queer music of the late 70s to the bland, if catchy, pop tunes of the late 80s and the presence of this deeply conservative government. Culture shifted to represent the times, times that the pair describes as bland, commercial and rigidly heteronormative. That being said, interesting, amusing parallels are drawn between the lyrics of 80s pop and Thatcher’s speeches – casting the Iron Lady as some kind of pop culture icon.

I really enjoyed The Lady’s Not For Walking Like An Egyptian – its fun and hilarious, furious and unabashedly political. Laughing through the pain of Thatcher is helpful, but the comedy of Mars.tarrab leaves a bitter aftertaste long after you’ve finished laughing. When our choice next month essentially comes down to Thatcher’s economics tinged with blue or shaded red, it is work like this that highlights the need for diversity, discord, difference in our political system. It’s just a shame that work by artists like Mars.tarrab often preaches to the converted. I doubt that there were many apolitical people in the Royal Exchange last night. Perhaps for political theatre to have a greater efficacy, we need to take it to broader audiences. Thatcher’s legacy isn’t over – “She’s dead and its still not over” – so let’s keep making work that puts this message across or else the Iron Lady might have the last laugh yet.

The Lady’s Not For Walking Like An Egyptian is currently on tour playing Norwich Arts Centre on Wednesday 22nd April and The Albany, London, between the 23rd and 24th. More information can be found at www.marstarrab.co.uk.