The Classical Drama Society from University College London transferred their take on Euripides’ The Bacchae from London to Scarborough last week, for the National Student Drama Festival 2015. The NSDF selects twelve of the best examples of student theatre in the country for inclusion in the annual festival and that The Bacchae, which opened in the UCL Bloomsbury Theatre in February, was selected despite being entered at the very end of the selection period, is testament to its quality. 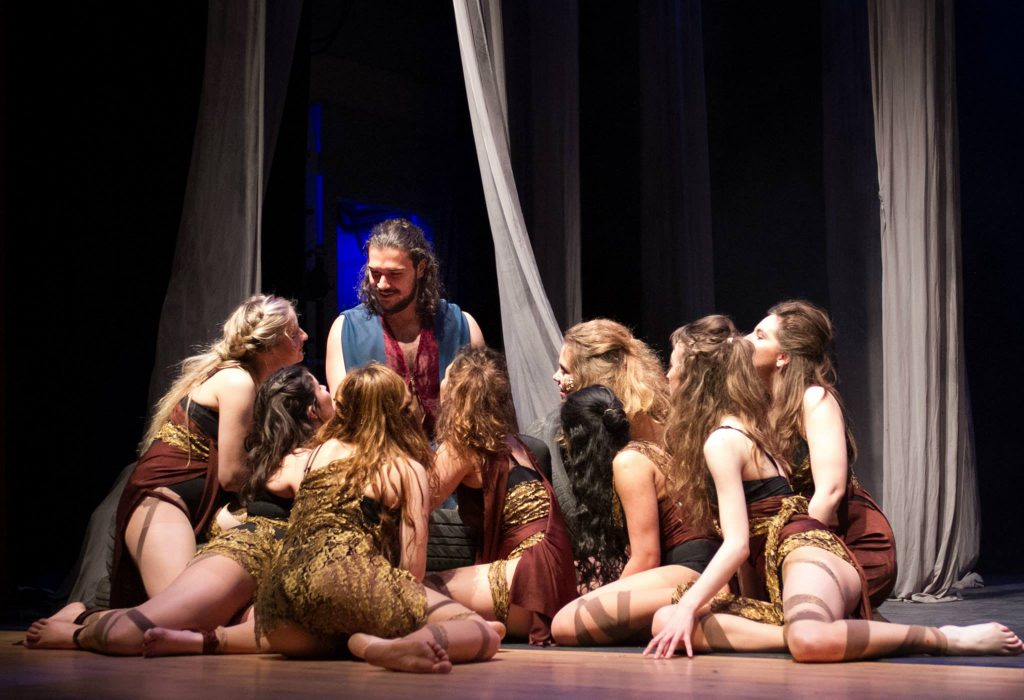 The play is a bloody tale of revenge, as Dionysus, the Greek god of wine and theatre, seeks to destroy the royal house of Cadmus and its king, Pentheus. Pavolos Christodoulou is magnificent as the god, and whilst his stature helps, it’s his ability to flick from tempestuous fury to a sinister, knowing playfulness that gives his capricious Dionysus a fitting sense of immaturity and youthfulness – appropriate for a god whose pride demands that he destroy a family and burn a city.

Euripides’ play is about the dual sides of human nature: the wild, instinctive side, driven by a lust for experience and pleasure, that Dionysus promotes and the rational and civilised side, represented by Pentheus who (perhaps reasonably) doubts Dionysus’ alleged godhood. It’s just a tragedy for Pentheus that in Greek mythology, the gods are real! Adam Woolley gives a great performance as the King, initially unshakeable in his self-belief, and then broken and bowed by the sight of his own mother enchanted by the god’s power.

The centrepiece of any Greek theatre is its use of the chorus – here, the titular Bacchae. Choreographers Valeriya Azorina and Despina Pseftodiakou have created a sense of unity in the group, movement isn’t necessarily timed perfectly, but this adds to the franticness of their action. There are some nods to the sexual element of Dionysus’ conjured frenzy but, too often, it seemed that the Bacchae were trying to look sexy rather than the grotesque carnality that the play demands. Regardless, the chorus deliver the central sequences with finesse and I would have liked to see them used to an even greater extent. Classical plays are often filled with exposition, lengthy monologues describing off-stage action and it would be interesting to see more physicalisation of these scenes.

UCL’s The Bacchae is a fairly straight forward take on the play and it is a very good one. A special mention must be given to David Denyer, the composer, and his band. Music is as crucial to classical theatre as the chorus, and the compositions are sinisterly appropriate for the play. The band too, dressed as Bacchae, emerge from the set, their style of movement taking a cue from the chorus work. Similarly, Avra Alevropoulou’s set design is simply stunning. Trees, or perhaps columns, are created with long white pieces of fabric that hang from the heights of the space, but mountains of tyres and strange creatures of light and wire combat any notion of an overtly classical aesthetic. It’s a great design that evokes both the ruined pastoral tranquillity of the mountain, and the broken urban space below it.

A more traditional take on a classic text than I was expecting to see at a festival that usual places emphasis on new writing and interesting restaging, UCL’s The Bacchae was, nevertheless, an exciting and enjoyable play that ably conveyed Euripides’ message on the duality of human nature and the danger of offending a god.

The Bacchae was selected for inclusion in the National Student Drama Festival 2015 (28th March – 3rd April) held in Scarborough. The Classical Drama Society will be transferring the show next to The Festival of Ancient Messene. More information can be found on the Festival’s website – ancientmessenefestival.blogspot.gr