Disorientating, distorting our ideas of control and vulnerability and theatre

It is all dark in the studio, save for a lone spotlight on an old 30s style radio. The audience sit in a semi circle. The spotlight dims, taking us with it into a greater, wider world of sound and almost complete darkness. There is nothing to see. We hear a low whistle- in the program notes this is described as eerie, but it made me think of the eloquence of Takemitsu’s crystallined and understated tonal poems. A voice, young, male, speaks- ‘Hear’ it says (Or Here). ‘Hear/here that…it’s gone.’ His voice is slowly replaced with a cacophony of others- ‘we made love until the early hours of the morning’ recites a tremulous female, ‘the economic recession!’ another harsh male voice accuses, until they recede and are replaced by other little snippets of scenarios that come at us from all corners of the space. 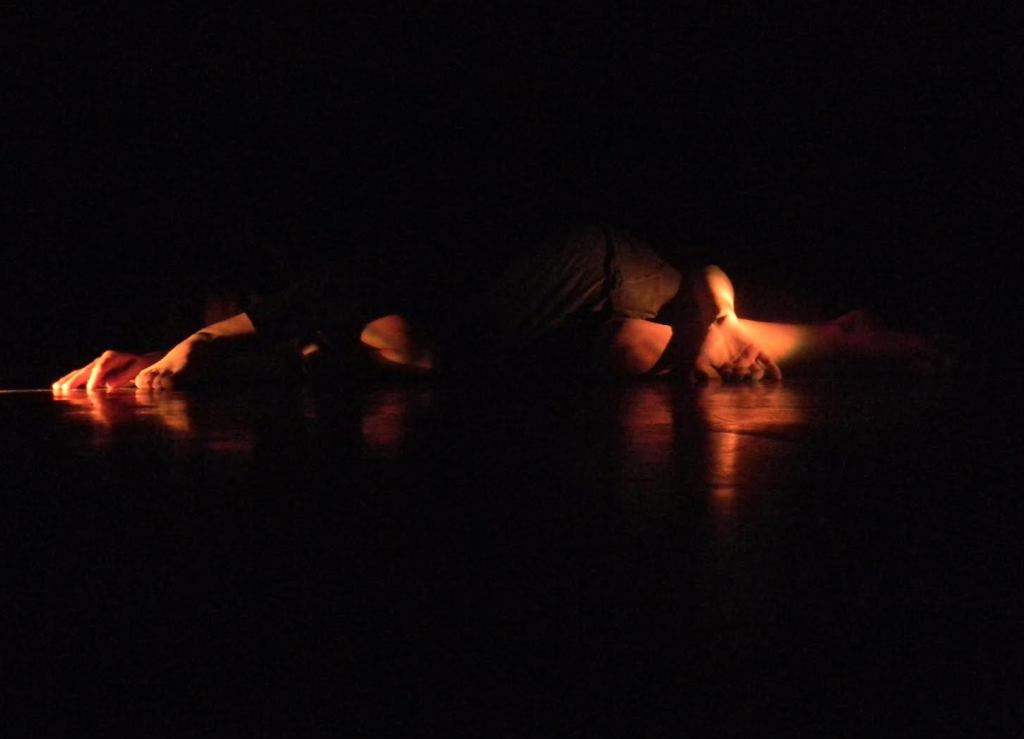 In some ways, Safe Word by Fye and Foul Theatre Company, is mindful of Safe House, an experimental piece at the Young Vic nearly a year ago- although that production carved the space not just with voices but with architectural materials and textures to play with our assumptions and notions of memory and experience, whereas here, our perceptions of space are achieved primarily through sonic landscapes.

The piece is a ‘kaleidoscope’ which explores the imagined and the real through a variety of differing scenarios which are relayed to us mostly through sound and in the dark. Occasionally, against a canvas of a slightly opaque and non-linear narrative, we see little flutterings of light, a person’s faint silhouette, a glowing box which seems suspended in the air, faintly echoing Olafur Eliasson and his light experiments, or Martin Creed and his cycle of perpetual light into dark series. Fye and Foul state that this is ‘an audio-based immense piece in which text, voice and sound unfold in the dark.’ Unfold it does, like heavy blankets, creating an atmosphere as claustrophobic as that to be found in Peter Strickland’s The Duke of Burgundy, giving us enticing snippets of a Bluebeardesque world where we hear a man exploring his various fetishes, sometimes with the upmost cruelty. There might be less a sense of voluptuousness or eroticism and more a feeling of (un)predictability which comes with the world created by such films and even 55 Shades of Grey.  Unlike work by Angela Carter, Safe Word is not about the reinvention of fairytale archetypes through a feminist prism within the realms of BDSM, nor does it seek to examine the paradoxical nature of role- play per se (or at least not in the way we may assume) or make a connection between the lessons of Foie Gras making and sticking one’s tongue down another’s throat- no, it seems that it is the secret theatre (in the widest sense) of humiliation and pain, joy and ecstasy experienced through all our senses that is challenged here and in the dark- we quickly realise, that the man speaking and commanding his partners to do certain things, might not just be speaking to others but to us, the audience- and we don’t know how we feel about this. And just as we are beginning to think that we might know, or are finally starting to make sense of the various narratives, and we realise we might be the missing link in the role play,  the piece ends- or we think it ends. We don’t know. No one tells us, no one comes out to bow, finally the house lights come up, no one was sure when to clap, if at all, or when to leave the space-  our notions of control and leadership are also challenged.

Essentially, although the opaqueness of the narrative hides the meaning a little,  the work is, I think, trying to explore the notion of theatrical participation- audience or individual- but the framework within which that can happen, could be various- as could be the context and the narratives. The show’s near last word proves this, with its hint at meta theatre. Safe Word not only relates to that word that can be uttered when sexual or other experiments have gone too far, it is also something the audience are reminded of – ‘if anyone needs help and needs to get out, just raise a hand and I will find you’ the front of house team reminded everyone as we went in. Who is playing the game and who is control? Safe Word seems to throw that out to the audience without providing easy answers.

Uneasy, distorting our ideas of control and vulnerability, Safe Word played at Wimbledon’s Illuminate Festival at the weekend. The company has a week residency at the Barbican Centre in May as part of the “OpenLab” programme and are currently developing a new show called “Cathedral”, which is part of the Small story Big City program at RichMix and is programmed for Friday the 23rd of October.

Written and devised by: Giulio Blason and Yaron Shyldkrot.