you will die laughing

It is definitely not quite as light hearted as they make out. Don’t know what show other reviewers have been seeing because, yes, it’s funny- dead funny, in yer’ face funny even to the extent of Carry On and Monty Python crudeness at times, it’s a piss take on Liederabend, where the song cycle goes from Francis Lai to The Jackson 5 to Schumann, Mahler (it becomes guess the composer, who is the first to recognise the work n’ all the other cultural connotations) but it’s also sad and it’s also melancholic. 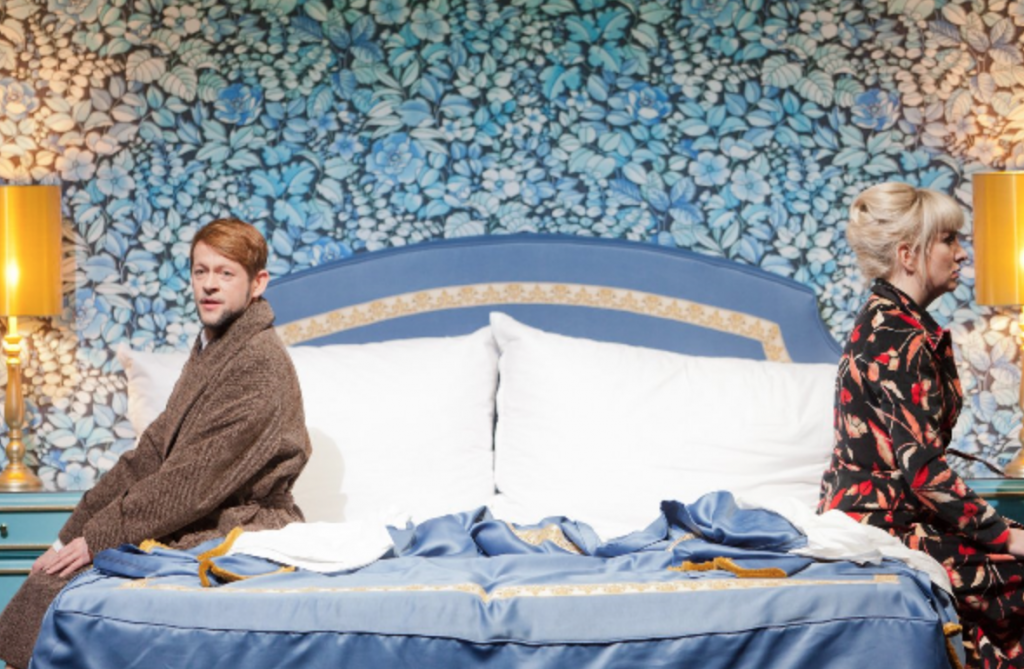 And there is a narrative of sorts. Clearly. I mean thematically at least. A cyclic narrative, let’s say. We begin with a man asleep in a King Size bed in a fairly opulent hotel room. Although, the doors on the cupboards don’t look real, instead the impression is given of an oversized doll house on Duri Bischoff’s stage. The walls are pasted in a kind of chintzy blue paper which, if it had been yellow, would have inspired an entirely different set of ideas. But never mind, we’re not going that way…  But. The aesthetic is set for a ‘European’ art house experience- think the later films of Bergman, or Fassbinder or Wenders even. With the dead humour of Roy Andersson. The man in the bed wakes. He dresses accompanying himself with a rendition of Wachet auf and he is joined in this repetitive loop by the rest of the cast. We get it, it’s a cycle (the cycle of sleep? of dreams?) The man disappears and reappears by the piano. A bell boy and a maid enter the room and get into bed. An older woman, who looks like she’s stepped out of Fassbinder’s Fear Eats the Soul wanders by. No one is concerned. We continue with the couple as they try to sleep and think of love- unrequited, telepathic, love that rips your heart out with longing, love with too many expectations. ..They get out bed again, become different characters (surely surely we see a bit of Beverly Moss from Abigail’s Party in Tora Augestad as she sidles up to Bendix Dethleffsen?) disappear into wardrobes, stand plaintively in front of drinks cupboards they cannot reach like characters out of Last Year in Marienbad.  A spotlight keeps switching on and off but no one’s going to stand in it, though we wait with baited breath. The older woman, who wanders through the room like a somnambulist- Alma Lieder-Abend, played by Nikola Weisse- is a hoot. She is quite plainly one of those hotel guests who goes around stealing everything because she is so lonely. She sits dejectedly in front of a music stand she has obviously nicked and secured away in her handbag that seems like it has no end to it and proclaims that ‘some music stands have never heard a note’ with such sincerity we begin to feel sorry for it. She is of course projecting  and she comes out with other such mutterings deliberating the nature of thought and existence (are we now in a Rohmer film too?)- if trifling and absurd things weren’t going on around her, we’d be forgiven for thinking this was a female version of the beginning of Beckett’s Murphy as well. Sort of. It’s that kind of world.  Tora Augestad and Michael von der Heide carry on changing character, dictated, it seems, by the music coming from the piano and electronic key board played by Dethleffsen- catch his eye and he’ll make you laugh more, especially during Tout, tout pour ma cherie. No don’t actually, you might die laughing. And all the time, all through this the actors are doing silly things. Only, you must realise, they aren’t silly things at all. Turn a camera on yourself for a day and I’m sure you may laugh as much. Or may be not as much but anyway, go to any public place, even if it is just the underground, and sit around and watch a bit and you will see how absurd our behaviour is, especially when isolated and out of context. And Marthaler must spend a lot of time in hotels. Cos, you’d be surprised what folks get up to in them- believe- and it looks like this one’s no different.

The surprising thing is coming away and thinking, oh shit, is this allowed? Looks like it is. And I’ve heard such shows, in Germany at least, can get to be 6 hours long. Or thereabouts. London needs it. More of it please, more!

This show finishes tomorrow. But there are tickets still available and cheap ones. So go and see at the Linbury Studio Theatre, Royal Opera House.