unique for kids' theatre, timely programming by the Unicorn

There are no political parties, and there is a policy paralysis: this is a mocked up election Ontroerend Goed style. The Belgian Company have put the mechanics and psychologies of voting at the core of their production Fight Night with the microscope firmly on the assumptions and perceptions made by voters-  you might well wonder, walking away from this, what May 7th is for. 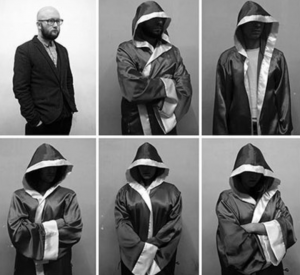 Defying our theatrical expectations, we are presented with 5 protagonists on a bare boxing ring  complete with a drop down microphone, who batter us soapbox style with their soundbites- using a different set of criteria every time and compered by suave front man Angelo Tijssens, the audience are asked to vote for the candidate they like in each round.

‘With word and deed we insert ourselves into the human world’ wrote Hannah Arendt. This is an adequate thru line of what Fight Night is all about- not the words and deeds of the candidates though but the words and more so, the deeds of the audience. They are the real protagonists.  Round 1 asks its young 14+ audience to vote on look alone. Then the candidates pitch to those in the demographic they think will vote for them. The stakes get raised as candidates are kicked out, either by others joining in a coalition beyond the voters’ control or through their ‘moral’ but confused outrage. Those with the largest support are not always necessarily the winners, those in the minority complain they have no voice. An underdog who lost in the first round suddenly becomes everyone’s favourite- we realise pretty soon, that we don’t have any power at all and that, in the audience, the majority don’t trust the majority (Oh England moaned Angelo).  Eventually, there is a chance for audience members to opt out. But once you kick yourself out of the voting system you don’t have a voice- even if you are the majority.

Fight Night asks you to consider how an audience/ voters will manipulate and be manipulated. It challenges our perceptions about what we base our choices on. Do we really care about what kind of clothes some one wears? Well, perhaps we should but for the right reasons- for, a little bit like the Tate’s relationship with BP, it is no good having a politician campaigning for workers’ rights if they can’t admit they are wearing clothes that have come out sweatshops somewhere in China. So the show is also about honesty. It’s also about courage and our tribal feelings. When called to make a stand against the system not many of us moved until provoked a second time. Now this could have been what a colleague termed an ‘I am Spartacus’ moment or, it could have been a compulsive show of support and solidarity. You decide, for the production offers no answers.

We also see how emotions are tied to ideologies and genders.. the women candidates are gender acquiescent and take on the negotiating roles in hypothetical situations- we might be obliged to ask ‘who speaks, and why? and from where?’ The men conform to stereotypical differences- the metrosexual, the hunter and the ascetic. The women though, suffer no such cultural mythological dissimilarities.

But Fight Night’s uniqueness here comes from being in a children’s theatre. It is timely programming by the Unicorn, it is mature challenging stuff for 14 year olds and challenging for the production- we are not exactly dealing with a mass of people who have political allegiances already or have the right to vote, they are not the choir who ‘deserve to be sung to’. It feels, because of this, a radical act. Because it gets our young people to ask questions about why they might vote and for whom and what this says about them. And we need theatre like this to talk politics to kids, because, looking at the statistics below, a lot of them won’t be getting it in schools…

Fight Night continues at the Unicorn Theatre until 3rd May. There are a series of debates and talks after some performances. Check the website for more details.

Presented by Ontroerend Goed, The Border Project, Theatre Royal Plymouth, Richard Jordan Productions and Vooruit in association with Adelaide Festival of the Arts

Written by Alexander Devriendt and the cast

Localism: as if people mattered