Eclipsed may be about a period during Liberia’s Civil War when the country was ruled by warlords but it’s also a paean for women and champions those who would eventually go on to lead the country to greater stability. 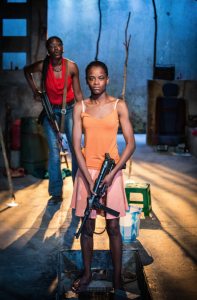 Danai Gurira’s play throws us into the midst of a concrete compound, a harem for a violent guerrilla CO, whose invisible presence dominates the lives of his two sexual slaves. But soon, a young girl (Letitia Wright) protected by wife No.1 (Michelle Asante)  becomes wife No.4, causing hierarchical chaos, especially when No.2 (Faith Alabi) now a soldier and ‘business woman’ arrives back on the scene:  No.4 is squabbled over like the clothes the women glibly reappropriate from the CO’s dead victims. When Big Jue Charity Worker Rita (T’nia Miller) from the Women for Liberia Mass Action for Peace pays a visit, the quintet is complete- the scene is set for us to see how the war blights the lives of these very different women.

Except, the play is far more complex than this and, in a sort of unofficial Sande society, shows a collective female soul as scarred as the wasted landscapes the war leaves behind. Chiara Stephenson’s stage is semi traverse, the women move up and down it as if on a catwalk (think a recent staging of Caryl Churchill’s Far Away, the effect is not too dissimilar) we are the UN peacekeeping spectators, watching the atrocities as if from afar. At times the women stick the gnarled branches of trees into the concrete as if it is being raped, cut or stabbed. The theme of why people abuse is one of the channelling rivers of the piece. As a way of escaping the CO’s sexual favours, which for No.3 (Joan Iyiola) includes motherhood, No.4 chooses the life of a female soldier, only opening herself to further opportunities to abuse and be abused- a lesson in how the mind will skewer and pressurise a person’s moral compass when survival becomes the primal and only drive to live at all: she believes she has become  a soldier to oust brutal drug crazed President Chucky Taylor, she convinces no one, least of all herself. None of the other women are morally free either- No.3 steals clothes that were meant for No.4 and her bitterness is as sharp as any blade, No.2 is a woman who believes that in order to survive she must be like a man, the gun becoming the stick she rapes life with instead of the penis. The women’s lives are lived under the presence of some ‘other’ (Liberians believe in hidden forces)- whose forgiveness Rita seems to seek by giving up her business empire to promote peace- but she too is kidding herself.

And there is a continuing theme of disassociation. Not only are the audience made voyeurs by the catwalk like stage, not only have the women forgotten their birth names and see themselves only as numbers or, when soldiers, as vengeful spirits (Disgruntled or Mother’s Blessing)  the women are also detached from their own bodies: dressing up for the CO and wearing wigs is important, caring for themselves is not. When each woman returns from their sexual encounter they can hardly bare to touch themselves- they are unable to embrace their own pain or wash their genitalia with any compassion for the self. Which means they can only understand their pain by proxy- by reliving it through the pain of others- ‘Bill Clinton’s Hilary’ for example, No.4’s horrific war experiences, No.2’s exuberance at ‘firing’ on a man, or taking clothes from other dead women or selling them as sex slaves.

Each woman though, is a reflection of what the other has lost. They remind each other of what they once were, former selves that exist at the back of their minds like shadows in Mark Howland’s sometimes glaring hot Liberian light. Often at critical times, Danai Gurira’s writing brings the women to personal crises- so that we realise that they will either be reborn or will die. For a moment No.1 cannot cope with what she sees the abuse has done to her- like a cancer, its effects have remained unseen, inexperienced and hidden to her- when full realisation dawns, it is almost too much.

But castration is also a pertinent unsung theme. For No.2 a gun is empowering and castrates any man who may abuse her- ‘her’s’ can kill, she is a double threat to the warlords who treat their women as objects. War and its physical attacks on the body is referred to using present participles- ‘chopping’, ‘cutting’- language essentially male. Yet, Danai Gurira’s sometimes use of Liberian English also adds a femininity and warmth to it, conveying emotion by adding ‘o’ onto the ends of words or phrases: there’s a conflict of cold/ warm, hard/soft, man/woman- none more so when No.4 cross dresses when she becomes a soldier.

Hope, flavoured with humour, is the pervading feeling in the play though. The women almost become a Sande society and on Chiara Stephenson’s Nash like landscape, Letitia Wright as No.4 stands as symbol of the country’s future- with perhaps some sense of its future struggles, not least with the still to come devastating effects of Ebola.

Eclipsed is at Gate Theatre until 16th May