Review of: Blush of Dogs

although it's in yer' face, this is not what will shock you

What price forgiveness? How hard is it to really forgive? When we forgive is it subconsciously conditional? And how much do we really learn about ourselves in the process? Is the act a trap? 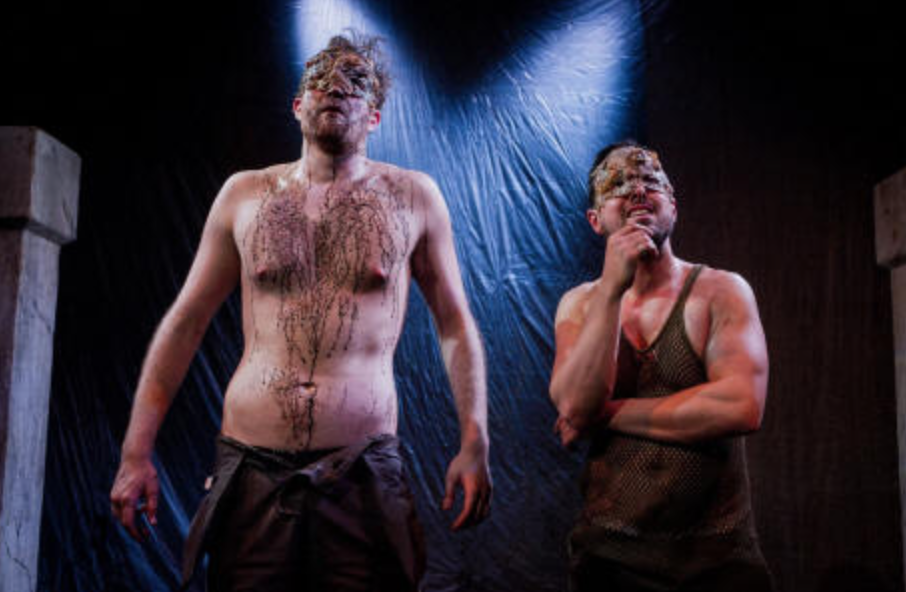 Ben Alderton as Atreus and Mike Corsale as Thyestes

In Fragen Theatre Company’s new play Blush of Dogs, a modern reworking of Seneca’s myth of Thyestes by writer/ director Roland Reynolds, the price is blood. Lots of it. And rape, suicide and murder. And the protection of a relationship at any cost. And the spoils of this battle of forgiveness from one twin like brother to the other, in this case King Atreus to his excommunicated murderous sibling Thyestes, are women caught in the middle and sanity.

On a stage that seems a wasteland of capitalist trash littered with orange juice bottles filled with all manner of liquids, this odd balancing act between a classical Greek myth and contemporary naturalistic play unfolds itself to the background of  whirring helicopters, as, like raucous harpies, two servants squabble over the return of Thyestes, whose crime was an act of Genocide against his brother and his own people. Now conflicted Atreus is ready to forgive and invites his brother back into the fold, but it is a fold where many wolves will be unleashed as a result. And although stage designer Isabella Van Braeckel pays homage to Greek theatre, her Doric pillars are collapsed and desecrated, the tarpaulin like material that covers the back of the stage reminding us of contemporary warfare, of insurgents and rebels- and one message is obvious- a rejection of the old ways of doing things and telling stories in favour of the new.

Anna Procter plays Aerope, Atreus’ unfaithful confused wife and Queen. We see the depths of her mental instability and emotional entanglement that is her love for Thyestes.  After Atreus discovers their affair, she struggles to leave messages of explanation on his mobile (is this a joke on Darian Leader’s book Why do Women write more letters than they post?) alternating between hate and love, before screaming that Thyestes raped her. But too late, the brothers are already fighting it out, in an erotic sequence that has you thinking of Ken Russell’s Women in Love, albeit in trunks and not in birthday suits (why not totally naked though?). But by the time the fight is over, Aerope has already followed the course decreed by the Gods with fatalistic consequences- setting in motion the myth’s terrible denouement.  Thyestes has indeed come back but he is little changed.

At the heart of these three tragic comic figures- Mike Corsale injects a sort of London street wise humour into the immoral Thyestes that makes him likeable-  is the blind Tiresias, who sees so much with his soul yet ultimately, is cheated out of sight by his own eyes. We feel that Tiresias is us- he or she who pretends to be blind in order to see (Thyestes and Aerope fuck in front of them as he/ she makes a powerful speech to the heavens). Tiresias the blind prophesizing slave of Atreus who knows the future, but is powerless to stop it. But all three characters are also Tiresias, wearing a Gas Mask when it is his or her turn to speak.  Tiresias is a visualised psychosis belonging to all three, he/she sees for all three, he/ she serves as their inner guiding moral law and light and voice,  so that now we feel, it is not so much the fate decided for them by the angry Gods that the three must avoid, but the traps and horrors of their own unleashed inner darknesses. Of which Tiresias may be a part. We see this, even if the characters do not.  This is what makes it modern.

But this is also in yer’ face theatre. The play seems to reach out at us and shake us till we get it- although there are many many messages to get. This is a tale of blood brothers who cannot survive without each other. Who will do anything to the other in the name of love. And that love is unbreakable, it reaches out beyond state and country and family. And to drive this point home, Roland Reynolds does not hide the play’s most gruesome acts off stage- he does not want to fuel our imaginations in that way. We get the eye gouging, we get the child eating, we get the sex, the rape, in scenes as explicit as any in a Sarah Kane play. It is experiential. And when Atreus, played by a serious and at times explosive Ben Alderton, finally feeds Thyestes his children (here they are 3 daughters, who Atreus initially wished to rule) the effect is not as he imagined. Thyestes respects his capacity for revenge rather than hates him. One feels we are in the same kind of dynasty that kept Saddam Hussein’s clan and his officials like Ali Hassan al-Majid, so tightly knitted together and yet are we shocked? We are, but we are more shocked by the reactions of the two brothers, reactions that make this piece zeitgeist.

And the decision to make all the victims, in this version at least, female, is a reminder that whilst in the Western world at least, women are mostly on the way to equal rights and do not expect, usually, to be the victims of a society that sees them as the weaker sex (at least not overtly) there are other countries, cultures and other worlds where women suffer exceptionally in the name of personal politics masquerading as idealism, which is what we get here.

Tonally, Roland Reynolds seems to be going for a mix between the finer points of relationships as we might see in any Chekhov play, with the gruesomeness of in yer’ face theatre within a loosely adapted Greek Myth framework. There are many ideas to take in-  you’ll find yourself laughing at the play’s audaciousness and incongruities, but as much repelled and shocked by the flippancy of the semi serious Atreus and ever mocking Thyestes.

The result is an uneasy juxtaposition of myth and realism. Perhaps a comment on extremism. Which is what extremism is- myth, fancy, bigotry, fundamentalism, clashing with painful reality.

In yer’ face  theatre, the desecrating Blush of Dogs continues at Tabard Theatre  until 25th April