Urgent, unmissable student theatre that is deeply, furiously political. Unafraid of offending, this is the performance of a disaffected youth culture.

Hull’s Pub Corner Poets closed the National Student Drama Festival last Thursday with their furiously political show, Angry. The NSDF selects twelve of the best student theatre pieces of the year to attend the annual festival in Scarborough and play to an audience of hundreds of other students, from every corner of the UK. On Friday evening, Angry and its writer, Josh Overton, deservedly collected the Sunday Times Playwriting Award for the piece. It’s hard to define exactly what Angry is – certainly, it has enough of a script for it to be considered a play but it’s also a punk gig, a cabaret piece, performance poetry and something vaguely autobiographical. It’s also brilliant and not for the faint hearted. 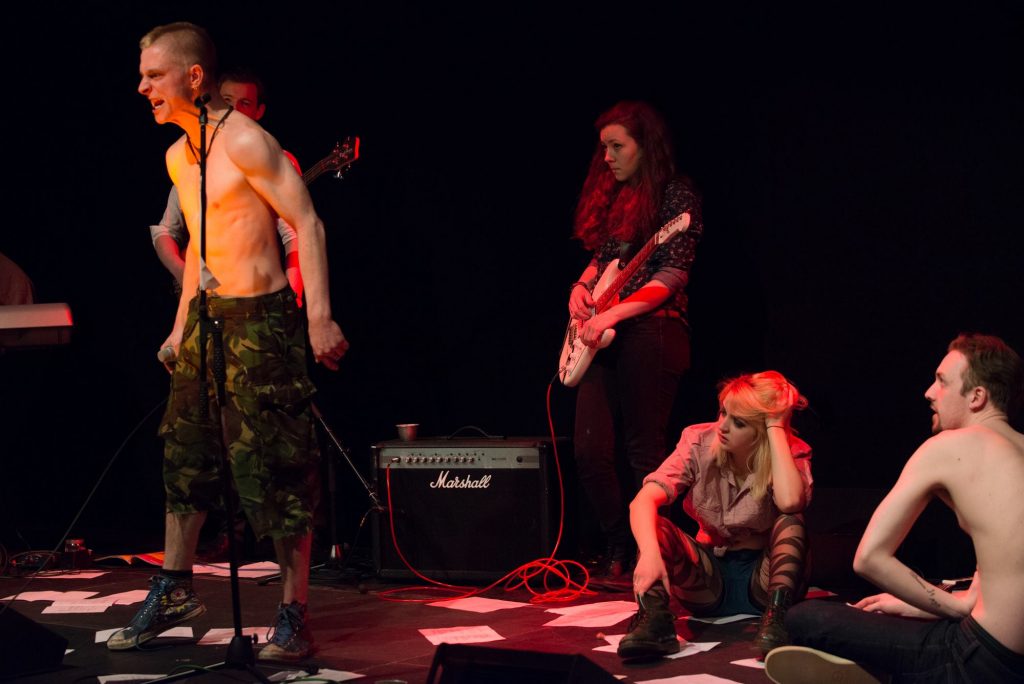 Students are naturally ferocious critics and there’s always some controversy at the NSDF. Audiences ask why a certain show made the selection, or how anyone could possibly have enjoyed what they’ve just seen. The Pub Corner Poets actively seemed to court this controversy in the lead up to the run. They told anyone who’d listen that it was an offensive show that you would either adore or leave. I saw the show twice, and people left both times. The cast drop every cuss in the book along with some troubling choices of homophobic and racial slurs and a depiction of sexual violence that all border on extremely bad taste, if not downright disrespectfulness. That everything in the show serves their message is what lifts Angry from arrogantly offensive to radical political theatre. As an audience of young people, we’re forced to consider why we gasp or groan at a blackly funny 9/11 joke, yet remain apathetic about the problems facing our generation.

The Pub Corner Poets have a long list of targets. Angry blames a raft of targets including the coalition government, Thatcher, the establishment and capitalism for creating a youth culture that is deeply disillusioned and troubled. It takes shots at Christianity and Islam, the American Right and Russian politics. Running for around an hour and fifteen minutes, Angry alternates between furious and despondent monologues delivered by seemingly semi-autobiographic personas and songs, like ‘Why is Everyone I Hate Still Alive?’, that offer a portrait of a disappointed generation.

The show isn’t perfect. It runs a little too long, and when I’ve seen it, the casts’ energy seemed to flag towards the end of the show. But what a climax it comes to! The show is one of the most exciting things I’ve seen in a long time. Without spoiling the end, the Pub Corner Poets drop any pretence of character and offense, and reveal a list of demands, of wants and needs for this disaffected culture. Its politics may be obvious, but this is a strength – this student theatre is urgent and necessary.

Angry doesn’t have solutions to the problems that it rages about, but I don’t think it needs to. I’d thought previously that political theatre should offer us an answer in some form, that it should both portray the issue and give us hope for the future. I’m swayed by Angry though. Being a similar age to the Pub Corner Poets, I’m in agreement with them: there’s a lot of issues in the world that I’m angry about and that I can’t do anything about. Angry suggests that the struggle might be futile, that the world might already be ruined but demands that we should protest all the same. It shouts that we shouldn’t go gentle into that good night, and I think that it’s about time that somebody told us this. Student theatre need not be perfect – it can run too long and it can risk offending the audience – but it does need, now more than ever, to be angry. It needs to be political. It will be up to us to change the world and the Pub Corner Poets are right: the first step is to get angry.

Angry was selected for inclusion in the National Student Drama Festival 2015 (28th March – 3rd April) held in Scarborough. Further information about future performances by the Pub Corner Poets can be found on their website, www.pubcornerpoets.com, or on Twitter.