At the heart of the novel Vernon God Little is a culture of moral bankruptcy that forms itself around a sales message and its attempt to sodomise the America looking back on itself (here personified as Vernon) and wondering what happened. Read any of author Dirty But Clean Pierre’s interviews and you’ll realise he was interested, still is, in American naive culture and the America that actually is and the gap in between. And what happens to those who fall through those gaps. Those who aren’t smart enough, monied enough, educated enough. People like Vernon and his friend Jesus. 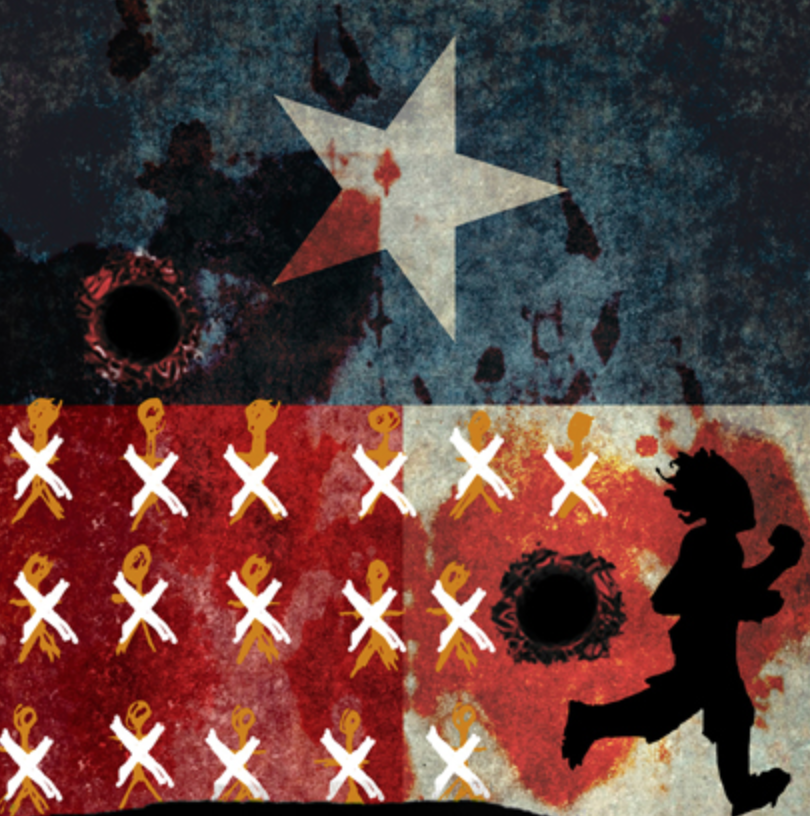 Tanya Ronder came along in 2007 and adapted the book into the play with songs we all love and know, which premiered at the Young Vic directed by Rufus Norris. Now we have a revival at The Space, East London’s small theatre venue on the Isle of Dogs. In both the novel and the play, Vernon’s victimised. Initially he was never meant to be, initially he was the criminal, but for DBC Pierre to create a believable hero he could not be guilty, he had to be innocent. Instead you might say that culture is the guilty party, the commercialism of misfortune and criminal acts the result of a society’s desire (in this case fictionalised Martirio, BBQ sauce capital of Texas) to find fame, that 15 minutes of glory purchased on the back of someone else’s misfortune. Today, we have examples of it everywhere, we live in a culture that glibly profits from and exploits the horrors endured by others. Vernon is an example of what can happen when that profit and exploitation metamorphoses into an absurdist surreal nightmare complete with pedophile psychiatrists and branding and trinket trophies, all exalting in Jesus’ murderous school gun rampage. Vernon is accused of being an accessory to dead Jesus’ crimes, and as the world’s media piles into Martirio picking over the spare rib scraps, no one cares much whether Vern is guilty or not. Not even his mother, especially when TV repair man come self styled video journalist Eulalio Ledesma moves in on the scene. We then follow Vernon as he goes on a journey of self discovery, grows up quick and learns how to be Vernon ‘God’ Little, ‘giving the people what they want.’

This interpretation at The Space by fledging Burn Bright Theatre– their inaugural production under the helm of director Katherine Timms- is a fast paced affair. Which is fitting, it must not be anything else and the original and the revival at the Young Vic, both of which I saw a thousand times in my job there, rocked along at the pace knocked up by one of its many trademark numbers, Like A Rhinestone Cowboy. But The Space, one feels, can’t quite accommodate the canvas needed by such an animal like Vernon God Little, though the creative team try and use the theatre’s different levels, nooks and crannies, to varying effect. But the play’s chaotic structure, symbolised by its cast of an energetic 10 doubling up in roles, its need for movement, demands a bigger stage- if only to give us a sense of the range of Texas’ four physical regions, in turn highlighting Vernon’s own isolation and Martirio’s moral bankruptcy and reliance on materialism. There is a contrast lost too between the bleakness of Martirio’s heart, which seeps into its landscape, and what should be a warm hot Mexico, where Vernon, on the run, retreats and finds himself and his new found friends poor but spiritually wealthy. Neither can Lighting Designer Andy Farrington’s light make up for these inadequacies, of which the decision to put the production 3/4 in the round, must play a part.

But what the production lacks in resources and budget, is made up for by the energy and dedication of a committed cast. Albeit a young cast. Startlingly good though some of the actors are, Bart Edwards especially as Lally and  Laura Hyde as Pam, one wonders why they are so young when the novel and play demands actors of the right age. One of the play’s main themes re: the consumer driven society that is passed down from white trash parent to white trash child, educated or uneducated, is slightly undermined, as is the sense that Vern is against this adult world- the sex mad food mad grown ups and those under their thumbs. The insufficient gaps in playing ages makes this look like a graduate production stuck for older actors, no matter the layers of make up to hide convincing youth. It also has an effect on the value of older and wiser Pam’s words and Laselle especially- Chin Nyenwe as the axe murder come preacher on death row excels but youth cannot make up for the weight of experience and wisdom got through belated tragic hindsight that that character must communicate.

But, as written in the program notes, the company want to give this production their own take and they certainly do that. Gone are most of the set pieces of previous productions and a score that provided a distinctly sonic landscape that painted a psychotic Texas and a Mexico full of gaiety and gentleness. Instead we have underscoring that points less to an emotional geographical map and more to a sort of cultural blandness. Set design follows suit, and instead of surface or moveable objects transforming into  projection spaces wherever possible, we get flat screen TVs. The effect is to bring out the social realism of the play and a kind of naturalism so at times one thinks we are in the gritty worlds of someone like Peter Gill, sometimes at the cost of its dark comedy. We also don’t think anything of Ledesma’s ridiculous efforts to be a video journalist, it is built into the play without song and dance as we realise that now the likes of him are not only expected, but even demanded to be part of the unseemly debris that accumulates around such massacres. Neither are we particularly surprised when Ledesma makes it real, it is sort of expected. In 2007 this was more of a shock, now sadly, such a fast and prominent rise to fame is all too familiar. The production puts this across and rises to the challenge of being pertinent in 2015, even if some of the comedic moments built up around Vernon’s mother especially, don’t quite find voice in Katherine Timms ambitious production.

Callum McGowan carries on the tradition of baffled innocence as Vernon, and Elinor Machen -Fortune as Ella harks back to the early performances of Mariah Gale. They are supported by a strong ensemble cast who give a good sense of this chaotic turbulent world. Original VGL aficionados might find themselves challenged, newbies to the production will have a whale of a time. Ultimately the beast has not quite been tamed, but the company and Katherine Timms are aiming high and it will be interesting to see what’s next.

Vernon God Little continues at The Space until 11th April