Review of: The Dead Shepherd

Sex. Drinking and bawdy brawls. Spies. Sodomy. Shady meetings at night. Subversive groups. Plots and playhouses and playboys and patrons. This is not London 2015 but Marlowe’s Elizabethan England and more specifically, Deptford Strand. 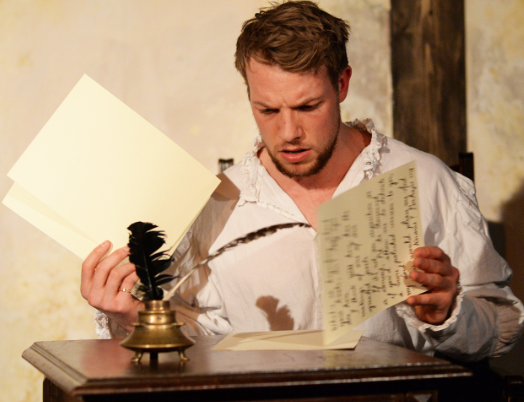 Robert Pope and Ian Dixon-Potter’s new play, directed by Linda Miller, tackles the run up to playwright badboy Christopher Marlowe’s murder in a Deptford Tavern with enough tricks and tricksters to make their theory that Marlowe was a victim of Sir Robert Cecil schemings, afraid of Marlowe’s Catholic propaganda and also atheism perhaps, seem convincing.

Onstage we get the whole melee of the day’s poets and intellectuals- Thomas Kyd, Sir Walter Raleigh, Giordano Bruno, William Shakespeare, the Earl of Southampton  and Thomas Walsingham, the wealthy patrons, all vying for attention, and the play is top and tailed by an old Shakespeare in his  Warwickshire home challenged by Penelope, the Earl’s daughter, who infers that the famous playwright is not rebel enough like his old friend Marlowe.

Although the play jumbles up true fact with fiction we are given an engaging portrayal of an Elizabethan England under threat from the Spanish, reeling from the Dutch Libel Case, over which Thomas Kyd was arrested and had his thumbs screwed, and a London where no one could be trusted- the city was full of spies, and it is well known that Marlowe was one of them, engaged by the protestant Government and Queen to infiltrate the papist seminaries.

Marxist Bingo this isn’t though. The young writers and patrons, played with vigour and passion by a young  and talented cast, give a sense of young men at the frontiers of their intellectual development who, apart from Kyd, lack remorse  or concern for religious beliefs and personal safety. There is a gung ho attitude about their heresy which is breathtaking- certain death could face these heretics who dare to consider pantheism at a discussion during the sitting of The School of Night.

Although purists may be annoyed at the artistic licence the play employs, one can’t help but feel how timely it is. Homosexuality was punishable by death, although it was prevalent throughout the middle ages. We can think about IS, Uganda, Russia now. The financial concerns and questions of how to fund work still remains problematical. But a clear resonation is the danger both Kitt and Will were in for speaking their minds. If we needed a play to convince the government of the importance of the arts in our now secular society and wider world, this would surely be a contender. Flamboyant Kitt Marlowe was a passionate defender of freedom of speech and after watching this play, an audience cannot leave without feeling indebted to such playwrights like him and William Shakespeare, ardent challengers of the status quo in what was then a very dangerous world. I know I now feel a certain debt which I did not before.

Passionate, ferverent, The Dead Shepherd continues at the White Bear until 28th March

1615: A reclusive former playwright, mysteriously retired at the height of his powers, recounts a harrowing tale to the daughter of his estranged patron. He recalls how he began his career in the shadow of Christopher Marlowe, poet, heretic, sodomite, spy and the greatest playwright of the age.

1590: Young Will Shakespeare, newly arrived in London, falls in with Marlowe and is introduced to The School of Night, a secret society whose subversive gatherings come to the attention of the most powerful man in England, Her Majesty’s Secretary of State, Sir Robert Cecil. Will is plunged into a sinister world of lies, conspiracy, betrayal, torture and revenge, culminating in Cecil’s decree to have Marlowe’s seditious mouth silenced for ever.

1593: As twilight falls across the Deptford Strand a scream rings out from a rooming house on the filthy dockside. Marlowe is dead, taking with him the dark secrets of Elizabeth’s court to an unmarked grave.

The Dead Shepherd is a new play about Christopher Marlowe by Robert Pope & Ian Dixon-Potter.