Review of: The Chair

Evocative, interactive and has the kids on the edge of their seats

We enter the Clore studio through a narrow passage way and tiny door as if characters in Alice in Wonderland, although we emerge in the docks of Cardiff’s Tiger Bay and Owain’s Barber Shop, where we are in for a bit more than a short back and sides or a shave. 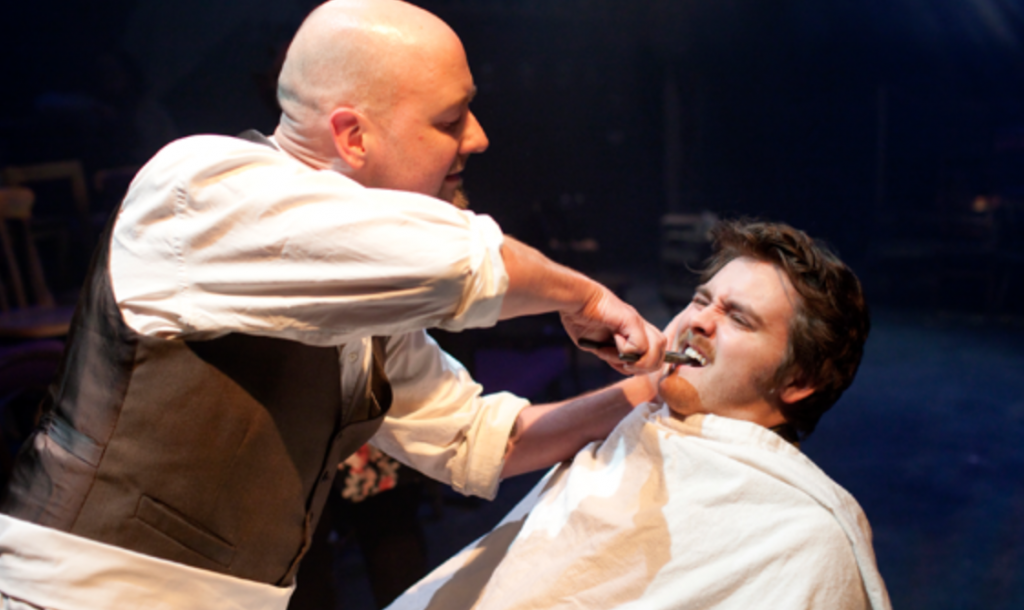 Gary Lagden and Christopher Preece in The Chair

The space is deceptively large- it wails eerily like the hull of a large ship, frustrating our spatial anticipations. Spoils from Owain’s nautical travels and tales jostle for space like a Damien Hirst exhibit on Louie Whitemore’s evocative stage- these are the ghosts of the Welshman’s stories. As his assistant Norwegian Lars prowls like a restless watchman, the Barber, looking for customers, addresses the young audience: his words are softly spoken, paced, they hang in the air with an understated sense of menace. We feel there is a gradual build up to something, something immense and terrifying and at first the children are on the edge of their seats, taking turns in the time machine Chair, which transports us through the stormy seas of Owain’s own memories and sea faring fables and spoils.

At first, as the production progresses one thinks of the speakeasies and warped damaged characters of Eugene O’Neill- but for kids. We are in the horizonless lands of the no hopers and the weathered, of the possessed and the possessing, the haunted and the haunting. But Owain changes course as quick as a ship goes about and, running over 3,000 year old ghosts along the way, we reach, 3/4 in, the heart and point of this tale where your nerves, quite literally, need to be made of steel- or else you might find them fractured.

But it’s just as we are getting to this point, just as we are settled in to it, finally,  that The Chair ends and the house lights come up with all the surprise of an ocean sunrise- the effect is like being bathed in a ship’s  cold wash.

However, writer/ director and composer Lewis Gibson gives the two cast members some good exploratory material – with some fun honky tonk piano and also, quite potentially, impressive set pieces. It’s great when the heavy drapery unfurls and forms the sails of the ship’s mast (who did not play these games as a kid?) and the use of the piano reeling to and fro and from side to side to emphasise a rolling boat in a storm, almost works. But I wanted more spectacle, more intensity and a clearer narrative arc befitting the wonderful characters clearly evoked for us by the director and the actors.

Gary Lagden, as the Barber, expertly draws in his young interactive audience, providing just the right amount of menace tinged with an understated gentleness. He presents to us a flawed man, marked forever by an experience which forms the centre of the production. Christopher Preece too, as he paces and skulks, proves his skilled musicianship. However, one fears that by the time the story has got to its main thematic concern- an important fable about being able to see yourself for who you really are, the attention of the audience may have been lost with all the – fun as they are- previous diversions and (almost) false trails that the other stories provide.

Evocative, stormy and scary, The Chair continues at the Unicorn until 12th April.

Written and directed by Lewis Gibson