Dave’s House, an up-and-coming Devon theatre company, are currently developing and touring a darkly hilarious piece of original theatre.  Entitled Strange Matters, the meta-theatrical production pokes fun at everything from theatrical egos to the latest internet trends.  They took their production to the Bike Shed Theatre’s From Devon With Love Festival on 28th January, where it garnered a very positive reception.  They aim to take it further afield throughout the coming year.  With the energy and enthusiasm of the cast and the bitingly, brilliantly screwball script, one hopes it receives such success elsewhere as well. 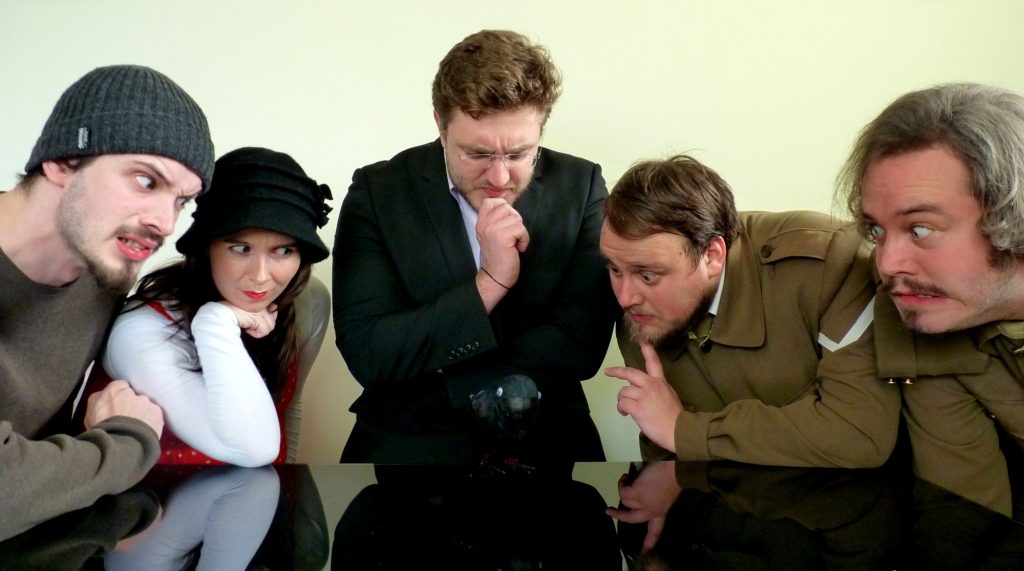 The play opens with a play: the actors strike melodramatic poses, proclaiming sensational lines, until it appears that one actor misses his cue.  This play-within-a-play quickly disintegrates as the director runs off in search of the tardy actor and the rest of the cast argue about whether to continue on, give the audience random sections of performance, or merely wait.  And argue.  And have existential crises.  And wait.  Meanwhile, Steve the tech operator – on the other side of the county in Plymouth – tries in vain to keep the actors (and audience) calm and cool; when this fails, he begins to take matters into his own hands, as he seems to have an uncanny sense of what is going on.  The result is twisted, dark, entirely unpredictable hilarity.

Unlike the play-within-a-play’s script, the dialogue in the central plot is sharp and well-delivered.  The entire cast, who understand their parts splendidly, knows the manic tone they are aiming for and achieves it.  Nothing is sacred in the humour; actors’ fabled sensitivity, dreams of fame, under-appreciated techies, internet obsessions, and Plymouth all come under attack.  Unsurprisingly, the scene-stealer is Steve, whose witty observations and wry comments (and soon megalomaniacal omnipresence) upstage the onstage exchanges.  His tech-cued interactions are timed flawlessly with the live actors, keeping the pace snappy and landing all of the gags.

As mentioned previously, Dave’s House and Strange Matters have left Exeter for new, grander things, and these further forays are eagerly anticipated.

Seen 28/01/2015 at the Bike Shed Theatre, soon touring in Devon and Somerset. More information can be found at Dave’s House