Joey the equine star of War Horse joined fellow cast members and thousands of people across the UK taking part in Wear A Hat Day for Brain Tumour Research. 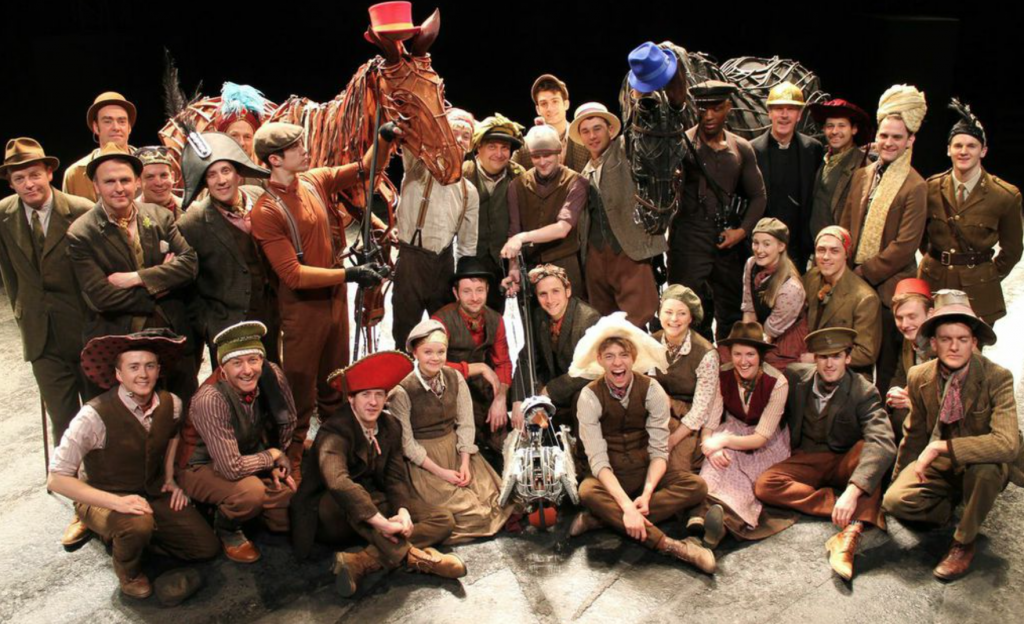 The touching tribute took place in memory of 60-year-old Victor “Vic” Hamilton, a driver at the National Theatre, who lost his life to a brain tumour in March, National Brain Tumour Awareness month.

War Horse is one of the National Theatre’s greatest ever successes and opened at its original South Bank home in 2007 before transferring to the New London Theatre in West End  in 2009. Theatregoers remain captivated by the story of Albert and his beloved horse as they face the terror of the front line in France.

The puppets, cast and crew were well known to Vic, who leaves a wife, Kim, two children, and two grandchildren. He had worked in the theatre’s transport department for more than a decade. Driving one of the National’s vans, Vic’s responsibilities included the collection and delivery of props, costume, lighting and stages for War Horse and many other productions.

Also taking part in Wear A Hat Day with photocalls on stage at the National were the cast of Behind the Beautiful Forevers, Man and Superman, Treasure Island, Rules for Living, and Dara.

“Vic was a well-known figure with a great sense of humour, always having a joke or a story to tell. He had a caring nature and was very much a family man who would proudly show off photos of his two grandsons at any given chance.

“He was taken so suddenly from us and we are proud to be able to pay this tribute to him while helping to raise awareness of this terrible disease.”

Wear A Hat Day events are taking place in businesses, schools, universities, shops and offices across the UK on Friday 27th March with people donning beanies and boaters, top hats and trilbies, fascinators and fedoras, and making donations to Brain Tumour Research. The charity funds a pioneering network of research Centres of Excellence across the UK. A donation of £5 can be made by texting the word HAT to 70660.

Crispin Zeeman, Head of Communications for the charity, said: “We are enormously grateful to Joey and everyone at the National Theatre for helping us to raise awareness in such a unique way as they remember their colleague.

“Brain tumours kill more children and adults under the age of 40 than any other cancer… yet just 1% of the national spend on cancer research is allocated to this devastating disease. This is unacceptable!

“We are striving to fund a network of seven dedicated research centres whilst challenging the government and larger cancer charities to invest more in brain tumour research. Help us fund the fight. Together we will fund a cure.”

Brain Tumour Research helps fund an annual £1 million programme of research at its Centre of Excellence at the University of Portsmouth. Further partnerships announced last year with Queen Mary University London, and Imperial College, plus Plymouth University will pave the way for a £20 million investment in brain tumour research over the next five years.

Fundraising in its own right, Brain Tumour Research is also an umbrella charity, working in collaboration with Member Charities around the UK. Together with this network and supported by the fundraising achievements of our Umbrella Groups and fundraisers across the UK, some £4 million was raised in 2014 to fund both brain tumour research and to provide support for patients and families. We are striving to fund a network of seven dedicated research centres whilst challenging the government and larger cancer charities to invest more in brain tumour research. Help us fund the fight. Together we will find a cure.

Further information can be found at Braintumourresearch.org