Sharp writing, as good as any you'd find in Crims or Bad Education. I defy you not to laugh.

This piece, written by City of London School 6th Form students Leo Reich and Adam Husain, will transfer to the Edinburgh Fringe in August. 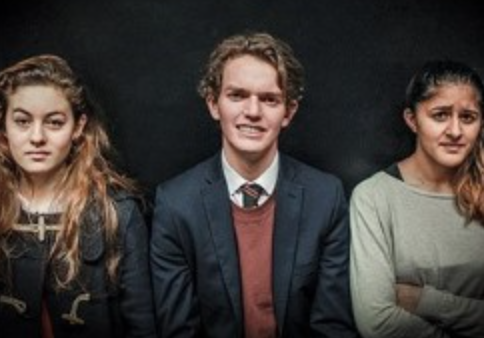 Heads is about exploitation. And one almost feels that so in the school playground, so in the adult world of work.  Andrew and Cordelia have just been appointed Head Boy and Head Girl of their public school. She is a high achiever driven by a lack of parental love to succeed at all costs. He is a slacker, who just wants an easy time of it, content to pontificate rather than be stirred into real action. Everything changes when the two uncover an affair between fellow student Izzy and  a teacher- they cannot resist the temptation to befriend Izzy and write up the scandal in the hope of winning a journalistic competition

The two writers and directors wrote in their introductory synopsis that ‘Heads is a fast paced satirical take down of private education, the press and the emergent culture of competition.’ And it certainly feels of its time with the writing from the two boys as sharp as any primetime sitcom such as Bad Education, Bluestone 42, Crims or even Rev.  Neither does the production shirk the spotlight by using FX or snazzy stage design. The creative team opt for a bare stage, adorned by a few chairs, minimal SFX- leaving just the actors and the audience to face each other in this 60 minute farce. And we are in the time where there is much ranting and raving about the school you went to if you are seen to be successful- particularly in the arts. Chris Byrant’s recent name checking is a prime example. It is refreshing that the drama can laugh at the public school sector, a bit of biting at the hand that feeds, one thinks. But we are also far more attuned to child abuse and pedophile cases in schools, and, as illustrated by Great Britain recently, the almost always detrimental impact the media can have on our lives. And on the lives of the more helpless, the powerless.

The refreshing detail about Heads is that it is written by students about students and is, first and foremost, for students. All around me, school pupils in the audience were laughing, along with a few adults as well. But the impact is to give rightful innocence to Izzy, played winsomely by Anoushka Kohli. Here we are given a portrait of someone abused and exploited- but not just by the adults, but by the children too. Izzy, on the brink of womanhood, believes she is in love, and behaves with the maturity of someone experiencing something adult- albeit  adulterous- but we are not asked to see that she is being abused. The question, underneath all the wit and humour, is is this real abuse? Or is it a real adult love? Where are the lines drawn? We do not know so easily.

The second impact concerns Andrew and Cordelia, who behave like 20 something adults with a distinct lack of life experience rather than 17 year olds on the cusp of their exams and university. They have a certain cruelty that is beyond their years that is born out of our current culture- it is almost as if they are the missing adults in this piece. And deftly the two writer/directors pursue their satirical take on the media by making sure that they support Cordelia and her exploitative actions even in view of the tragic events that follow as a result, rather than condemning it.  And that says it all about this world.

Aside from some clever puns and a talent for slapstick, we are encouraged to have some empathy for Andrew, played with panache by Tom Mackie. He at least struggles with his moral compass a bit. At times there is sunlight for Cordelia, no matter how brief- Ruby Ashbourne-Serkis is very good at showing us the tiniest of cracks that cross her hard shell like little varicose veins.

Who wins in Heads? It’s a bleak and critical satire of worlds we know only too well and hear about all too often- the difference, though, is that we are hearing students’ perspectives and we need more of that.

Go and see it in Edinburgh. I defy you not to laugh. And then wonder why you are laughing.

Heads will run at Edinburgh Fringe from 17th-22nd August at The Space, at Surgeons Hall. They need to raise £7,000 to go, you can help here