What is forgiveness? This play will challenge, provoke, disturb and lead you into great darkness and back again.

“Serial killing? A forgivable act?.. the differences between crimes of evil and crimes of illness”. So proclaims Dr Agnetha Gottmundsdottir, a ‘psychiatric’ explorer of a metaphorical Arctic wilderness who has come to England to examine Ralph, a serial killer and abuser of little girls and test drive her theory that such killers are ill- rather than being particularly evil- and suffer frontal lobe disfunction, an illness that prevents the brain from functioning properly and adhering to moral universal laws. In Bryony Lavery’s play, directed by Ian Brown, we focus on three characters- Nancy, whose 10 year old daughter Rhona becomes one of Ralph’s many victims, Ralph In Wantage as he proceeds from being pedophile on the loose to eternal resident inmate of Long Larton Maximum Security Prison and Agnetha, fresh from tragedy in the US which bring on instances of her own trauma and  panic attacks. 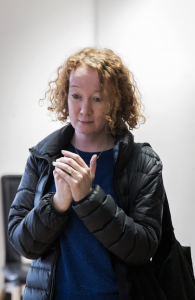 The play Frozen refers in particular however, to Salvaging the Sacred written by Marian Partington, sister of Lucy Partington, victim of Fred West and whose remains were not found for 20 years. Marian Partington in particular writes that “It is very difficult to find the words or an image to describe the pain and disorientation of one’s sister simply disappearing without trace, for 20 years. It is a bit like trying to search for a body that is trapped somewhere beneath the frozen Arctic ocean, as the freeze continues and the ice thickens and there is no sign of a thaw, no sign of a seal hole.” She then goes onto describe what happened to her own life, frozen in time, ‘disconnected from the past’ and ‘disabled by the future’. Although the title for the play was conceived before Bryony Lavery read Marian Partington’s pamphlet, the scene where Ingrid, Nancy’s remaining daughter, says goodbye to what is left of Rhona, draws parallels with Marian Partington’s own experience of burying and accounting for her own sister’s remains.

Thus the play draws on real experience and psychiatric research but manages to pull off a great sense of catharsis, rather than a dry lecture. And Frozen is not just metaphor for Nancy ( Sally Grey convinces us she is a woman who tries to forgive but challenges our very notion of what that is- she does forgive Ralph, yet she cannot stop the outpouring of anger, the joy she feels at the end of the play) or her surviving daughter Ingrid. It is also a metaphor for Agnetha- who at one point laments that although she is an explorer of the ‘Arctic’, what happens when one gets back “and you’re freezing yourself, you’ve got snow in your head”? In fact, we realise, the play is about these three people who are directly affected by tragedy. Their own and that caused by others. Nancy’s tragedy is already beginning before Rhona is snatched- her own marriage is breaking up and the child going missing only sustains the time for the break to take place. Agnetha is in love with her psychiatrist partner David. And the distress of what happens to him shuts her down. And Ralph’s tragedy, which becomes all too apparent, is that he never experienced love in the first place, and has been forever shut down. Cliched perhaps, simplistic yes, but also true. Ironically it is only when Nancy comes to forgive Ralph that he can open up- his brain is re wired? through a supposed act of love which is forgiveness? It is the opposite perhaps of what Nancy wants and Oscar Wilde quotes ‘Always forgive your enemies, nothing annoys them quite as much’. Well, Ralph is not annoyed, he is actually freed from his frozenness into feeling, and as we all know, when hands have been cold for a long time and the blood runs in them again, they begin to hurt terribly. And Ralph hurts, which is his salvation.

In fact, in this production, the sense of hurt is palpable. Sally Grey, Mark Rose and Helen Schlesinger all dazzle with an intensity that increases notch by notch as Lavery brings the three of them ever closer together in a triangle of tragedy. Mark Rose’s Ralph is a conundrum, his is a scary character, someone you cannot trust. Yet Mark Rose gets across the real sense of aloneness, isolation and terrible darkness that comes with not being loved, even if Ralph cannot analyse it this way himself.  In fact, Ralph’s real tragedy is to not realise that this is what is wrong with him. And it is always those who need love the most that never get it.  Sally Grey as Nancy seethes hurt, anger alternating with a forgiveness she does not feel but knows she must enact. Agnetha feels the most lost. Helen Schlesinger gives a remarkable portrait of a woman whose job consumes her, whose morals and faiths in life could destroy her- she is driven by a love that is yet to be personally tested. Liam Tims as the Guard, is excellent as the mute voice of the law, silenced and watchful as Agnetha goes about her work .

The question here though, which is never fully brought out, never fully voiced or answered completely- is whether Ralph is actually evil. If evil exists. You have to know which side of the fence you sit on here. Like Agnetha, I don’t believe people are born evil or become it. I can believe that evil acts are perpetuated. But not that people are evil. Like Ray Wyre in his book The Murder of Childhood, which formed a huge part of Bryony Lavery’s research, I believe that “even in the people who are hated by society, there is a good person lurking in there somewhere”.

There is not a discussion of what evil is- whether it is as transient and as flirtatious as love and forgiveness and therefore not sustainable (the act of love is unsustainable, just as is the act of killing and abusing) or whether it is some horrid, dark immobile thing that does not move, like ice itself. I think the former. All ice thaws, as we see and somewhere, somehow ‘the cycle of abuse must be broken’  by someone, as producing Blueprint Theatre Company believes.

Frozen still is as contentious now as it was when it was first performed in 1998. Now though, we can go further, now we live in a world quickly realising that child abuse has been around us and ignored for a long time. What would happen if the offender was so rehabilitated he was allowed back into the community and as a reformed man, became a champion of good works? A different person others now had to accept as being good? This would also now be the contention. Another leap forward for human evolution.

Complex, challenging and disturbing, Frozen continues at the Park Theatre until 11th April