Review of: Boy in Darkness

A bizarre fairytale, performed by a talented actor 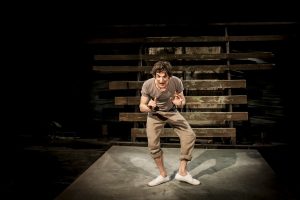 Gareth Murphy in Boy in Darkness

Mervyn Peake, eh? What a weird guy. Boy in Darkness  is a novella that Peake wrote in his later life; supposedly it’s linked to the Gormenghast trilogy – though Gormenghast is never actually referenced in this text. In the book “the boy” heads out of his castle into the nightmarish forest beyond, where he meets a goat and a hyena who serve a demonic lamb, who lives underground.

It is a baffling, eerie text – possibly too dark for children and too formless for adults – so I was surprised to hear of Blue Elephant Theatre in Camberwell producing a theatrical adaptation this week.

It’s performed as a one-man show by Gareth Murphy, a lithe, scrawny scrap of a fellow with a bouncy mop of brown curls and some incredible cheekbones. He – and the director John Walton – certainly pull the best out of the text: Murphy is engaging as the narrator, endearing as the boy, and takes great relish in the monstrosity of the animal characters. He climbs monkey-like around the edges of the stage and makes full use of the rickety climbing-frame set. He is, in short, a great performer: captivating and emotive – and one clearly up to the challenge of a one-man show.

Why three stars then? Frankly, Peake’s novella is the weak link here. For me, it lacks the requisite components to make a striking one-person show. Firstly, it’s strangely lacking in drama. Much of the show is taken up with two animals bickering. The bad guy is a lamb – and if Murphy fails at anything he perhaps fails at imparting to us how scary this lamb is. Certainly he’s a very creepy lamb. But why is the bad guy a lamb? A critique of Christianity maybe?

Secondly, for a fantasy, it’s not really that magical – we don’t really find out why any of these characters are enchanted. Also, there aren’t enough characters for Murphy to play with! Having a goat argue with a hyena for much of the show – regardless of the actor’s skill – is inevitably a little tedious at times.

Kudos is due to Murphy and the director John Walton for bringing this text to life in an exciting and engaging way. Peake fans will love you for it. The rest of us will be wondering what he was smoking at the time.