Review of: A Breakfast of Eels

Beautiful. Sparse. Full of complexity and kindness. You should leave the theatre emotionally exhausted and yet on a high.

Robert Holman’s new play is about love. Though the two men in it barely touch. It’s about the love between friends, it’s about fatherly love, brotherly love. Perhaps it borders on the physical and the sexual. But we don’t know and don’t care. Because it is a love which acts, a love which lasts and is everlasting. It has no need to define itself, the one definition of true love. 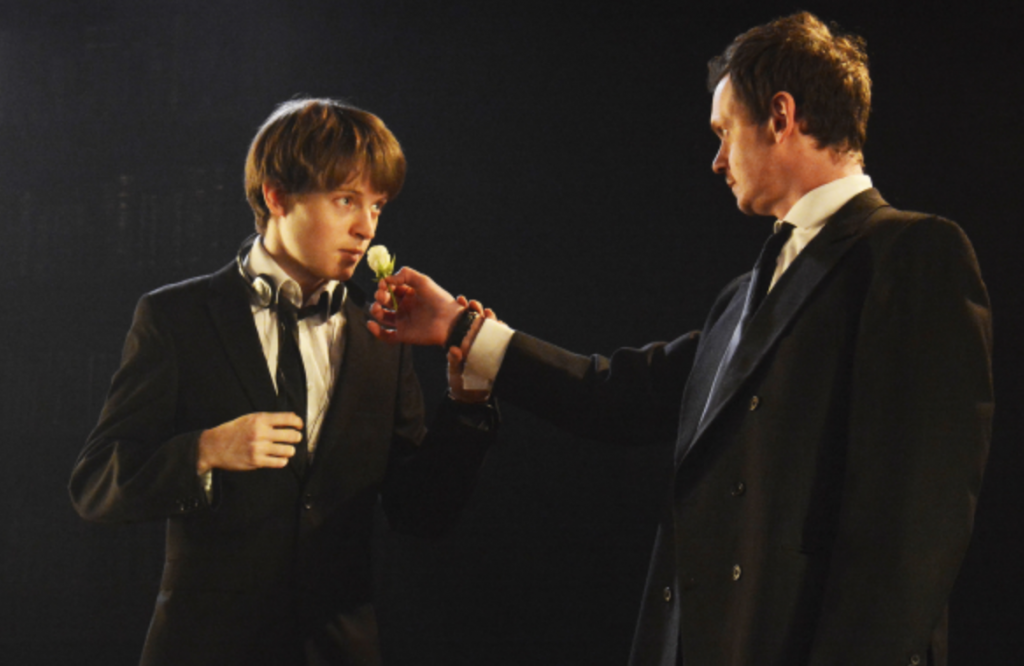 Robert Holman’s new play is also about loss. Loss of many things. Loss of father, loss of mother. Loss of sister. Loss of childhood. And it is about founds. Found friendship, found memories. Found feelings, found depression, found trauma.

The two men in it are Penrose, at the beginning all of 21 and Francis, 35. Brought up together in the same household in London and mourning the death of the same ‘daddy’ we realise they are not blood brothers and Francis hides a past he clings onto like a limpet on a rock. Over the next two hours and years, Penrose tries to prise him off that lonely rock and we watch as the two men draw closer, the younger man the seemingly more innocent and confused of the two, draw apart, draw close again, until at the end of the 5th act, years later, we reach the final moment of extreme Pathos. During the course of this we travel to Northumberland, learn how to make a simple bow and arrow, exalt at rain storms, Penrose sings Gluck and plays the piano on Ben Stones’ bare stage and through Nicholas Holdridge’s ethereal light. Along with the bird song and the holy silence created by George Dennis, Robert Hastie’s production is almost sacred, almost ecclesiastical in feel.

This is my first Robert Holman play. As (apparently) his work is not staged as often as it should be, I hope not my last. Or anyone’s last. Why this is so is not understandable. If there is ever a living playwright who bathes his characters in and with humanity and understanding, it is him. If there is ever a living playwright who can grasp the thorn whilst smiling at the rose, it is him. This work is symphonic in structure, motifs repeat in varied and extended form, they mirror, shift almost in an ABAB pattern, boom in your mind until you find yourself at 2am in the morning going ahah!

Simon Stephens wrote in an article about the same playwright, that when we write about theatre we pretend we are objective when the only thing we can be is subjective. He is right. When I read some responses from others it feels as if I am from a different planet, my thoughts could not be more different. For me, A Breakfast of Eels is not a play where two men are trying to make love happen- or if it is, they do not see, perhaps tragically, that it is already happening, that this is love. It is a play which charts how that love happens, how it takes place between two people who are simply dealing with trying to live in the world. That is all. The simplest of plots and yet, could it get more complicated?  Both men, as disinterested in subtext they and the playwright is, think they know themselves, but ultimately find, and we find, that they do not. This is life. And the ironies of life in this play are aplenty, and they are the little ironies in life that also hurt the most.

Robert Hastie directs with a light touch and allows the play and the actors to find their own pace. Classical music pieces allow both characters to simply express deeper feelings or provide moments for redemption. The creatives, working from their palette of light, sound and texture, create visual images that make you think that this is what an Arseny Tarkovsky poem would look like on stage. Continually, I had in mind Ingmar Bergman also. Simon Stephens has already previously mentioned Terence Davies. And you think, as an audience member, you’ve finally grasped the snow, only of course, to find it melting in your hand.

The two hander was written specifically for these actors. Andrew Sheridan as Francis is like a still promontory, booming the echoes of childhood memories as Penrose swirls around him like a tempestuous sea. He is closed by trauma, he can only ‘live one day to the next’ almost in a form of frozen asexuality. He is the heart to Penrose’ head.

Matthew Tennyson as Penrose, juxtaposes a kind of youthful exuberance which could also be translated as sometimes slight unintended cruelty with his constant chatter, with an almost indefinable soprano choir boy voice and sincere feelings of love and wanting to love and be loved.

Beautiful. Sparse. Full of complexity and kindness, you should leave the theatre emotionally exhausted and yet on a high.