Review of: Unborn in America

the referrentialism is entirely Quentin Tarantino

The piece could be seen as a reactionary cabaret opera, flailing against or amidst the flying detritus of a post neo liberal Regan and Clinton administration, where American life, in all its infantile forms, is celebrated through a mass of popular culture icons, artists and daytime TV chat shows. It is about life, not death or the dead and that life is a “shitty” one. It’s a satire about an assault, about an assault on a life not yet lived and never will be, an assault on an aborted fetus, whose meteoric rise from the lowly depths of The Petri Dish cabaret bar, visiting a dysfunctional white trash mother along the way to a term in the Oval Office, is brought down by the realities of our booming abhorrent internet market realities. 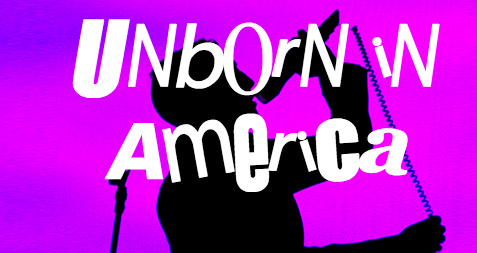 But it’s a rare thing, as the premise is built around something that does not exist and is therefore already negated. And something odd happens as we travel with Jessica Walker’s Unborn in America ‘Ziggy’- we experience, through the narrative- a second negation- a negation of a negation that didn’t exist in the first place.

This serves as an apt metaphor the non being that must be a fetus. So it’s clever.

And the experience of watching and listening also does something else. It curiously reminds the audience of their aloneness, of not having a home- or in this case, a safe stylistic one. It does this by contrast. The bluesy type cabaret music composed by Luke Styles, coupled with an intentionally gimmicky libretto by director Peter Cant [minus the violence, the referrentialism is entirely Quentin Tarantino] provides a conflict between a nostalgia for a Kurt Weillian epoch whose artistic works served a socially useful purpose, with a more brazen, infantile and yet depraved world Ziggy eventually finds herself in.

We are given no clues by either the director or the composer as to how to navigate this world and therefore, we cannot avoid or evade the work either. We are made to think. Not just about America’s anti anything attitudes and its reliance on a certain kind of cultural trash, but about art itself and opera’s very own cultural shifts.

What is the message when Ziggy returns to the safety of The Petri Dish? There are many laughs to be had here, and perhaps the biggest, one may feel, is at opera itself and its often self styled Anna Nicole ism.

This is an OperaUpClose Ensemble Amorpha production.