Review of: The Mikvah Project

A circular swimming pool. Or a collection of water. Or a Sauna. Or in Judaism- Mikvah- a pool of cleansing water- it could be the ocean or a lake, used for ritual immersion.  The round pool, our only stage, designed by Cécile Trémoliéres, serves all these purposes. The reflections on the wall from the ripples in the water from Joshua Pharo’s light, are as detailed as any in David Hockney’s swimming pool series. Yet the light is holy, we start thinking Bill Viola’s Dissolution or his current exhibition at St Paul’s- Martyrs  (Earth, Air, Fire, Water). This before the play, by Josh Azouz, has even begun. 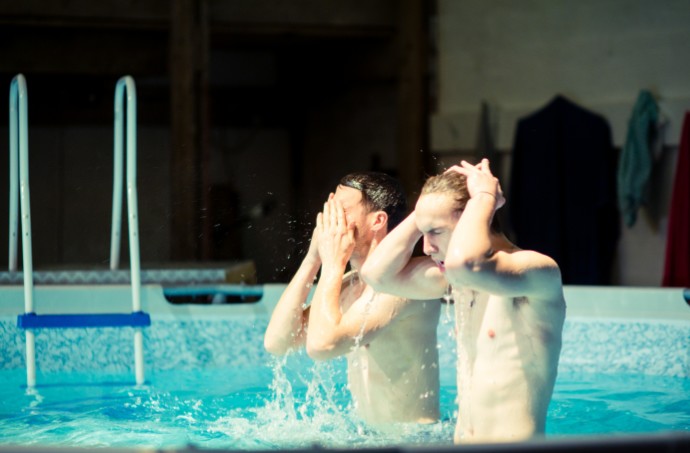 But then the mystical spiritual sense of Kavanah (mindfulness) is broken by the entrance of Eitan, a young man. He has come to immerse before the Shabbat. Or is there another reason, as he wanders  around the pool’s edge, repressed energy coiled up in him which at first, can only be released by the side throw of his body into the waiting water? His name means strong flowing. One wanders why he is bathing in static water, especially when he does not believe in Hashem.

Enter older Avi. Avi means the father, but here this Avi is striving to be one, to conceive a child with his wife. He too has come to immerse ‘so my sperm can become better swimmers’.

As Eitan and Avi talk, as they watch each other’s naked bodies in a ritual that is more  for women at the end of their menstrual cycle, they tell each other stories, talking down microphones as if standing on a Bimah and to the background of Nigunim (Jewish Religious song composed by Ezra Burke) hauntingly remixed live by sound designer Josh Grigg. And we start to wonder what is real as the narrative voice slips between first and third person, as the theatricality of the Jewish Song and Story Telling tradition becomes meta theatre, role play, improvisation and fantasy.

As he falls in love with Avi, is Eitan really gay or is he going through- as Avi tries to persuade him- a phase? Yet Avi returns his feelings. Or does he? Is it just friendship for him, even fatherly feelings that wish to find expression in a physical manner? But Torah law forbids homosexuality, Leviticus, the same inspiration for The Mikvah rituals, declares it an abomination. Yet the Torah also forbids judgement, it forbids homophobia. Is Eitan coming to cleanse himself before Shabbat? Or, is it for him a rite of passage, a transition where he will embrace his sexuality and reject Hashem? The Jewish position on homosexuality is still a difficult and convoluted one for many liberal Jews and those who wish to follow the Orthodox tradition- Avi is an adequate expression of this. We never feel he fully reconciles with himself his affair with Eitan, and we are shown by playwright Josh Azouz, that the same forces that pull him away from Eitan- his wife, Jewish Tradition, the Brit Milah, Jewish thought in other words, are the very same things that will also redeem him.

This is a problematic play. It struggles to deal with Jewish thought about homosexuality, to deal with first love, to deal with sex between two men, to deal with, ultimately, unrequited love that becomes so because it is necessary through moral law and the Torah- one may have feelings, but one makes a choice whether to act upon those feelings or not and thus what sort of moral compass one should follow. The play struggles and wins, not because it is trying to find an answer for Eitan or give him what he wants. Not because it tries to make the decision for Avi easy. But because it paints a picture of how it is in real life. Some things just cannot be- or rather, we feel here, we don’t always get what we want but we might get what we need, however unseen or unwelcome. For Avi, his journey by the play’s conclusion, is much clearer than Eitan’s. Yet we feel somehow that the journey and its rite of passage, is far more important and character building for Eitan, than winning Avi.

Because of this, the play and the production are Talmudic in sense. We, the audience, feel we have learned by the end of this, we have been instructed in something.

The Mikvah Project is Jay Miller’s debut at The Yard and what a magical transcendental one it is. Josh Azouz’s writing is like the the cup in Psalm 23- whilst tackling difficult issues it overflows with love nevertheless. Oliver Coopersmith (C4’s Scrotal Recall) gives an edgy, melancholic and intelligent performance as young, confused, belligerent and irreverent Eitan. Jonah Russell (Young Vic’s A View from the Bridge) gives us an Avi who is trying so hard it flows out of every pore- he effortlessly transitions between a man happily caught up in a love affair and a deeply religious one in love with his wife. Music and sound from Ezra Burke and Josh Grigg steep the play in the Jewish Tradition and Joshua Pharo’s light, constantly reminding us of those moving ripples on the water’s surface, is expressionistic of a universal kindness, of ritual, of cleansing.

Sexy, sad and holy The Mikvah Project continues at The Yard until 14th March