Review of: The Eradication of Schizophrenia in Western Lapland

A taut and interesting theatrical experiment. 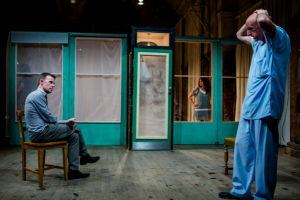 The Eradication of Schizophrenia in Western Lapland at BAC

Schizophrenia. Voices in your head. Madness.

The new show from Ridiculusmus, The Eradication of Schizophrenia in Western Lapland, explores the treatment of Schizophrenia by making the audience feel like they have it. They split the audience in two, each one watching one half of the stage. Two simultaneous scenes occur – linked, but not the same. Actors switch between the sides and take on different roles in each.
“There’s a method of treatment that has virtually eradicated schizophrenia in…” says the therapist.
“…Western Lapland?” says Richard.
“How do you know that?”
“It’s the name of the play we’re in.”
So far, so clever. The theory the company are demonstrating seems to be that validation is given to schizophrenics’ “meaning making” – whatever that meaning making is – allowing them to develop their personal relation skills and become less…psychotic, I suppose.
Jon Haynes gives an intense, nervy performance as Richard, talking to his “doctor” about the play he’s created about schizophrenia. His dysfunctional family occupy one half of the stage, the therapists’ office the other. The dialogue intermingles, synching and un-synching, creating the powerfully unnerving sensation of having voices in one’s head.
At the centre of it all is Richard, shuddering and worrying. Trying to deal with his “crazy” mother and disaffected brother. The doctor is also his father, who can hear his other wife downstairs. It’s about as complex and confusing as it sounds.
Eradication… is a worthy theatrical experiment. It’s initially very confusing, and the confusion doesn’t let up for quite a while. Its commitment to the disorientation of the audience is fairly brutal to start with, and you can sense the relief in the second half when the pieces start to come together.
Creating a piece to demonstrate schizophenics’ meaning-making is a fascinating idea, and this is an interesting attempt at bringing that to the stage. And while this show will frustrate a lot of people, it has a lot to offer to those interested in experimental theatre.
The show continues at BAC until 14th February