'a balm for the sores of existence'

Ritual lies at the heart of Samuel Beckett’s Happy Days. Coming to the theatre to watch such a production as currently on at the Young Vic, is also a ritual. An irony Beckett must have been aware of, perhaps alluded to in his characters Mr & Mrs Shower (or Cooker). 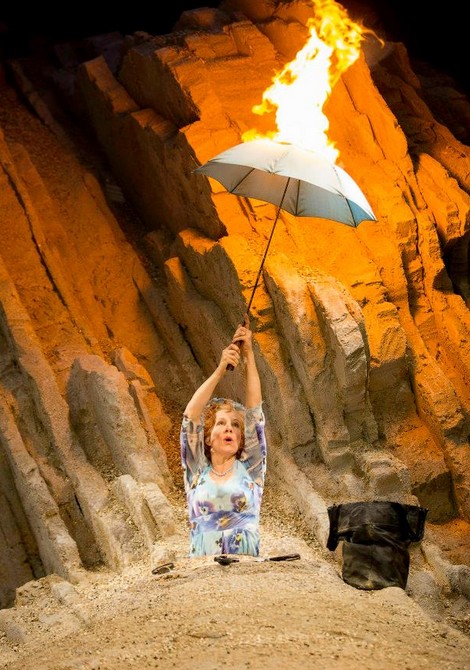 In this production, where the characters remain almost totally still in their allotted hideouts- Winnie buried first up to her waist and then, in the second act, up to her neck in Mother Earth on Vicki Mortimer’s stage, wearing it as if a robe, Juliet Stevenson and David Beames as Winnie and Willie, would not be out of place in Think of England, a TV documentary by chronicler of our modern age and photojournalist Martin Parr.

Because Happy Days creates a specific visual image- or series of them onstage- that juxtapose with the more universal themes and ”the combination of the mysteries and the factual, the strange and the practical” even though nothing much happens.

Floods of images come to us through mostly Winnie’s words- stories that take place elsewhere and inhabit a different space- and Willie reading out, with glee, the job adverts or death notices, a recollection of the brief passing by of Mr and Mrs Shower (or Cooker)- derived from the German ”schauen’ and ‘gucken”, to look- reminding the audience of their voyeurism or that we are indeed, them. Onstage, Winnie’s parasol catches fire, she hums tunes from Franz Lehar’s The Merry Widow, to go with the semi rakish Willie.

Tom Gibbons’ sound are the electric shocks to wake up the audience in a collective shudder. That and the scree falling on Winnie, gives us a sense of continual torture.

Paule Constable’s hard nonfluctuating bright light is a metaphor for what Winnie sees all too well- her painfully diminishing existence which is slowly being swallowed up by the ground. Not for her ”old age should burn and rave at close of day” or is it? Is there a redemptive feel to Natalie Abrahami’s production?

Compare with Blasted (Sarah Kane) which I saw straight after Happy Days at the Crucible, Sheffield. That play, though borrowing from Beckett’s Waiting For Godot, features another character up to his neck in it- this time journalist hack Ian, who sits, water pouring onto his head (not scree) in a hole. The struggle between him and the young the girl he abuses to stay together, mirrors the struggle between Winnie and Willie- whom, though seeming not to be able to be with each other- yet, also, can be. As we see they are together and must be so, even if Willie’s last act is ambiguous. As in Blasted, as here, the relationship, the situation is strangely cleansing, strangely redemptive- think Gloucester in King Lear or more so with Winnie, Lear raging in his den on the common.

Juliet Stevenson is like the bird Beckett intended the character to be, one who, despite being weighted down by the earth, brings an optimistic lightness that makes it seem she may float and take flight at any moment. David Beames, is tortoise like, scuttling back and forth in his hole with quiet desperation and instability, constantly alluded to by the presence of the gun Winnie must protect him from.

The production is not a means by which to try and convey ‘meaning’ necessarily but is a ‘balm for the sores of existence’. As illustrated by the piece’s final song- ‘I love you so’ from The Merry Widow.

Happy Days continues at the Young Vic until 21st March