New, new directors. It’s not often I get to see plays by them unless I attend- very rarely- a graduate show, or a full length show by someone talented and new- but such shows critics are asked not to review in order to take some pressure away from a first time director (quite rightly) – although often they scream to be written about because mostly they are very good (thank God and give some hope) and teeming with flare and drive,  so igniting in the passionate writer a similar need to write and relieve oneself of the sometimes intense and engaged experience watching the show excites.

Luckily Gobstoppers, Stonecrab’s Young Directors Festival in association with the Albany, lets their very new and very young (often though not always)  directors take on one act plays- and in this case, I am allowed to write about them.

And like the festival of new writing I attended at Amersham Arms by Encompass Productions the other night, I found myself in safe hands. I found myself not having to wade through oceans of meaning to try and understand what in the world was going on. Nope, Gobstoppers lets- or forces- their directors to just direct. 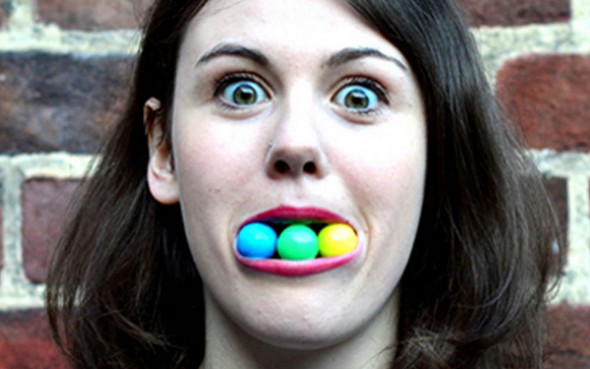 Saturday’s offering, the night I attended, presented the audience with three plays by well known playwrights who are also excellent craftsmen/ women.

Being Norwegian by David Greig, originally a radio play, was simply directed by Jennifer Iswara, who coaxed some first rate performances out of actors Olivia Bromley as Lisa and Ricki Chamberlain as Sean. A simple set gave a simple vignette of what life is like for these two loners, whose mental instabilities are as precarious as the height of the tower-block they inhabit, and who slowly reveal, over a 1o year old bottle of wine, initially an appetizer for a one night stand in Sean’s flat, the inner troubles that motivate their outer behavioral tics. If the casting’s right half the battle is won I always say (and indeed know) and so here- there was great chemistry between both actors – and perfectly rhythmic scenes to match the ups and downs of the stumbling foreplay, both actors returning to weighty silences as they hesitantly sized each other up, their expectations and thoughts of the other in continual assessment and reassessment.  A difficult play- naturalistic where the director cannot be saved by gimmicky scene changes, music or swaps in narrative voice- but Jennifer Iswara seems a natural heir to such plays. How would she be directing Chekhov I wonder? Or grappling with Tennessee Williams? From the talent on show here, I think she would relish the challenge.

Random by debbie tucker green was directed by Kwaku Kyei. At its premiere at the Royal Court, the monologue was performed by Nadine Marhsall. Here though Kwaku Kyei makes a bold directing choice and gives us Chinwe Nwokolo and Sophie Mercell, who equally split  roles as they take on the narrator’s voice, in this elliptical domestic tragedy. But there is nothing to say the four intertwined monologues cannot be performed by more than one person  and the separation of the roles adds depth  as, against the jumps  in time and place, actors are frozen, awaiting to play their turn in what seems like an almost ‘random’ distribution of lines.  Each actress, on fire in this production, is ablaze with passion and understanding, yet each brings a slightly different interpretation and tone to each character- Chinwe Nwokolo is colder, more considered and precise and wonderful as the traumatized mother set apart from her remaining daughter and husband. Sophie Marcell is the fire, in yer’ face as Junior, the one for whom strangeness felt in the morning will end his life; as the daughter she is  outraged, estranged, alone. A brilliant production with the actors and director relishing debbie tucker green’s vivid poetical gift for language, a genius touch to get us to see the events through the eyes of two young women, rather than one older one. Very confidently directed.

Collected Stories by Donald Margulies, directed by Sian Davila, ended the evening in a lighter tone, the less exuberant of Margulies’ works more a play of manners exploring morals and artistic endeavors as Professor Ruth Steiner (Maggie Robson) decides to mentor student writer Lisa (Amelia Clay) – we then follow the ups and downs of their relationship, which becomes a form of love, as Lisa becomes famous and Ruth diminishes somewhat on the sidelines. But make no doubt, although the roles are almost equal and the overriding themes centered around writing and artistic responsibility, the play belongs really to Ruth and is a portrait of a woman who visibly ages and loses her memories and her heart to the girl who should have been her daughter. Maggie Robson is dryly frozen into Ruth- all her emotions are conveyed through her searing ironical and slightly coldly amused looks, she conveys her hidden sensuality through carefully crossed legs – the perfect portrait of a once hot new writer now shelved as a has been and member of the establishment. Again, great casting pulls off great chemistry – Amelia Clay’s Lisa is faltering and shy in the first scene, as she hesitantly makes her acquaintance with Ruth- but by the last she is tall and commanding, revealing an ingenuousness  along the way that prepares the audience for their perhaps ultimate conclusion of her- that she is after all, self seeking, egotistical, hard.. she is as much on the ascent as Ruth is on the descent. Sian Davila’s production scorches the audience with its misleading portrayal of warmth, writing and tea in a genteel West Village- we are left with a broken woman on her own in a house, all her distant demeanor destroyed as she is left to face- perhaps- death alone.

3 plays, 3 talented directors and 6 talented actors.  All of the directors were able to expose the psychology of the work. All produced simple images that conveyed metaphorical meaning. They might be new but along with the other production by a new director which I cannot name, they are the faces of our new directing talent- and that collective face looks bright, it looks alert, it looks assured and with a gift for exploring theatre’s capabilities, the extremes to which it can go. And theatre in the UK and in London particularly, needs this. We need some reinvention and some new voices.

What can these directors do now? What will they do? Let’s wait and see.

Verdict- sophisticated directing and story telling alongside a group of 6 actors who are also ones to watch.

Gobstoppers was a week long festival showcasing work by different directors each night. More information about Gobstoppers can be found here.