King Lear, Ibsen’s classical narrative structure, Beckett’s Waiting for Godot; throw in some Brecht- all, by the writer’s admission, influences on Blasted– thematically, structurally, visually. In fact this is what makes a Sarah Kane play such an exciting event. Each of her 5 works ‘blast’ form out of the window and asks us to review, time over, what theatre is. What it can be. What it should be. 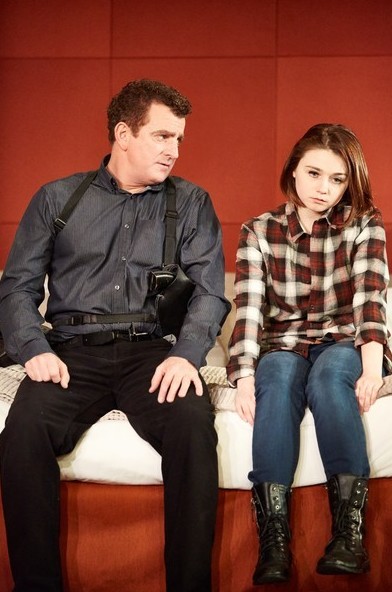 Richard Wilson’s Blasted, Sarah Kane’s first play and marking the 2oth Anniversary of when it was first performed, elongates out with all the smoothness of a Edward Hopper painting, such is its expressionism through the 5 anti –three- act -structure scenes and not just in the 5th, as was Sarah Kane’s intention. We see young Cate (played with a world weary languidness by Jessica Barden which betrays her true innocence) as a laughing Cassandra resembling more- as Matt Trueman so wonderfully puts it- a jack in the box- whose seemingly intellectual simplicity holds a menacing knife like edge, like Mouchette in Robert Bresson’s film of the same name. The scornful laughter, the hurt, sometimes vacant looks from Cate, are the outward signs of a young girl – so young here she could have stepped out of Andrea Dunbar’s Rita, Sue and Bob too, though she has a deeper innocence- who is systematically ‘gently’ groomed and abused by older wannabe boyfriend tabloid journalist Ian (played with halting covert brutality by Martin Marquez) in a hotel room in Leeds which, from James Cotterill’s design, could come from a scene in Steve McQueen’s Shame.

The glass sides of the room, as is inferred and as we imagine them to be and see ourselves reflected in in the scene breaks punctuated by flashing lights (as if a metaphor for the mystical pronunciations Cate sometimes comes out with) reminds us of film. And it’s as though this dynamic has been purposefully set up- a passive audience, spectators at a sport (perhaps a football match? Minus the terrace commentary) where we the audience are merely voyeurs, unable, as Sarah Kane so often loved about live theatre and said of, ‘to cough in the dark’ in order to change the nature of things, to give a dramatic punctuation mark to a live moment even. As the terrible events happen on stage, we experience our own powerlessness.

Throughout watching this production through a half glass box, we are reminded of an exhibit- Sarah Kane’s love of rhythm is replaced by strange awkward exchanges between Ian and Cate, the stutters which themselves are stuttering, fracture the dynamic of the first two scenes which are classical in form and meant to be naturalistic. Here they are decidedly anti naturalistic. Thus the entrance of the soldier (Mark Stanley is sombre, war weary and unshakable) – is played down. Gone is any door related humour around the tap tapings Ian and him play out, supposedly mirroring the absurd surrealism in Harold Pinter’s The Dumb Waiter and with it all the menace a closed door can excite in the mind. Instead we have everything played out at arm’s length, as if watching the awful events on the screen of an iphone. The shock ability of the piece is removed. We don’t really see the eye biting ( although we are invited to indulge in the Soldier’s obvious enjoyment at ingestion) the rape is passive, non reactive and Ian defecates in a corner away from prying eyes, like a naughty puppy who fears that the God he does not believe in, is watching him even so. The result is to make all what should be horrific events the opposite. Unhorrific. This does at least two things.

First it allows director Richard Wilson to ‘own’ this production and puts some distance from the shock and awe that surrounded the play when it was first performed, a reaction that Sarah Kane herself hated as it concealed and shrouded the real meanings in Blasted.

Second, it forces a reappraisal of the play in today’s political and social context and brings about an important revelation… the abhorrent acts set out on stage before us are now common place in our media forums and on our TV news programs- the spoils of war, though culturally individual, are none the less photographed and filmed and endlessly distributed across our news agencies, used as propaganda, shared unthinkingly on social media platforms. We are now used to revelation after revelation of covered up child abuse cases. Appallingly so.1995 was another country where the horrors of the Bosnian War so closely on ‘our’ doorstep, shook the foundations of a ‘civilised’ Europe. Now we don’t bat an eyelid and as a result, perhaps some of the parameters regulating what is decent and humane and what is not, have become blurred.

What, some detractors may ask, does this mean for Blasted? If meanings can only come from its atrocious violence? Well, it does something as simple as this- it holds up a mirror and says not ‘this is what is happening out there, wake up!’ but ‘why have we continued to let this happen to such an extent (abuse, in all its torrid forms) that it is now so common place that we are no longer shocked, no longer moved?’

Whilst perhaps choosing to concentrate less on some of Sarah Kane’s structural concerns and styles and even pertinent images, which means that some thematic ideas are buried a little deeper- the religiosity of the piece, Ian’s need for redemption and the redemption he does indeed find, Cate and Ian’s desperate need of each other in a twisted love, and Nationalism-  we are left with something that is perhaps more important- a portrayal of a world where we expect the bomb blast in our real lives, we expect the soldier (terrorist or otherwise) even on our own doorstep in a world that is post 9/11 and 7/7 and infiltrated by Isis. The unshocked unmoved and dogged determination of an ignorant and racist Ian and unworldly Cate harness in order to survive, shows us that we are in a post post apocalyptic landscape that is world weary. We are no longer innocent.

n/b Although this is a long review even by my standards, I have to end with this little appendage and note to the self. I had no idea my thoughts would turn out to be quite so about this production of Blasted until I started writing. In a lot of ways, my immediate feelings were contrary to most reviews. And even writing about it has been almost as pleasurable, even  equal, to the pleasures of watching the production. Which proves Mark Shenton’s theory – ‘often I don’t know what I think about a show until I write about it.’ It’s perhaps the most honest way to write a review. It is certainly the most revealing. And the most honest way to react to Blasted.

Blasted continues at the Crucible Sheffield until 21st February. It is part of the Sarah Kane season which runs at the theatre until 21st March.