Review of: Walking The Tightrope

Go see this while you can

Site-specific set? Perhaps, in the old Guardian offices in Farringdon, Offstage Theatre and Theatre Uncut curate a cycle of 12 short plays exploring the tension[s] between art and politics, reactions to the budget cuts to the arts in the UK and debate freedom of expression controversies. Corruption, class divides, perception, blood money, gesture politics and culpability, it’s all there and recent topical events are given stage time, from The Tricycle’s controversial decision to withdraw their support for the UK Jewish Film Festival to the Barbican’s cancelled Exhibit B. 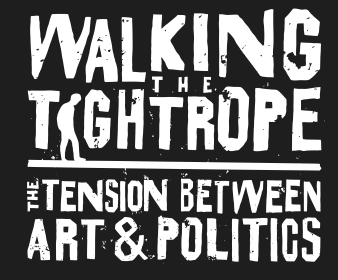 The plays are entertaining- Sun City by April De Angelis, Re: Exhibit by Gbolahan Obisesan, Old Newland by Julie Pascal, Tickets are on Sale Now by Caryl Churchill and Exhibit A, by Neil LaBute, all deserve special mention for looking beyond the parameters of funding and freedom of expression in the UK arts- by which of course, I mean a theatrical London still surfing the very last trickling waves of Colonialism and its accumulating guilt on the one hand, and insular arrogance on the other- and seeking more universal contexts that encompass identity, audience responsibility, perception, ignorance, greed, language subjugation and its co-opting abilities and inherited opinions and memory. For its ability to travel a trajectory which goes both inwards and outwards as it jumps continents, Old Newland especially sticks in the mind, actor Stephen Fewell successfully giving us a sense of the ‘stink of mortality’ in a play exhibiting complex turns of contrapuntal thought and psychological depth.

The real success of the evening though, is its curational configuration, presided over by Cressida Brown, Offstage’s Artistic Director. Each evening the performances are bracketed by a panel discussion [different panelists each night] which allow the plays to be put into context, allows for awkward questions for a not necessarily won over audience, and gives a chance for increased debate. The particular night I was there, the question was put ‘what now? What’s the point of this if you are already preaching to the converted?’ and ‘Aren’t we in danger, if we are promoting this as the status quo, of a return to orthodoxy?’ Clichéd and expected questions perhaps, but none the less pertinent, for, other than the free downloads of the plays that will be made available between 2nd and 9th Feb, what is next? Where can we go from here? Do we all go home and just carry on until the next Walking The Tightrope event? What happens now and how can the conversations be carried on with the audiences and beyond?

The point, as inferred carefully by Belarus Free Theatre’s Artistic Director Natalia Kaliada, is that we do have complete freedom of speech in this country and we are free from dictatorship [although someone in the audience insisted that the UK faced another form of dictatorship, Capitalism] as opposed to Belarus, where to say what you think will most certainly endanger your life. And this brings about a strange observation- that in the UK we seem more moved to ‘discuss’ rather than to ‘debate’- i.e. we prefer to talk and exchange ideas rather than be a little bit more contentious perhaps. Are we then, not really using this human right, but for some, gift, of freedom of speech enough?

This is the real meaning of the evenings of the plays one feels. As Natalia Kaliada described how her theatre company was taking part in Fracking debates in parliament, I will admit to feeling slightly ashamed. Why aren’t I attending these debates I thought, why aren’t I more active in fact- well aware that I am, of BFT’s own increasing activism. For BFT are not afraid to merge their theatre with action, for them the two seem to go hand in hand, they fuse political ideas in art with real life action, proving that the two can go together. I couldn’t help wondering that this is what is next. Theatre companies, playwrights, actors etc taking the debates outside of their inner circles and out into the communities, involving them, spurring them into action in an almost guerrilla like fashion, confronting politicians, attending parliament, lobbying, taking part in pop up protests- not just curating events like the Big Idea such as the Royal Court are doing, good though this is, but actually leaving the theatre and getting out onto the street. Actually doing something, rather than just talking. It is already starting to happen of course, but not quite enough. And perhaps events like these are small steps in the right direction.

Walking The Tightrope, supported by a terrifically dedicated cast and with all plays directed by Cressida Brown, finishes at Theatre Delicatessen Sunday 1st February with a performance at 4pm. Book here.