Review of: The Separation

In art there are two types of representation of chaos- that which remains on the outside, is a little gimmicky and self-referential and ‘does lots of tricks’. And that which is internalized, it is the chaos that gathers storms clouds on the inside when an effort is made by an individual to absorb all that is out there, into the self. 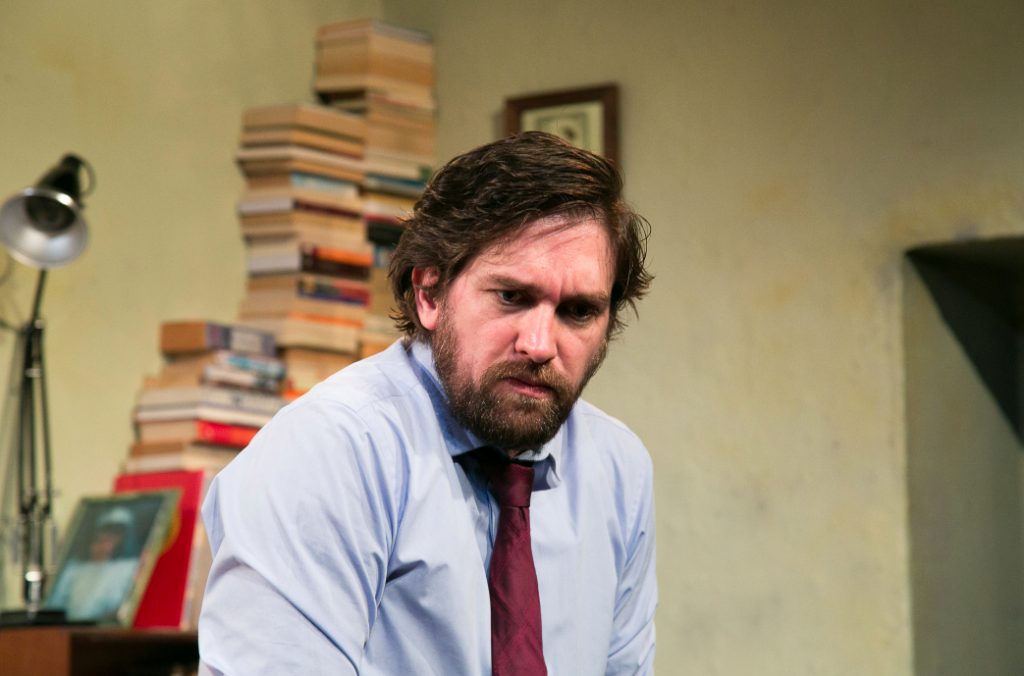 The Separation, a new and first play by Richard Molloy, could exemplify the latter. Stephen Harahan [Owen McDonnell] a sometime journalist, attempts to find love with colleague Molly MacDonald [Susan Stanley] only for the party to be gate crashed by his stricken social worker wife Marion [Carrie Crowley] and their confused daughter, Gertie [Roxanna Nic Laim]; Stephen having laid eyes on neither for more than six months since their separation. Set in 1995, the year that Bill Clinton gave his famous peace rally and the Irish Republic voted in a referendum to legalise divorce [until then the ban was seen as a result of Catholic influence by the Protestants, and as a major threat if Ireland were to be united] we follow Stephen in his Dublin pad as he undergoes a major breakdown, with a good measure of booze thrown into the equation.

‘That’s biblical that is’ Stephen says as he [as it directs in the play script] refers to the never ending Irish rain, although at which point his lover throws out her arms in the shape of a dripping crucifix. Perhaps a trite observation but a fitting gesture by actress and director as a metaphor of sorts for what happens later on.

There are other references to the Catholic Church- is there ‘any institution in the entire world more ignorant on the subject of marriage?’ as well as some slight puns over the characters and their namesakes in James Joyce’s Ulysses, although the writer’s thoughts here are never quite finished- unless you consider the novel’s most famous line ‘history is a nightmare from which I am continually trying to awake’ as being pertinent to the Stephen we encounter in 1995, whose demons surely catch up with him as he struggles to become a ‘pioneer’- a non drinker.

The problem is that the play ends half way through and begins too soon and there’s a good deal of flab in the opening scene. And as soon as we start getting to the nitty gritty its time to go home- before any kind of character arc can be believably established.

Which is a shame, for in Stephen we have an inimitable, chaos internalizing, mad character about whom we just want to know more. But instead we get what feels like half a play with the playwright’s major thematic concerns only thinly sketched and under developed and with the characters hyperbolizing, so that subtext is washed out along with the rain hammering against the window. And it could and should easily be another hour- the material is all there.

Despite this though, it is well directed by Simon Evans and there is some fine character acting from all the cast in a play, which, with some proper development, could be really good.

The Separation continues at Theatre 503 until 21st February