Review of: The Chronicles of Kalki

fast, cool and sharp and hides a warm beating heart

Kalki meaning White Horse or Destroyer of Filth, is the final avatar or incarnation of Vishnu, the sustainer and protector in the Hindu faith. In this play, the second of the Displaced Hindu Gods series by playwright Aditi Brennan Kapil, Kalki is a young Vishnu avatar [Amrita Acharia] who is quite literally, on Madeleine Girling’s thin thunder bolt diagonal stage that represents the panels of a graphic novel or comic book, thrown into the growing pains of two disenfranchised schoolgirl outcasts Angela Terence and Jordan Loughran. When she disappears as suddenly as she arrives after a male school pupil is assaulted in a revenge attack, the two girls are interrogated by cop Trevor Michael Georges, which allows the story to be told in flashbacks. 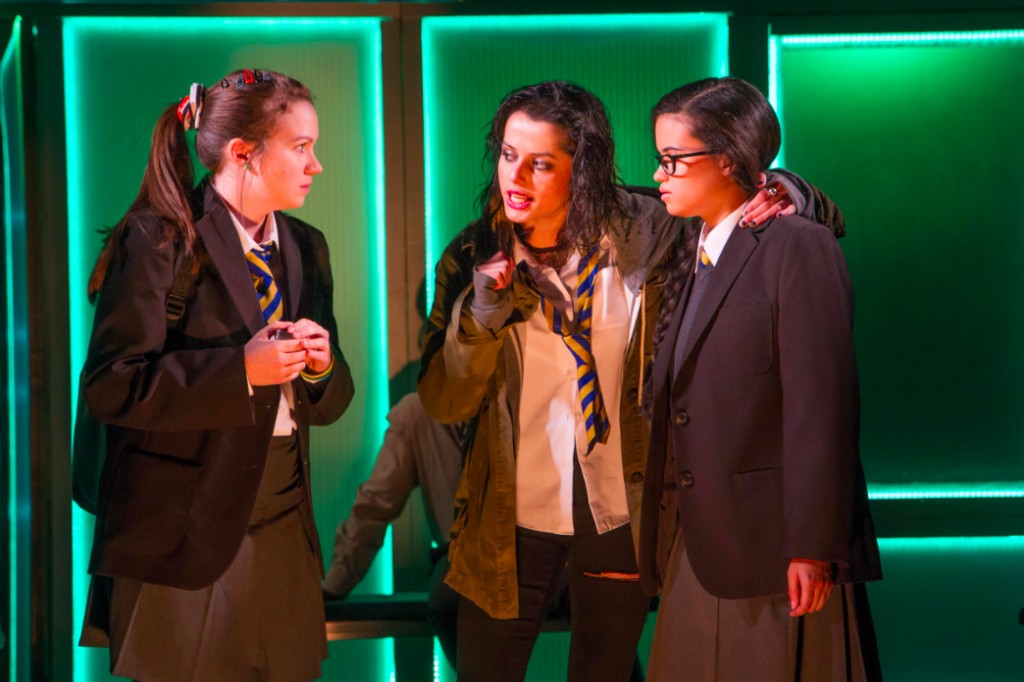 At first the play is hard to unpick. Where have the two London schoolgirls come from, as they jump in and out of quick flashbacks heralded by Anna Watson’s comic book quick lighting changes and Alma Kelliher’s sonic super hero stings? Is Kalki real or imaginary, conjured up by the two friends in order to reinvent themselves, to find their super hero selves and stride around in ‘thigh boots’ rather than ‘cower in the alleys’? [Neither option is appealing; surely there is another way?] One would assume she is made up- Kalki seems like a humanoid and comments on how she hates humans and Kapil’s great themes are about examining the displaced, the outcast, and the third culture children who have never been able to fully connect with their parents and who have to ‘re-mythologize’ themselves in order to assume a new hybrid cultural identity. Kalki, who is both a destroyer and protector, seems a natural imaginary reaction to the mean shop owner who prevents one of the girls from reading her favorite comic books, or the school pupil who sexually humiliates the other friend in front of a laughing playground audience.

But the play, an exploration of young femininity in a world of multiple faiths and complex cultural systems and art forms, might be sending out polarized messages about what it means to be young and female in today’s London, a geographical relocation by director Alex Brown. The two friends are given stark choices by Kalki, one of whom she nicknames Meat- ‘do you want to be devoured or fucked?’ when they visit a house party seems a miserable choice to have to make and where the only way to survive sexual experiences, is to hunt the beasts, who are men, and flay their skins, wearing them like trophies. ‘Not all boys are like this’ protests policeman Trevor Michael Georges when we listen to the details of the humiliating sex attack suffered by one of the friends, but there is not much to contradict this view in the girls’ minds. We are reminded though; of a pertinent theme- that the revenge the girls take out on the boy only becomes an ugly spectator sport and can only turn into further tragedy.

But although Kalki seems the main protagonist and perhaps invented because, as Voltaire is quoted, ‘if God didn’t exist it would be necessary to create him’ the beating heart of the play lies with the friendship between the two girls- Jordan Loughran is heartfelt as the girl who is ignored by Kalki because she has parents who take an interest in her life- as if somehow this makes her uninteresting, a sort of reverse discrimination all too prevalent in a modern society which only highlights the obvious underdog, but it is Angela Terence who provides a searching look at what might be really going on in a young woman’s soul in a story world that is otherwise supernatural. And ¾ into the play a brilliant monologue exposes her pain.

The Chronicles is a fitting end to The Edge of Our Bodies and Chimera, the other plays making up the trilogy in the Gate’s Who Does She Think She Is? Season- The Edge of Our Bodies explored sensory experience through a young pregnant teenager, Chimera exploded motherhood and identity through displaced DNA, here we have a play that explores tenderness in sisterhood, affirmation in love placed against potential annihilation and loss of self. 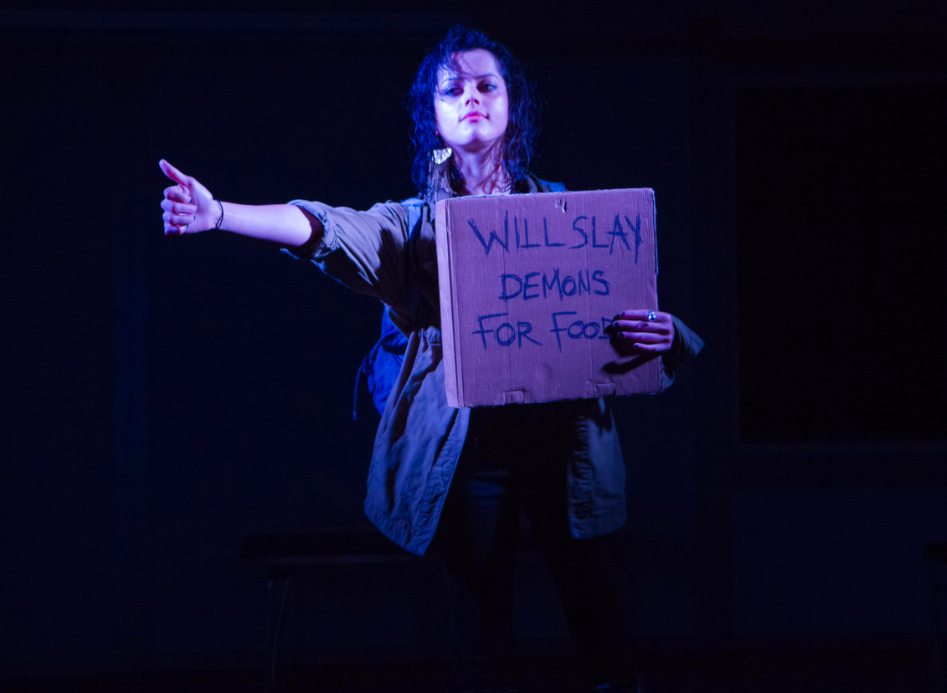 In an interview Artistic Director Christopher Haydon said he hoped the plays would look at the under-representation of women by exploring the perspectives of the personal, political and scientific. The Chronicles goes in search of those various under representations and identities that can be held in the same woman- the woman who wishes to wear c cups but also thigh boots yet is quite happy cowering in the alley too, like Kalki she is a torturer but also a redeemer and someone who yearns for love, which also means, she might also destroy it in others. All of this is explored through the lens of self- discovery and identity in a postcolonial world.

A European Premiere, The Chronicles, with the three girls making a sympathetic trio and gently supported by Trevor Michael Georges, is a fast ride, it’s cool and sharp like an addictive graphic novel should be yet it hides, in amongst its many layers of meaning, a warm beating and affirming heart.

The Chronicles of Kalki continues at the Gate until 31st January