Review of: The Caucasian Chalk Circle

In today’s no holes barred climate where we are far more used to attacks on religion, politics, inequality and injustice, we may be forgiven for believing that a new production of Brecht’s The Caucasian Chalk Circle can’t have any relevance for modern theatrical audiences that are becoming increasingly liberal in their thinking and far more globally aware. 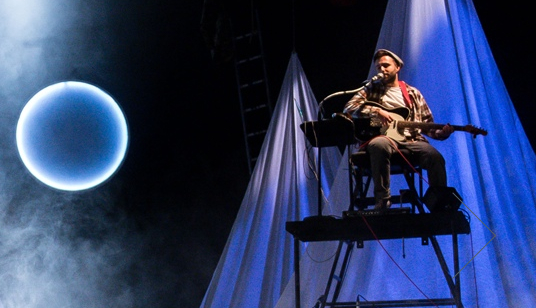 But these sentiments would be to misinterpret Brecht’s original intention behind Epic Theatre- to make his audiences- in this case 11 year olds plus at the Unicorn Theatre- uncomfortable and moved into questioning whilst experiencing, in Amy Leach’s ingenious production of Frank McGuinness’ translation especially, the contradiction between learning and enjoyment- which here, go hand in hand.

The extensive prologue, setting out the play’s political moral, is replaced with an informal chat by the 7 strong cast, who touch upon subjects ranging from global inequality [a collective gasp from the audience here as they are told the figures] to understanding the perils of cheap goods in our supermarkets and the question of ownership and entitlement, eventually introducing the play’s main themes.

Then, through a mass of varying theatrical tricks and devices, including shadow play, puppetry and a singer turned narrator a top of a very high chair controlling sound from a Mac book, we are flung into the nail-biting story of Grusha as she rescues the abandoned infant of the executed Georgian Governor, whose mother leaves him when she flees to safety and away from approaching rebels. For the next two hours we are on the edge of our seats as we watch Grusha face all manner of challenges in her quest to protect the child. Finally, in the form of Azdak the wise and the judge, the law catches up with her when the now returned mother demands the baby back- Brecht here drawing on ancient Chinese myth and stories from Solomon, to make his story a parable.

It’s been a long time since I saw a Brecht play, the most recent being the brilliant Mother Courage at the NT and The Good Soul of Szechuan at the Young Vic, both productions terrifically drawing back the curtain on Brecht’s politics and revealing his talent for emotionally engaging story telling. This production follows suit, the cast’s energy and dedication seems unstoppable, particularly from Kiran Sonia Sawar as Grusha and Nabil Shaban as Azdak, who conflicts young hearts and minds with his self promoting corruption and yet foolish wisdom, which in the end we all wish to trust in.

It’s also good to see a production holding the attention of a young audience for so long and with such panache and fearlessness. I lost count of the oohs, ahs, shouted out ‘no’s’ and cooing coming from an engaged audience at the performance I attended. This production also gives them a chance to experience the ingenuity and magic that can be created with just a few props and a little music.

It may be Brecht but this production had its young audience on red alert and it is good to see that theatre in London, for the young at least, retains some vision and theatrical freshness.

The Caucasian Chalk Circle continues at the Unicorn until 21st March