Review of: Out of The Cage

A play of two halves, there’s a lot to take in in Alex McSweeney’s premiere Out of The Cage, which he also directs and which focuses on the gender struggle fought by ‘munitionettes’, women drafted into TNT factories to help the WW1 effort. 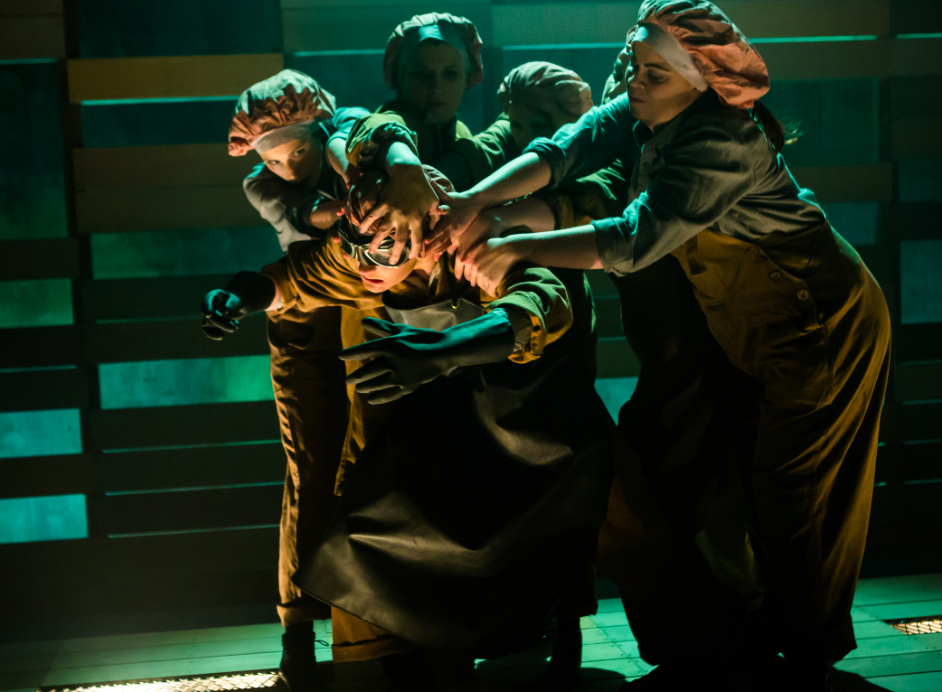 Out of The Cage, Park Theatre, Photo credit Richard Davenport

At first, it’s a little like watching a Ken Loach film, as the women, from a factory based in the Silvertown ex chemical works, galvanize against unfair pay and working conditions and gather to finalize subversive action against the ‘management’. Difference of class, health, religion and politics are all represented and topics from who the ‘Paddies support’ to the raging proletariat against the well meaning upper classes, are given stage time. We learn quickly that divisions reign within the united, everyone is busy evaluating how much more they are discriminated against than the person next to them, each has her own bitterness and story to tell.

The detail in Alex McSweeney’s play has to be admired; from Tegen Hitchen’s courageous TNT poisoned Dee Jessop to Sarah Madigan’s passionate Bolshevist inspired Nelly, who spits against the sanctimonious upper class suffragette Nancy [Katherine Tozer]. Milly Finch as Jane Bypass keeps it together as she battles with her own conflict between the drive for political activism with the desire to nurture and protect. Women are not natural destroyers of things we are shown here, although their embodiment of a very ‘male’ language, which they fling at each other like their own little blue bombs, especially from mouthy Carrie [Lindsay Fraser] and Annie [Emily Houghton] proves they have not yet found their own words.

Other than as metaphor or inhabiting a linguistic presence, the male never makes an appearance. It or he is in the overhead drone of a Zeppelin or the dreaded furnace, never seen but existing off stage as if also some inverse womb or black hole out of which the objects of war and terror are made. And if the women would be considered suspect terrorists today for their secret meetings, they were also legal terrorists then, sanctioned by the government to make those killers. At one point a character puts forward the idea that if everyone stopped making bombs, if everyone- the women- went on strike in all the warring countries, there would be no conflict. But the women have to convince the authorities that they are every bit as good as the men and the war gives them this opportunity. But the price of contemporary freedom is women like these selling their bodies and souls to be men, not just as good as them. This play teaches that there is no freedom without blood and there are many different kinds of blood being spilt here.

Imagery is a mix of styles. In the meeting the women rotate around each other as the spotlight falls on the one whose story must be told- at these points the women do inhabit their own story telling language- but we also think of dolls spiraling round and round in a music box. Are we asked to doubt their abilities? Later, as the women defrock, donning the overalls that are gender neutral and repress sex and individuality, we see what they are made of as they begin their long shift work. Heather Bleasdale as the factory gaffer, or Ol’ Mum, plays God- a God who at once encourages war and love and individualism and can only be poetical if her language is masculine. Dee too can only be passionate when she thinks of her spirit flying with the bombs she makes, their killing message uniting her with her man fighting somewhere out there.

James Perkins’ modern wooden floor stage allows us to think of today’s office. Of fights for the LLW, the fight for women’s equal pay that is still going on. John Chambers’ techno soundtrack, the beat of the factory’s heart, also gives a rather Dancer in the Dark feel. There is something monstrous and forbidding here and now we don’t think of munitions factories, we think of sweatshops.

There is an ambiguous end to a play which tries to deal seriously with feminist themes and gender issues and it may be undermining.

But still, many of its preoccupations strongly echo today’s political concerns- it is a topical play and therein lies its strength.

Alex McSweeney makes some brave experimental stylistic choices and a passionate cast, with a sensitive turn by Jill McAusland as Lil’ Ginny,  complements the play. Out of The Cages successfully shines a light on today’s social and political concerns as well as asking us to contemplate the sacrifices of the past.

Out of The Cage continues at Park Theatre until 14th February