What sort of a play would you expect to discuss ‘worthy empowerment’ as opposed to ‘worthy entitlement’ or ideas of wiping away ‘class and deferment’ to ‘incentivise… a shared purpose and unity’? 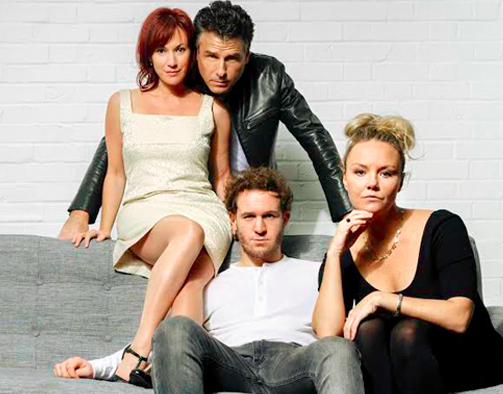 Perhaps not the premiere of Michael Kingsbury’s new play Contact.Com, directed by Ian Brown, a farce about the perils of partner swapping and a night of non- monogamous behaviour between middle class couple industrial psychiatrist Matthew [Jason Durr] and charity worker wife Naomi [Tanya Franks] and the less well off Kelly [Charlie Brooks] and Ryan [Ralph Aiken] from a Wandsworth that’s full of ‘hatred and recrimination’. The two couples meet after answering each other’s dating ads for a night described, in Matthew’s words, of ‘bravery’ that encompasses ‘spiritual enquiry.’

But Contact.Com is a farce and farce allows for implausible plot lines, exaggerated characters and slap stick- all elements to be found here from the revealed impossible darker intentions of the Wandsworth couple, Matthew’s liberal left idealism and the ridiculous cellulite busting exercises we all know Kelly must have got from the Daily Mail.

Whilst light and humorous, it is true that Contact. Com gives us some London centric clichés through an exploration of a wealth of conflicting language and style. Kelly and Ryan refer to Brockwell Park as the countryside and at dinner talk about ‘respecting mushrooms’ in flat south London accents and yet lapse into an incoherent poetical style with lines like ‘tongued off the top with a tear’, contrasting with the more pseudo intellectual rhetoric, also false, employed by Matthew when he talks about being on the ‘frontline with the disappointed’. But both couple’s fronts and lines are thrown out of the window along with the ‘loin of monkfish’ when the talk gets down to sex, Matthew’s pubes and what each couple may get up to in the shower.

Yet there is not much sex. Rather the farce is built around words, revealing their own eroticism and crudeness, and none more so than when Matthew’s hidden sympathies for the excluded are revealed and his desire to include Kelly and Ryan within his own social structure.

The play does expectedly reveal the problematics that any relationship may face in the light of the scrutiny that such a sexual experiment will throw up. But without knowing it, Kelly and Ryan are looking for political articulation and inclusion and Matthew is their willing supporter- and thus what is revealed by a writing style that is a mash up between Dennis Kelly and Simon Gray, is one of the true hearts of the play- sympathy for the excluded.

With some wonderfully frazzled and exaggerated acting from an excellent cast, Contact. Com is ridiculous, as a farce should be. But it presents an interesting and enjoyable writing style as the seriousness of the play’s themes grapple with its absurdist tendencies.