wounding and merciless, with a terrific performance from Sam Troughton

‘You really are a bitch’

‘Be a man Thomas, and then someone might find you attractive.’ [really?] 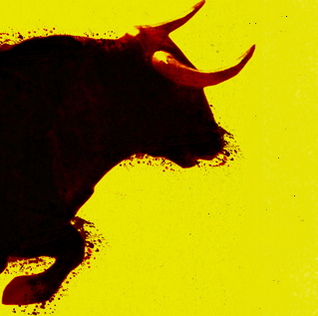 So goes it in Bull. A complimentary play to Mike Bartlett’s Cock, about antics and control in the bedroom. But here we have control in the boardroom where Thomas [Sam Troughton] Isobel [Eleanor Matsuura] and Tony [Adam James] wait around in the corporate ring designed by Soutra Gilmour, for Carter [Neil Stuke], who will deliver some bad news.

Thomas, Isobel and Tony. One of them must be fired in a company reshuffle, Isobel and Tony are kindred spirits, perhaps they are fucking, we don’t know. Thomas- who never wanted to be called Tom- seems, from their perspective, an alien. He has bad breath, he has dandruff, he hasn’t got a girlfriend, he’s offensive, he slouches, he’s short, he doesn’t drink and he has wobbly bits- he just isn’t part of the team and this is enough to make Isobel and Tony, vying to stay employed, gang up against the man.

The story world is already decided for us, the reflection is this- that the characters are fully initiated into the corporate world, the environment is all about slay or be slain, we are in Darwin country. Perhaps it is good for the national soul and cathartic.

No doubt, the play is savage. The barbarisms are not savage though- the slights the characters throw at one another are just that- slight and just, well, petty. And non of it is quite believable. It’s as though the characters are playing a well written game, one they’ve all played before, with the ending in sight and like something out of a Charlie Brooker drama for Channel Four.

But. Where the play works and is savage, is on a deeper level. Thomas is a man thrown deep into provocation- like a Bull provoked by a conquistador, goaded on by a willing audience.

And somewhere in there, in the play, we are given the idea that Thomas is stupid and so, deserving. He can’t see what is being done to him and rises to the bait every time. How can that be good for the workplace? Thomas can’t be absorbed, he must go. Does that excuse Tony and Isobel?

I guess everyone must be agreed about this. We know who the awful people are [everyone], even as Thomas is criticized for being ‘personal’ and believing in a ‘meritocracy’ where the good win out in the end. In reality, the concept of goodness is far more complicated [ I miss the complication in this play- it is never quite so black and white, no matter how much we want to believe]. But we are watching a form of ethnic cleansing take place.

So Bull speaks to something far deeper in us. The desire to kill off the weak. That primal desire the bully feels when he knows- or rather and more importantly, believes his victim is weaker than him. The mistake though, from an audience point of view, is to view this as so. That the victim is weaker. The genius of this Young Vic production, in the round in the Maria studio, is to make everyone complicit- without realising. But Thomas is not stupid and weak because he cannot stand up for himself, rather, he is just innocent. He won’t willingly trade slights unless he is angry and then his anger takes over. Then he becomes stupid because he is guided by passion [see Zizek’s essay on the recent Charlie Hebdo atrocity]. But he is not an idiot unless he is an innocent one- in the Dostoevskian sense of the word.

In the end, this play is really about the audience, where they form a fifth character- passive and in their passivity, or nervous laughter, so complicit. Do brutality and laughter go hand in hand? Marvelously here. Who is having the last laugh? The playwright or the audience, as Thomas sprawls on the floor, metaphorically killed?

Wounding, Mike Bartlett’s pen for a sword is merciless, Bull continues at the Young Vic until 14th February.