Review of: The Way Back Home

Primary school children were very much involved in the staging of The Way Back Home, a new opera for children brought by the ENO in a co-production with the Young Vic, Opera National de Paris and The Royal Swedish Opera, directed by Katie Mitchell and performed in the Young Vic’s Maria Studio. It’s the ENO’s first opera for kids and an adaptation of Oliver Jeffers’ book of the same name, where a boy discovers an areoplane in his house and flies to the moon, where his adventures begin. 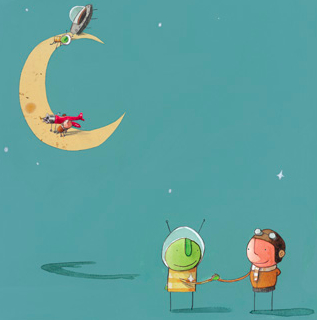 I don’t know the book and I have no children of my own and I don’t see enough opera to be an expert, so I find it hard to give this production a proper critique- if anything, it should be the children themselves who are asked to put pen to paper and give the work a proper review- after all, the show is meant for them and not for adults- it is supposed to introduce young children to opera, ages 5+. And then how wonderful it would be, if a competition were run to find the best review written by a child, with their critique going up on the Young Vic’s website in amongst all the adult professionals- what better way to engage with the younger audiences, include them as part of the discussion and take their views very seriously indeed?

But to the production itself. We start with the entrance of the conductor, wearing a onesie and an orange clown wig, as dictated by the school children themselves. We are then introduced to the 4 Gizmos, a slight alteration from Jeffers’ book and providing narration and sound FX throughout the show. We then get properly into the story of the boy who lives at home with his only friend, a penguin- whom it must be said, he bullies a fair amount- before flying off to the said moon.

So far so good. In terms of theatre there is much schools can discuss- aside from the fact there is a lot of meta theatre there is also a resistance to using modern day technology to get across mood, tension and feeling and change of scene- instead we almost feel like we are being transported back to the time of Shakespeare where metal sheets were shaken to give the effect of thunder and where specialist actors produced all the sound effects. So we have here, and as well as clouds moving on wires, birds, and stage managers visibly moving scenery, the set design also changes at the back like an old Fisher Price Two Tune or a Tickety Toc Musical TV.

Yet, although not a small child by age only, I couldn’t help but balk at the music. Although wonderfully written, who is the music for? We know whom the story is for. But do young children like music that sounds atonal and has dissonance? I’m not sure although I would like to be proved wrong. But I come from a family of classical musicians and I can’t ever remember liking such music until I was around 17 and saw Simon Rattle’s wonderful channel four series ‘Leaving Home’ when I was finally ready to accept Schoenberg et al- but even then it felt attractive only because I felt I was rebelling and within a social and political context. Without first being acquainted with perhaps the more harmonious tones of Mozart or Beethoven or any history of classical music, are such young children ready for this very adult and sophisticated affair? I’m not sure. And why does modern mean we have to have such disharmony all the time? Are the kids old enough to understand it?

In this sense it feels like the opera is a story for kids with music for adults. And it also feels an exclusive affair. I am sure it is for health and safety reasons but it is dismaying to walk into the Maria and find a big rail separating the audience from the small orchestra and the stage. Kids need to get close, to feel as though they can be a part of it and play the instruments, but here it feels like ‘you can look but can’t touch’.

This affects the performance as a whole. Although directed amazingly as expected, with the fantastic quirky performances that are the ENO’s trademark, there is something missing. And it has something to do with that rail, the orchestra and the singers all somehow being very separated from the audience. I normally love and have always done, all of the ENO’s work at the Young Vic, which I have been privileged to watch over and over- yet then the experience was very intimate, very close- which is what I believe opera needs to be and why I refuse, apart from not being able to afford the tickets, to go to the opera houses- because then the experience becomes very dehumanized. But somehow here, the effect is the opposite. I wanted, perhaps like the children, to reach out and touch, I wanted to be able to feel the Gizmos were not out of reach and I could interact with their intense seriousness – even if really it was not possible, I wanted to feel as if it were- but I felt I could not.

Which means I will have to explain why I have given the work 4 stars. Firstly, there is no such thing as a half star. And secondly, I really want people- kids- to see this show and engage and then give their thoughts. Because the ENO are trying to do something important and it is the intention and effort that are remarkable here and worth applauding and the reason why I have to give it 4 stars- as well as because of the brilliant performances by all concerned.

And- I will be seeing the performance again, and who knows, I will probably change my opinion. The performance I saw was press night and lacking in children, which probably changed everything. Tomorrow, full of kids, it might be different. But go and see anyway and judge for yourselves. And take a child.

Based on the book by  Oliver Jeffers